it's sort of a deep 52Q this time, which is why it's taken me longer. first i had to think what i wanted to say...then i had to figure out how to say it...then it needed to be visual, as well.

question 24: "name something you don't understand, but want to" 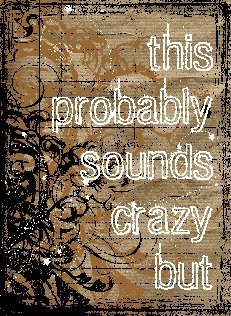 text reads, "this probably sounds crazy, but...i wish understood prejudice. not to validate it--au contraire!--but because it still seems to play such a dismayingly large part in our world, and it feels like the divides between religions, races and nations are becoming ever more deeply entrenched. maybe if we *knew* why so many people seem to hate each other ON PRINCIPLE, without even knowing each other, there would be something we could do on a "grass roots" level to try and stop it?" 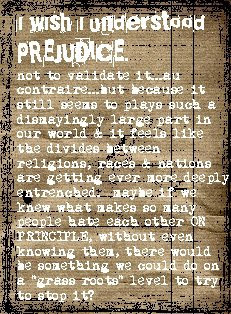 i have to confess that several times in the course of working on this, i considered changing my answer and just saying, "spanish"!* but the more i thought about it, the more i realized that this is my real answer, so i just kept plugging away until i had something that vaguely expressed how i have felt from the first time i heard a racial slur, in about third grade... (which i had ask the speaker to explain to me; which must've rather taken the wind out of his sails, to have a gangly and earnest 9-year-old interrupting to ask,"but wait...that doesn't make sense...what does that MEAN??!") ...to the present day. i mean, i am very GLAD i do not have those feelings...but on the other hand, i cannot help but think that this is sort of a vital thing. i know it's gotta be based on fear, but fear of WHAT, exactly? and is there anything anyone can *DO* about it??!
ok, see, i told you it got a bit deep. sorry about that. why don't we all take a little break now and enjoy a hilariously captioned cat photo or perhaps some baby zoo animals before we get on with our day? hope you are having a wonderful week, but if not...
hey! tomorrow's FRIDAY, darlings!!!
~♥♥♥♥♥~

*because certainly my spanish--which dates from high school--could use improvement; consisting, as it does of many nouns, some imperfectly conjugated verbs, a lot of friendly smiling, and what i'm sure is a hilarious tendency to break into MIME when i run out of words. lo siento, senor nissly! :)
Posted by lauren bergold at 8:26 AM

Email ThisBlogThis!Share to TwitterShare to FacebookShare to Pinterest
Labels: 52q, atc's, papercrafting (but not cards)