i don't make a ton of cards "on commission" so to speak... (well, seriously, have you SEEN my cards?! yeah. exactly!) ...but my friend trish asked if i would make a baby card for her boss, who is having a daughter next month. i made this one: 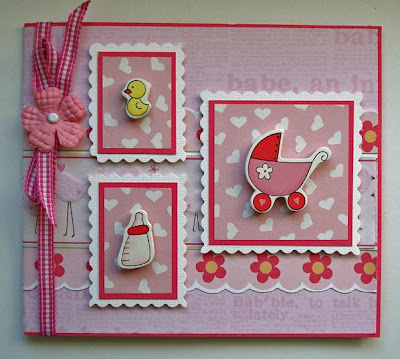 (cardstock: bazzill, ranger; patterned paper: design originals, heidi grace, 7 gypsies, 3 bugs in a rug; dimensional embellishments: paper studio; flower: prima; brad: doodlebug; ribbon: michaels)
...and i KIND OF like it...but it didn't really quite turn out as i had hoped. so then i had another go, in a completely different direction: 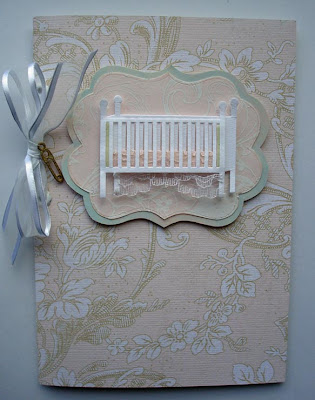 (patterned cardstock: wild asparagus; unpatterned cardstock: bazzill...but it's got basic grey swirly white rub-ons...that you totally cannot see AT ALL in this picture; iridescent cardstock from an old greeting card; dimensional embellishment: sandylion; brass charm...which is not nearly as darkly tarnished as it looks...sigh; ribbon: michaels)

...and i kind of like it, as well. although neither card is exactly to my liking, i should point out that both are easily 1.7 times nicer than they appear in the photos...which for some reason are HORRENDOUSLY lit...even though i was under the impression that i was in adequate sunlight whilst taking them. perhaps i made a mistake in photoshop and instead of clicking "auto levels" i hit "diabolical levels"??! but i don't have time this morning to pursue what my friend tracy calls "the uber-scan" so you will just have to trust me that they're just a bit cooler than this!

happy memorial day weekend, american darlings!
(and an equally happy regular weekend to all other darlings!)
Posted by lauren bergold at 8:20 AM