making cards over the weekend-- (first the baby ones from my last post, and now these) --cards in which i am going for a style that is more to the recipient's taste than my own--it occurred to me that i have some really, REALLY strong card-making habits of which i was not entirely aware. for example, i like inked/outlined/distressed edges. i like them a lot. in fact, i think i may have become *slightly* addicted to them. because it turns out, when i make cards with very clean lines...say, perhaps, four in a row...i start to feel pangs. i think the next item i make will have to be really really grungy...with lots of layers...and distressed fonts...and a wholllllllllllle lot of completely extraneous rhinestones. yeahhhhhhhhhhh.

but in the meantime, here is an anniversary card that i don't entirely dislike: 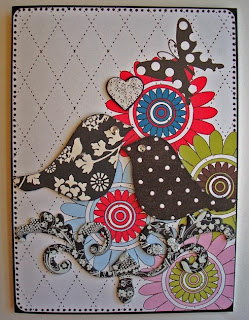 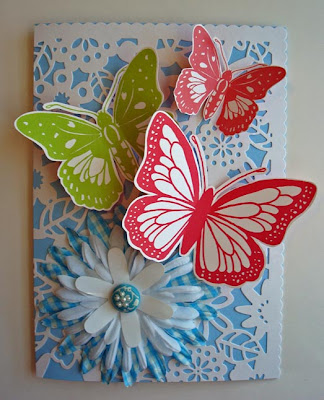 (cardstock: bazzill; lace cardstock: creative imaginations; butterfly patterned paper: american crafts; florals: prima, junkitz, heidi swapp; flower sequin: queen & co; brad: making memories)
the latter is for my aunt, whose favorite color is......wait for it......white! every year i try to make a mostly white birthday card with clean lines and simple shapes, and every year i fail, totally. (well DUH, cause i'm *me*!) ...but this year...i think i got pretty close. at least, i hope my aunt will think so!
...now where did i put those rhinestones...?! :)
Posted by lauren bergold at 7:41 AM