...than a Traveler's Notebook and Everyday Explorers Co. Stamps? Ok, sorry, it's a trick question, because as far as I can tell they are the perfect pair! Which makes it especially awesome that you can get both at The Ink Pad! You can also read all about exactly which things I used to customize the month of January (and this past week) on The Ink Pad Blog today! 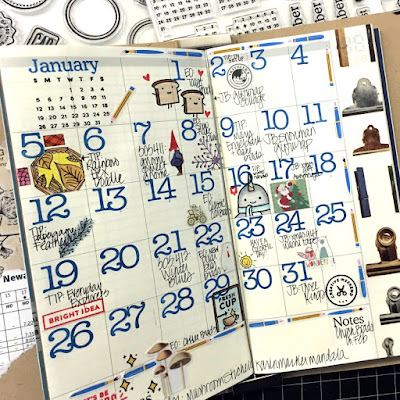 Posted by lauren bergold at 9:00 AM No comments:

Look What Santa Brought Me!

This fortnight at Jingle Belles we're giving you a chance to show off the fabulous new crafty gifts you acquired over the holidays. Or, if you were somehow (mistakenly, of course!) on the naughty list, you can swap in something you treated yourself to in the January sales; or even just an item you've had for a bit but not yet used. Sound like fun? Yeah, we thought so too! 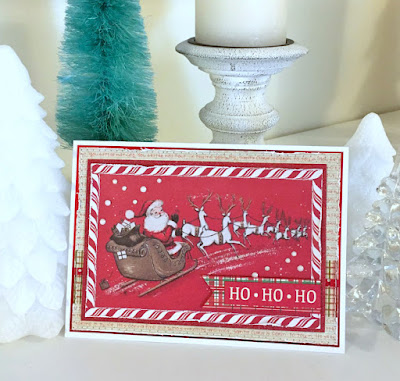 My friend Gina knows how much I *LOVED* 2018's "Jingle" collection from Authentique, and that I'd be super-excited to revisit it; she found a complete set that even had the cardstock stickers and punch outs! So my plan for this week was basically to use as much of it as possible on one A7 card and I have achieved that goal, having used an oversized journal card, two pu nch-outs and some patterned paper; which I supplemented with red glitter and shimmer cardstocks, plus a few elderly white gems which suggested snow (sorta) to me!

Hop over to Jingle Belles to see Stephanie's card and link up your own masterpiece!
Posted by lauren bergold at 12:00 AM 1 comment:

What do you get when you combine Lawn Fawn's adorable Winter Narwhal stamp, Eyelet Outlet's colorful Snow Boot brads and a blendy, splashy Distress Oxide background? Probably something a bit like this. Hop over to The Ink Pad Blog for the whole story! 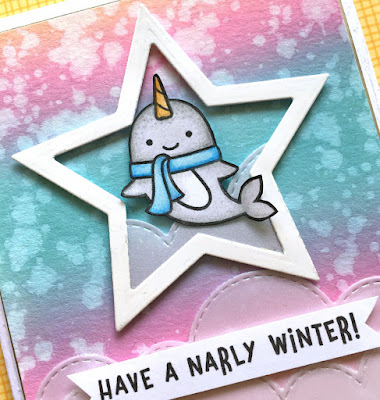 Posted by lauren bergold at 9:00 AM No comments:

I'm taking you on a (metaphorical) road trip today, because my Eyelet Outlet Classic Car Brads are all revved up and ready to roll! 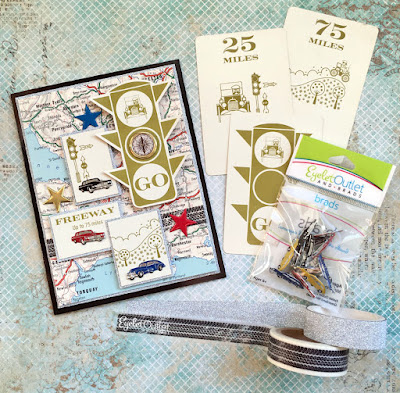 Possibly my all-time favorite type of "found" paper is old maps. They are great in collage, they are terrific as giftwrap (the big folding ones, especially!) and they are fantastic background for a masculine card! You don't need a particularly old map, even quite recent ones can be lovely and thanks to all the GPS-users today, you can often get an armful of maps at a garage sale for a dollar or so. The other vintage ingredients I used are a few playing cards from a game called "Touring"; an incomplete set of which I was given for Christmas from someone who knows how much I love old paper, lol. As soon as I saw the road trip motif I knew they would be awesome with the Classic Car Brads and I stand by that belief! Since they were the size of standard playing cards I needed to trim them down in order to fit a few of my favorite bits onto one A2 sized card. I fussycut the traffic light and added a Compass Brad to the center circle. 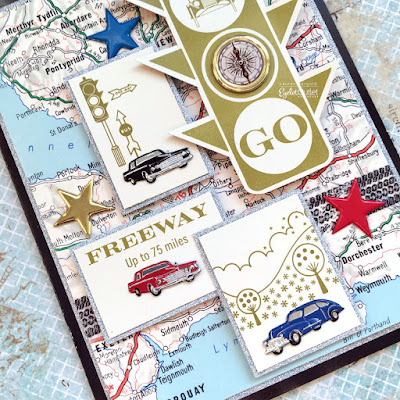 I matted my trimmed-down mini cards, as well as the map panel, on cardstock I adorned with strips of Glitter Silver Tape. I ran a strip of Tire Track Washi Tape around the center of the card and at the very end I added a few Star Brads. Et voila! 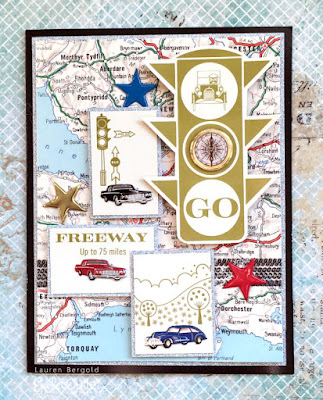 I bet you have some outdated maps and maybe even a game or two which doesn't have all its parts. I also bet you could match them to some Eyelet Outlet Brads and Washi Tape to make a beautiful and unique card for someone special! ♥
Posted by lauren bergold at 3:00 AM 1 comment:

I've set the stencils aside just this once, because the last time I was at The Ink Pad I fell in love with these gorgeous Feather Stickers and I just couldn't wait to use them! 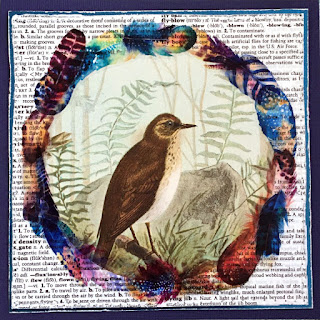 And YES, for the record, I used the whole entire packet on ONE CARD! Which is the crafting equivalent of eating the entire pint of ice cream... but luckily much less fattening. These gorgeous stickers are diecut and translucent, so you can layer them on top of each other, and/or whatever pretty papers or collage you'd like to use them with. In this case I framed a vintage bird illustration with a round frame I made of dictionary paper backed with cardstock to strengthen it. But this idea would also work perfectly with the vintage-style illustrations from a Pepin Paper Craft Book, or, for that matter, you could frame up a lovely family photo!  I cut the center out with the largest of my Lawn Fawn Circle Stackable Dies, then arranged the stickers around the edge, letting them overlap each other a bit. I distressed the edge of the dictionary paper panel, mounted it on some beautiful teal Idea-Ology Metallic Jewel Cardstock and then machine stitched around the edge to attach it to a dark blue 6" square card. 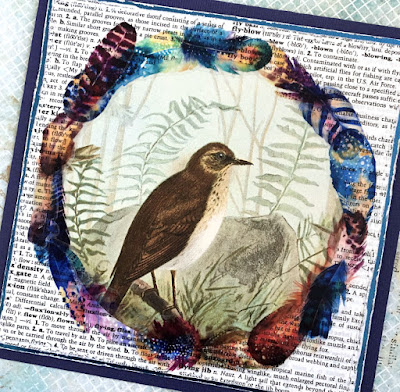 I think I need to head back to The Ink Pad for a few more stickers... BRB! :)
Posted by lauren bergold at 9:00 AM No comments:

We're still making holiday cards with leftover bits of giftwrap and tags at Jingle Belles and you're still invited to join the fun! Here's what I made this week:

I've got three types of giftwrap on this card: the snowman was fussy-cut from one pattern; (with a second layer of scarf, hat and carrot nose... since one nice thing about giftwrap is the repeating pattern!) the red snowflakes are a second variety and the white snowflakes are tissue paper which I fused to a piece of Xyron-ed cardstock so it would be sturdy enough to diecut into snowy hills.

As a matter of fact I made two (very similar) cards this week, because after I finished the first one, I sort of fell violently out of love with the red snowflake sky. And since it is giftwrap, and I did have more of everything, I let myself have a do-over in which I swapped in some patterned paper with a softer, bluer, snowy sky. 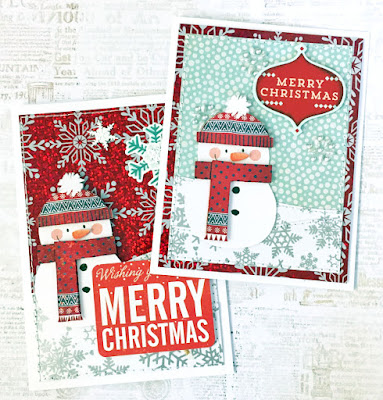 Stephanie also has a lovely card to show you AND you might like to check out the original post over at Jingle Belles because I thiiiiiink there just might've been a fun little prize this fortnight...
Posted by lauren bergold at 12:00 AM 2 comments:

I'm fairly smitten by a new, just slightly snarky, line of Mary Engelbreit cling stamps called Mary Engeldark. This set is called Have My Cake and Eat It Too and it's the perfect star for my shaker card, which is on The Ink Pad Blog today: 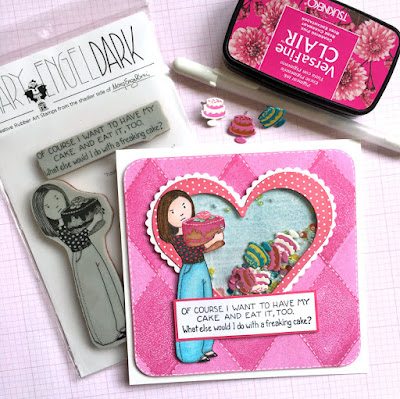 Posted by lauren bergold at 9:00 AM 3 comments: