(sorry if you're getting a bit bored of non-stop paper adventuring, but i am THRILLED to be ticking these off m'list! take heart, card fans: tomorrow there's a brand new CAARDVARKS challenge & a very silly, whimsical card to go with it!)
another paper adventure topic, another digi-page to support it. (when i've got a lot to say, it's just easier!) this time we're talkin' history. as soon as i read the prompt, i knew what i'd write about. watergate made an indelible impression on me at a very young age, and continues to influence the way i see the world and our political system. 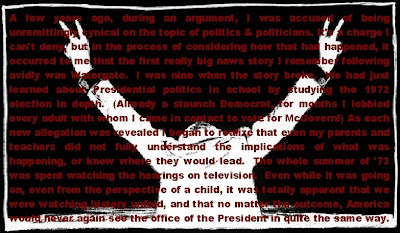 (software: broderbund printshop; photo of richard nixon from t'internet, reversed & printed on kodak premium photo paper; font: arial...just for stef...)
text reads, "A few years ago, during an argument, I was accused of being unremittingly cynical on the topic of politics & politicians. It's a charge I can't deny, but in the process of considering how that had happened, it occurred to me that the first really big news story I remember following avidly was Watergate. I was nine when the story broke. We had just learned about Presidential politics in school by studying the 1972 election in depth. (Already a staunch Democrat, for months I lobbied every adult with whom I came in contact to vote for McGovern!) As each new allegation was revealed I began to realize that even my parents and teachers did not fully understand the implications of what was happening, or know where they would lead. The whole summer of '73 was spent watching the hearings on television. Even while it was going on, even from the perspective of a child, it was totally apparent that we were watching history unfold, and that no matter the outcome, America would never again see the office of the President in quite the same way."
Posted by lauren bergold at 8:01 AM