hooray for moving right along on the paper adventure front!
can i just say (AGAIN) that i am so pleased that i did not give in to my inner critic's nasty little voice; you know, the one that was trying to tell me that being behind by 10 or so weeks, and actually out of the year we were documenting meant that i should forget all about trying to catch up, and mark up another unfinished item on my mental tally. i mention this only because--and i'm a bit embarrassed to admit it--i have, in the past, actually let that voice influence me...and missed out on *GOOD STUFF*!
duh!!!!!!!!!
this time, theme is music, and i decided to go uber-simple and just list the songs that were my particular i-pod faves right before xmas. (i always love seeing other people's lists...and i think someday this will be a cool thing to look back on!)
ok, so the page. you know that magic ingredient in crafting which suddenly transforms a few ordinary items into so much more than the sum of their parts? yeah...well...this thing has the antidote! i love everything that's on it...and i had fun making it...but the result does not fill me with aesthetic pleasure. am i gonna keep working and obsessing and tinkering until i get something that's perfect and FABULOUS??! nope. it says what i wanted to say, and thus i declare it officially finished! 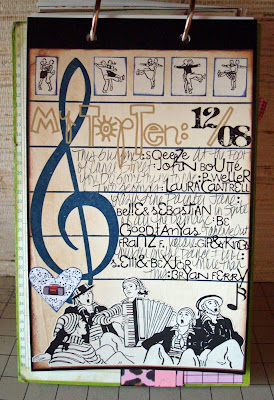 (vintage: endpaper from an old olllllld songbook & illustrations from another music book; glossy cardstock: ranger; music patterned paper: scrapbook wizard; rub-ons: ki, lil davis, autumn leaves; other: colorbox inks, uniball signo pen)
a couple of years ago i read something cathy zielske wrote, in which she described a similar sensation of being not entirely satisfied, but needing at that point to just be done with a project. and she summed up by saying, "sometimes 'good enough'...is good enough"! words to live by, folks! words to live by!
Posted by lauren bergold at 2:59 PM