this fortnight's challenge at shopping our stash is called "stencil me this" by which you'll no doubt have surmised we'd like to see projects which make use of at least one stencil. since i have quiiiiiiite a collection, i was spoilt for choice, but as soon as i found this pre-stenciled but mysteriously abandoned gel print, i knew exactly what i wanted to make:


if i had been smart, i would've taken a pic of the gel print before i began. but i wasn't, and i didn't. so i'll just tell you that it consisted of blue and purple vaguely floral blotches, on the dusty lavender cardstock. at some point i had used tim holtz's floral lace stencil to add a sort of messy layer of plain white modeling paste, and then, for reasons which now elude me, i put the whole thing aside. but as soon as i saw it, i was excited because i recently got the second set of "mixed media" thinlits, and one of them is a fragment of this exact stencil. which meant i could play with both the positive and negative space of the same shapes. which is always fun. i "fixed up" the modeling paste by outlining the bits of incomplete stenciling, backed the piece with some cardstock which matched my oversized blossom, added a tiny bit of machine stitching, and called it a day. 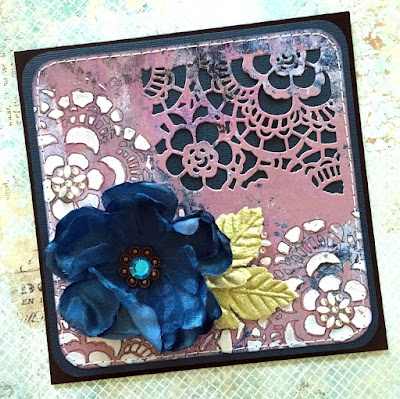 be sure to hop over to SOS and see the gorgeous creations of my design team sisters, then start planning your own stencil-centric masterpiece! ♥
Posted by lauren bergold at 6:30 AM