warning: if you're not into hand lettering, this post is probably waaaaaaaaaaaaaay too detailed for you, so feel free to skip it entirely OR catch the much faster flip-a-gram version on facebook or instagram! ♥ 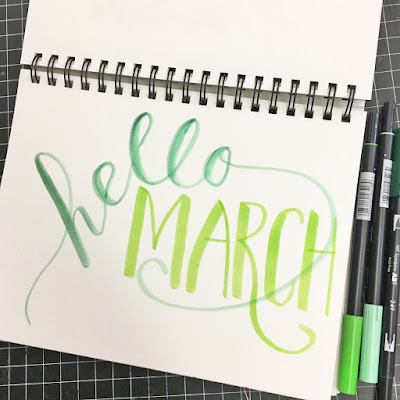 step 1: basic letters
i like tombow dualbrush pens for this, they have a brush tip on one end and a writing tip on the other, plus they come in like 90+ colors. here i've used a light green for "march" and for "hello" i used mint green, on which i picked up a little bit of dark green that i scribbled onto a piece of acrylic plastic. if you're concerned about super-neat spacing, you can measure or add guidelines. i'm a bit lazy about that so i tend to mostly wing it. sometimes, though, i will start at the edge of the page and spell a word like "march" BACKWARDS so it ends right at the edge like it does here. on these occasions, i generally take the precaution of writing the word on a piece of scrap paper, because trust me, it is not that natural to spell even common words backwards, and you can end up with MRACH much more easily than you might imagine. (ask me how i know!!!!!) 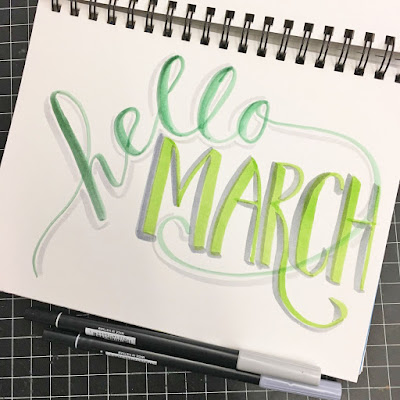 step 2: grey shadows
to decide where they go, you choose either the left or right of all the vertical lines, plus the top or bottom of all the horizontals. you can place them right next to the basic letters (as in "march") or with a small gap of white in between (as in "hello"). 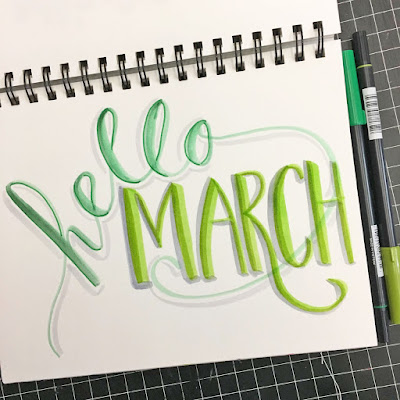 step 3: a little shading?
this step is completely optional, but you can use the next shade of green and either the brush tip ("march") or the writing tip ("hello") to add a little more shading. since this is related to the shadow, it's probably best to do it on the same side as your grey shadow. if the contrast is a bit too much, you can use the original shade of marker, or a blender pen, to downplay it a bit. 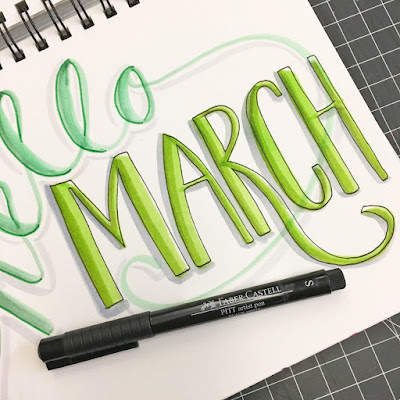 step 4: outline
i like faber-castell's pitt artist pens for this, in either the S (.3mm) or XS (.1mm) nibs. they are fairly permanent, but every once in a while i somehow manage to smear them, which is why i now do the shadows and shading BEFORE i outline. you'll notice there are some tiny gaps of white, don't worry, you just go back in with the original marker and a quick stroke along the white bits and VOILA... flawless! which means this is a great time to correct wonky lines or weird shapes; outline where the line SHOULD be, not necessarily where it is right now... if you see what i mean? 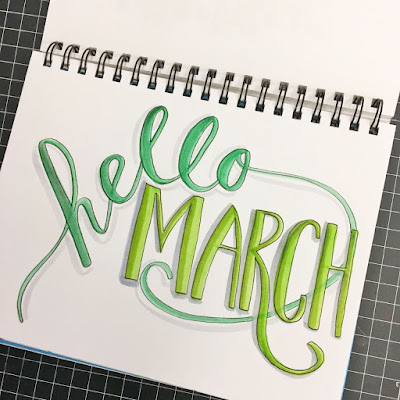 step 5: more about outlining
i could write an entire post just about this subject, but the main things to know is: you get better at it by practicing and practicing; then practicing even more. outline your own lettering, outline lettering and pictures in magazines, outline anything and everything. also, for a really smooth line, you only want to move the pen in one direction... either you push it away from you, OR you pull it towards you, but not both. it turns out, i'm a "puller". and seriously, from the very second i figured that out, my outlining game improved by leaps and bounds! you may also want to turn the paper around as you work, so you can slide your hand along more smoothly. finally, before you start each section of outlining, you want to know where you're going to pick up your pen for a break.
(i realize that when you're just reading this, it sounds very abstract, but hopefully, it'll come back to you when you're actually outlining something, and then it'll make sense!) 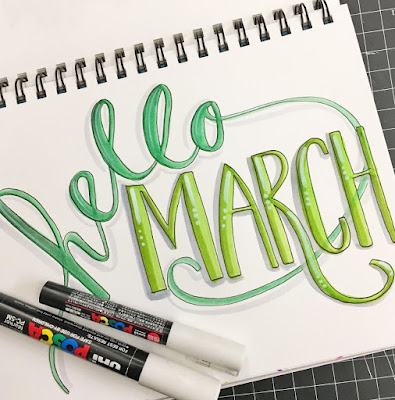 step 6: highlights
i like a white posca paint pen for this. the medium (used in "march") and fine points (in "hello") are my favorite sizes. as with the shadows, you kind of want to pick one area that the light would be hitting, and consistently place your highlights there on each letter. in this case, i'm up towards the top of each letter, and i've kind of echoed the curves a bit. 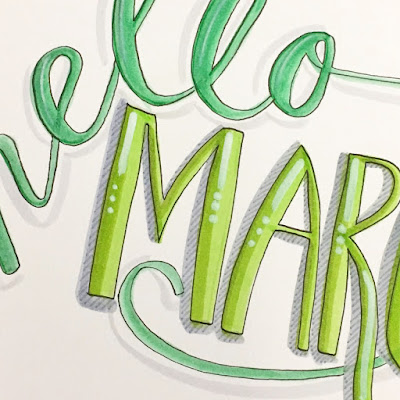 step 7: enhanced shadow?
another entirely optional step. i used the writing tip of the same shade of grey tombow to add some motion lines in the original shadow, but you could use black, white, or a coordinating shade of green; and it could be dots or stitching instead of the parallel lines. i stayed just on the word "march" for this, since it has the chunkier letters and thus can stand more visual weight. 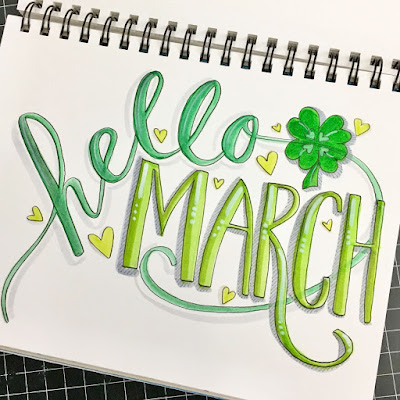 step 8: add some doodles?
again optional, but usually quite fun! in this case, both the shamrock and the scattered hearts are purely decorative, but i have been known to add hearts, stars or little dots to cover up smudges on my paper. in drastically mess cases, i've been known to splatter watercolor with a fan brush! ;)

♥
i hope you'll be inspired to try a bit of handlettering on your own. there are sooooooo many great examples on pinterest, instagram and youtube; whether you like videos, static pics or even examples of entire alphabets, you will be sure to find inspiration. also, magazines and websites with cool type and graphics are awesome; you can even mimic your favorite computer font or set of alphabet stamps. the possibilities are endless!
♥♥♥
Posted by lauren bergold at 2:00 PM