this week's challenge at shopping our stash is pretty straight forward: we want to keep you in stiches! or rather, we want you to keep US in stitches. or at least, we want to see papercrafting projects which feature stitching. it can be hand embroidery, machine sewing, or even the ever popular faux stitching. here's what i made:


ok, yes, everybody knows i looooooove to sew on cards. i sew as a design element, and sometimes also for security, because there's nothing more depressing than a card that arrives at its destination minus its beautiful floral focal-point; or with a few of its chipboard letters laying at the bottom of the envelope. in this case, the sewing is almost entirely decorative, but i really think it adds to the mandala design. speaking of which... *HOW* is it possible that i've been "into" mandalas for at least five years, i've made punched ones, monsta ones and giant decor ones; i've even got an entire pinboard called "many mandalas" which contains examples in every conceivable media... and i've never thought to make one out of the gazzillion old-school, flat paper flowers i still have from the days when those things were an absolutely *REVOLUTIONARY* embellishment in terms of 3-dimensional coolness?? well, not to worry, i'm pretty sure i'll be making up for lost time now! 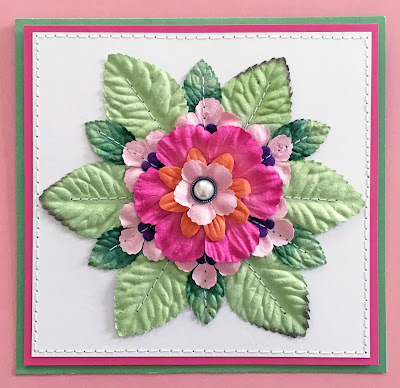 need some other ideas for incorporating stitches into your next project? check out the splendid work of the SOS dt, whose motto is, "sew far, sew good"! ♥
Posted by lauren bergold at 6:30 AM