i don't think there's been a week all year over at JINGLE BELLES that i didn't love, but i can honestly say that my ♥FAVORITE♥ weeks have been the ones for which we've had a lovely guest star, one who's helped us think up a fabulous prompt and come along a bit early to make a card with us to feature in our post. those are reallllllllllly fun weeks, and we've been lucky to have quite a few!*
this week, my lovely blogging friend, amanda profumo, was inspired by this style board at paper doll romance: 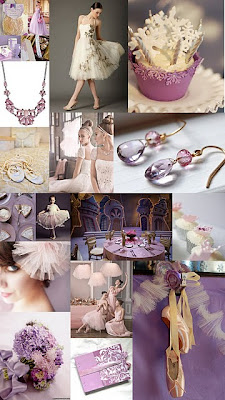 and thus we're all having VISIONS OF SUGARPLUMS!!! this time we're doing a "photo inspiration" rather than a color palette. so you can use ANY bit of the collage you like. you don't have to make a purple card... but hey, if you want to... go for it! i did, see? 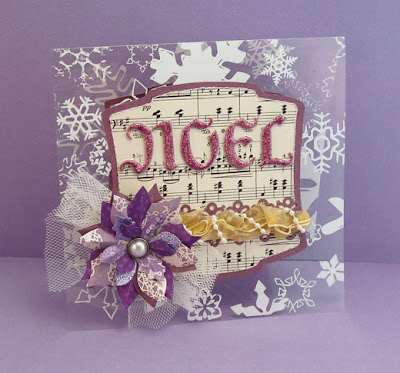 ok, so you know i'm a big fan of pink, but i have to say my "purple awareness" was raised a couple of years ago when niece lindsay officially announced she was changing her favorite color from pink to purple.** something i learned pretty quickly is that FABULOUS purple accoutrements do not abound, year in and year out, in the same way that pinks ones do, so it's important to grab them when you see them; and also to stock up on purple paints, copics and spray mists in order to tint things to the perfect shade. i did just that on this card with my fancy gothic thickers (that were originally a dusty pink) and some pink paislee mistable papers that i cut with a poinsettia die and mixed with other store bought patterns.
my inspiration from the style board was pretty thorough: i liked the snowflakes, the flowers, the ballerinas, ALL of the colors, and the gems!!! so i tried to work in a little bit of all of that, while still putting my own laureny spin on the thing, and i'm quite pleased with the results. what inspires you in those photos? maybe it's everything... maybe just one small element... but whatever it is, use that as your starting point and see where it takes you; and then come along to JINGLE BELLES before 6pm next wednesday and share your card with us, because we'd love to see it!!!
*we're still feeling quite greedy for more, however; so if you have an idea or sketch or fabulous color palette to share, email us at jinglebellesrock @ hotmail [dot] com because we'd love for you to join us, too! ♥
**i love being so firmly established as "the crafty aunt" that my nieces and nephews know that this is the sort of thing they should tell me well in advance of their birthdays!!! :)
Posted by lauren bergold at 12:04 AM