it's true! missus trash does in fact have one of the loveliest daughters around: she's VERY mature. she's extremely intelligent. in fact, she is completely sorted out**. i am hoping when she's old enough to travel alone she will dash over here and give me some tips, actually! :)

so obviously when her mama asked if i would like to make a bit of a card for her birthday i wholeheartedly said, "YES!" after a bit of questioning, i learned that her favorite colors are purple, champagne gold & silver; that she prefers somewhat muted tones to mega-brights; that she likes the little banners i've been putting on cards lately; and that some meaningful words to her are "love" and "life" and "peace". i let all that swirl around in my brain for a bit, and this is what emerged: 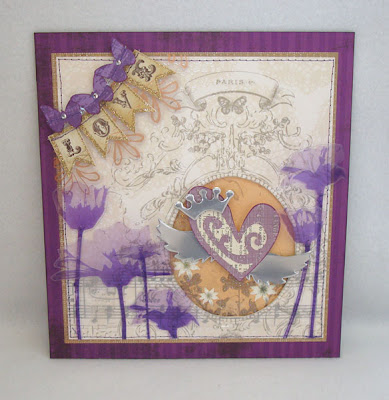 i started with the cool heidi swapp "mistable" paper as a background because i thought it would look great dyed purple. and it did look great...but...i lost all the detail on the fabulously ornate frame element, so after a bit of experimenting and attempted adaptations, i did what i rarely do: i went back to the lss and bought more of that exact same paper! i think it was a good call. i like how the purple and gold and silver bits pop *more* by being on the pale creamy background. 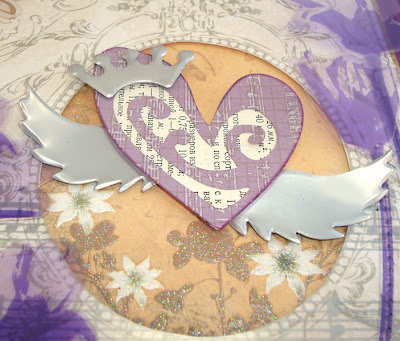 also... had i not made that trip, i wouldn't've learned how to use my cuttlebug on flattened out SODA CANS*** (!!!!!) and i'd've cut the crown and wings out of silvery paper rather than real METAL and thus they would have only a fraction of their coolness! 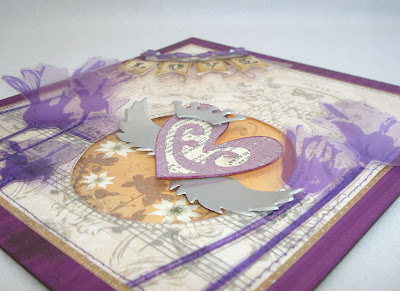 sorry to keep giving you these oddly tilted shots, but it's the only way i can ever capture the dimensionality of things; and since i spend nearly as long deciding how to make each element stand out from the rest while still working together as a whole, i really like to show that! here you can see that i've concealed tiny bits of foam tape aound the inside of the opening of oval window, so that it stands slightly away from the background...but i've sewn the edges of the paper flat against the mat. the wings & crown are each on their own layer of foam tape...the heart is on TWO layers. the banners are similarly raised. the hand-cut transparency flowers have their stems machine-sewn flat to the page...but their blossoms have been left un-attached, and i've bent them up a bit for extra "oomph".

and thus i conclude this post with a hearty
♥ HAPPY BIRTHDAY ♥
wish to the young lady in question!

**with the occasional exception of a PE bag...but that may be more of a political protest than a lack of organization...a stance i support wholeheartedly!