gina's newest digi-kit i mean. or rather i should say gina's *UPCOMING* digi-kit, since technically it's not out yet, but i got special dispensation to give you a little sneak peek! 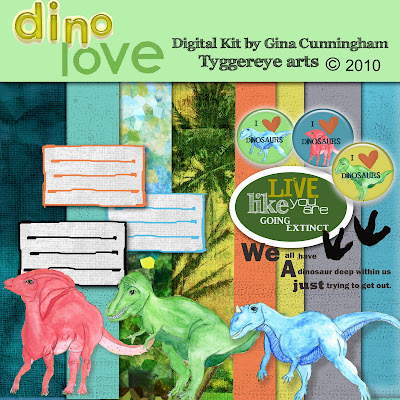 how fun are those dinosaurs??! not to mention the word art, plus there are TWO alphas & some really cool journaling blocks. but even if you don't like ANY of that... (which frankly seems impossible to me, but let's pretend, ok?!) ...even if you don't like any of that, this kit is worth having JUST for the papers! there are a couple of totally awesome patterns, but as a matter of fact, my faves are those amazingly vivid solids! they have just enough grungy "texture" to be interesting, without overwhelming whatever they are paired with. i absolutely ♥LOVE♥ them, and i hope you do, too... 'cause i think you're gonna be seeing them a lot!

as generally happens when gina is nice enough to let me preview a kit, i just could not wait to play with it, so i used diana's current sketch from sketchy thursdays which looks like this... 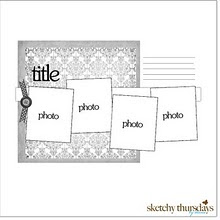 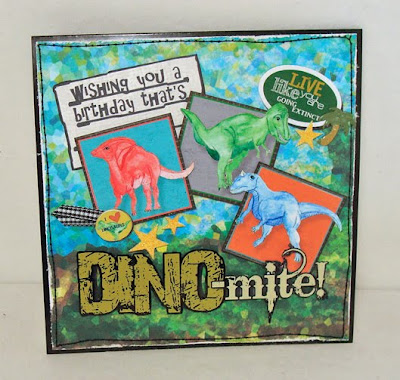 (all images from the "dino love" kit, gina cunningham, tyggereye art; additional supplies: ranger glossy black cardstock; kodak premium photo paper; white matte cardstock from staples; foam stickers & ribbon from michaels; palm tree brad from oriental trading co; fonts--3 the hard way, 3 hour tour & bleeding cowboys--all downloaded free from dafont.com; sewing machine, paper distresser, colorbox & ranger inks)
how fun is that for a little boy's birthday? or for a dino-loving little girl's birthday? or perhaps for a brother-in-law who's just a teeny bit older than me, but i like to give him a really hard time about it??! ;)

this kit will debut in gina's etsy shop soon, so keep your eyes peeled on the tyggereye art blog!
Posted by lauren bergold at 7:28 AM