case in point: here is a project of which i am VERY proud indeed, and it contains approximately $2 worth of materials*!

but first, i should say that the entire inspiration for this came from darling stef, who saw that the gothic arches challenge blog's current theme is BOLLYWOOD, and knew i would want to play! i spent most of sunday afternoon working on my collage, and frankly, it was going nowhere fast. in frustration, i decided to leave it alone, and go out for my exercise walk. while i was walking, i found an 8x10" piece of scuffed and broken 1/4" lucite by the side of the road, so OF COURSE i picked it up and OF COURSE it was the thing that made the whole collage work!!! :)

i know it sounds crazy, but see, part of what i was trying rather unsuccessfully to do was to layer magazine images copied onto transparency over other magazine images...and everything was sort of mushing together a little too much. the layer of lucite in between was just enough to give a bit of depth while still showing both images at the same time.

ok, so do you want to see the collage, then? 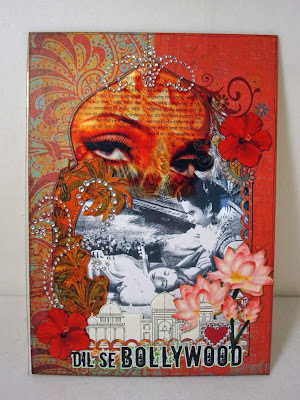 i hope my "arch" is prominent enough! i used one of the very cool templates provided on the gothic arches blog (donna's, i believe) enlarged to about 150% and then cut out of patterned paper so that only the FRAME of the arch remained. as usual, i got a bit carried away with my embellishing, so there is less of the outline left than i had intended!

i realize you can't really see that the whole collage is built on my piece of found lucite, so here's a better shot of the foundation: 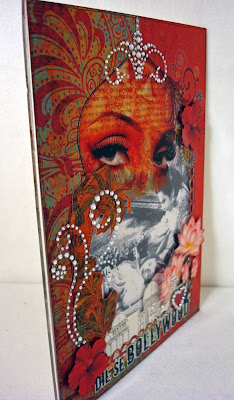 here is a closeup that gives a better idea of how the lucite spacer helped to separate the layers. i glued my "base" (the b&w scene of lovers from a bollywood film, some hindi text from a magazine, and a few mehndi designs) to a scrap of cardstock which is attached UNDER the lucite; i glued the "middle layer" (that gorgeous transparency copy of aishwaria rai's eye's, an illustration of palm trees from a mughal manuscript & an architectural diagram from an indian travel guide) ON TOP of the lucite, but under the patterned paper arch, and then the embellishments are layered OVER the arch, and in some places, spilling onto the lucite! 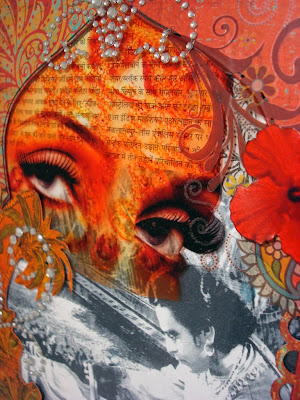 i really like how this turned out and i offer my thanks to the folks at the gothic arches challenge blog for devising such a cool theme, and also to miss stephanie for pointing it out to me! ♥

***************
*the "store-bought" materials, which all came from my stash, include 1/2 a piece of bo-bunny "gypsy" patterned paper; 1/2 a pack of michael's rhinestone flourishes; a couple of anahata katkin glossy cardstock clipart images; and 1/10th of a set of k&co "wild saffron" rub-ons. the rest of the collage consists of magazine and book images, and copies of other images made with my inkjet printer onto kodak photo paper, 3m inkjet transparency or plain paper, depending on the texture i was going for. i used a martha stewart border punch for the cool lattice look at the bottom and sides, and a combination of gluestick, adhesive runner & foam tape to attach the images. the found piece of lucite was trimmed to size by lovely husband jeff using a glass-cutting tool.
Posted by lauren bergold at 8:12 AM

Email ThisBlogThis!Share to TwitterShare to FacebookShare to Pinterest
Labels: collage, more challenges, papercrafting (but not cards)