...but equally
sketch-fest-y!!!
(yes, yes, i know, titles are not my strong suit at the moment.
IOU some snappy nomenclature next week, for sure!)
nonetheless today IS equally sketchfesty...and to prove it, here's another massively cool heidi van laar scheme from which we can make our next lot of fabulous cards:

one of the things i liked about working with the wonderful studio calico add-on kit, "director's cut" is that it gave me a chance to try out supplies i would probably *not* have chosen on my own. these little yellow bicycle journaling cards, for instance, are VERY cool...but if they hadn't just ARRIVED in the kit, i don't think i'd've sought them out. which would've been a shame, really, because i like the result of grouping them together! 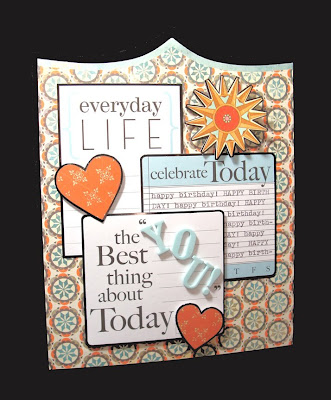 you can see i've used super-duper-thin black mats on *everything* again...i apologize if you're getting sick of them, but having stumbled upon this technique when i made the cupcake gift-set for jeff's mom recently, i just love how it sets multiple layers apart from each other while having a cleaner look than inking or outlining. the sunburst medallion is cut from one of the pieces of making memories' "great escape" patterned paper that came in the kit, the hearts were more chipboard pieces i traced onto patterned paper, and i used part of the shaped bit of the diecut background paper as a sort of pediment at the top of my card. a few minutes with the manual typewriter and a couple of aqua thickers later, i had a sort of fun & funky "guy" birthday card to replenish my stocks.

i hope you are enjoying sketchfest as much as we CAARDVARKS are! it certainly seems as if people are having fun, we've had RECORD numbers of cards so far, which is *AWESOME* if a bit daunting!!! back tomorrow with more sketchy goodness!
Posted by lauren bergold at 3:00 AM