ok, remember that "five addictions" poll thingie from the other day? can we stretch it to six, in my case?* thanks. 'cause i think i'm gonna need to add amigurumi. particularly amigurumi food; which is perhaps the only thing on the planet cuter than amigurumi animals! 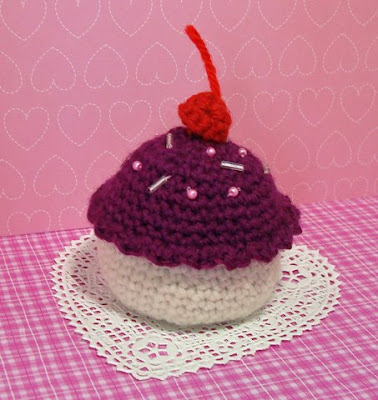 i found the pattern for this cupcake on nimoe's blog, where there is also a very good tutorial to accompany it. her version has the cute cartoony face sported by most amigurumis. in future versions** i will no doubt assay this, but this time i've opted for decorative sprinkles instead, fearing that the highly mature first grader and supreme court justice*** niece riley, who will be seven on saturday, might find such frivolity beneath her dignity. in these weighty matters, an aunt cannot be too careful! :)

*i could maybe borrow one of leslie's...she only has three, the poor dear sad healthy darling! :)

**and there will be future versions. oh yeah. count on it.

***strictly speaking, riley elizabeth is not yet an incumbent of this lofty office, but she is already practicing a suitably decorous demeanor, just to be safe.
Posted by lauren bergold at 1:31 PM

Email ThisBlogThis!Share to TwitterShare to FacebookShare to Pinterest
Labels: amigurumi, non-paper crafts, things made of yarn