do you love the title of this week's challenge at shopping our stash? i do... altho i confess that every time i read it, i get the jackson five's infectious 1970's single, "dancin' machine" stuck in my head for all eternity. so i apologize if i just got it stuck in your head, too. but what's the brief this week? we want you to use one of the many "craftin' machines" we all love so much: diecutter (mechanical or electronic), sewing machine, xyron, etc; to make your creation. oh, and be sure to tell us what you used if it isn't obvious, k? i used my xyron, and in fact, i cannot imagine having attempted this project without it. but first let me show you what i made:


if you saw this index card last week you'll know that i was already playing around with this idea on a much smaller scale. today's card is an upgraded, slightly fancier version of the same chevron or herringbone effect on the index card, though this time i've used patterned paper scraps in shades of tan and brown for a more coordinated look. but before i even started thinking about the design, i made the most important part, which was the base. i ran a 5 x 7" piece of plain white cardstock through my xyron machine, which put a thin, dry layer of adhesive from edge to edge. then i cracked the paper backing so i'd be able to easily remove it, and trimmed the panel down to 4.75 x 6.75". this is a little trick i learned a few years ago, to apply the adhesive FIRST and then trim down your paper, otherwise there is always a little bit of stickiness around the edges of the paper, which i don't like. ok, so i have a panel of cardstock that's the right size and sticky. now what? 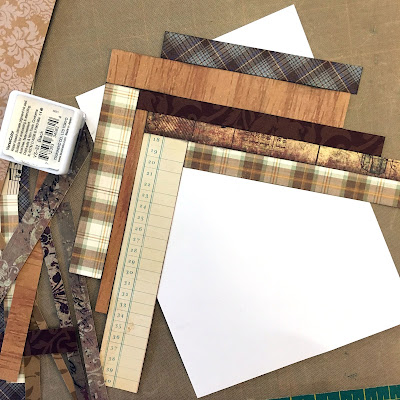 this is when you start creating the pattern. if you want a true herringbone, you need to cut all of your paper scraps to exactly the same width and length, and start at the center of your paper. i was going for a slightly more casual look, which coincidentally required A LOT less measuring, lol, so i just cut my strips to random widths. the one crucial factor is to make sure they're all cut quite straight, and that the short edges at top and bottom are perpendicular to the length of the strip. if they aren't, you'll have little gaps of background paper that show through. i used my guillotine chopper to get nice straight, square cuts, and i was good to go. i placed one strip at a diagonal towards the left side of my paper. then i placed a second strip at right angles to the first. then i just alternated back and forth until my entire panel was covered in strips. 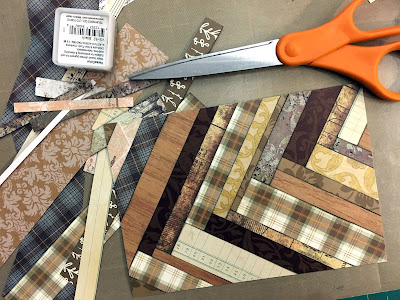 then i used the handy guillotine once more to neatly trim off all the excess at the edges. finally, i made a very simple sentiment panel. i had actually intended to add a second "craftin' machine" into the mix here by using my sizzix to diecut a fancy label shape, but i honestly felt like it overpowered the design of the herringbones, so i wound up just affixing my natural wood letters to a strip of patterned paper and matting with the same deep brown as my folded A7 card. 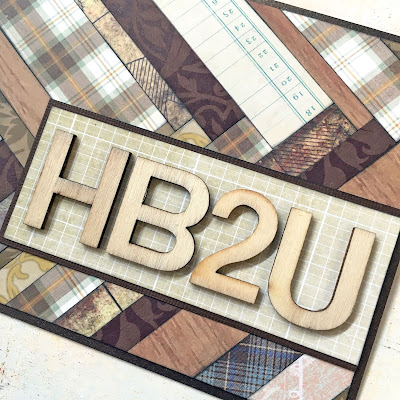 there's lots more inspiration from those amazing "craftin' machines" known as the SOS design team. why not check out the lovely creations they've made just for you! ♥
Posted by lauren bergold at 6:30 AM