...we've got a color challenge this week at shopping our stash, and it's a beautifully BOLD one at that, see: 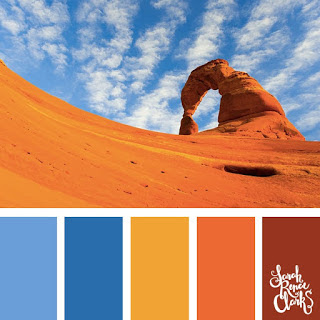 as soon as i saw these colors together they reminded me of a bunch of ancient diecut cardstock flowers from an MME collection yeaaaaaaaaaaaaars ago, the remains of which i found recently and had put on the "crafty garage sale" pile because i felt like i had pretty much outgrown them. but they really did have every single one of the colors, and since the point of our challenge is to find those really old items and figure out a way to USE THEM, i felt i had a moral duty, lol. 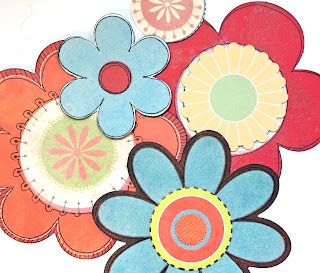 my biggest problems were that the flowers were a bit too big, for one thing --made more for scrapbooking than cards, probably-- and also a bit bland. but essentially, i still kind of *liked* them or they'd've been in the "get rid" pile much earlier. as i was considering what to do with them, it occured to me that they had shapes that were not entirely unlike mandalas. so i solved the size problem by placing the larger ones out at the edges of my A7 cardfront, and the blandness problem by adding some doodles. i also adapted them a bit more by combining centers from one flower with petals from another and stacking a few layers together for a bit of height variation. and here's what i came up with:

do i even have to mention that the rest of the flowers have come off the garage sale pile and have been reunited with the rest of the embellishments?! meanwhile there's plenty more color palette inspiration awaiting you at SOS... why not hop over and enjoy some of that right now, darlings?! ♥