ok, technically, this week's challenge at shopping our stash is called, "baubles, buttons and bows" and we want to see-- ok, frankly, you should already have guessed this-- baubles and/or buttons and/or bows. i went with baubles. which is not that unusual for me. i mean, we all know that if i were a bird, i'd be a magpie; but in this case it really was absolutely necessary, because i was making the cover of a souvenir birthday book, for my friend barb, who will be celebrating her *60th birthday* next weekend, in las vegas!


i know, i know, technically, what happens in vegas stays in vegas, and it's important to destroy the more incriminating photos. but i figure there will be at least some wholesome moments, involving cake and presents and her kids, which she might like to print out and put in a really cool book full of vintage papers, fun patterns and festive transparencies, so i've got her covered!!! :)

i realize it's sometimes hard to figure out what i've done, exactly, when i alter things, so luckily for once i actually remembered to take a picture of my embellishments before i started: 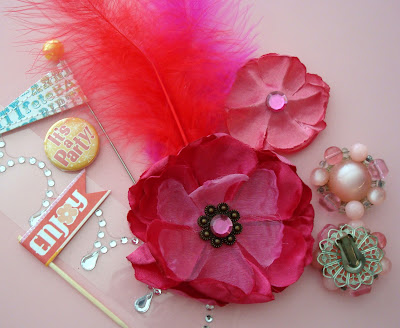 you can see that my two store-bought florals already had gem centers, but they were A) kind of  dinky and B) not at all birthday-related, so i decided to swap out. i used a badge for the smaller one, and a really cool vintage earring (aka BAUBLE!) i found at a rummage sale for the other. it had a clip on the back, as you can see, so i used pliers to pry it apart and then wire cutters to trim it up. under ordinary circumstances, i would've handed this job off to jeff, but recently he found me a pair of excellent spring-loaded cutters at home depot, which make snipping through fairly strong metal about the same effort as cutting paper, even with my weak carpals, so i was able to do it on my own. here's what i had afterwards: 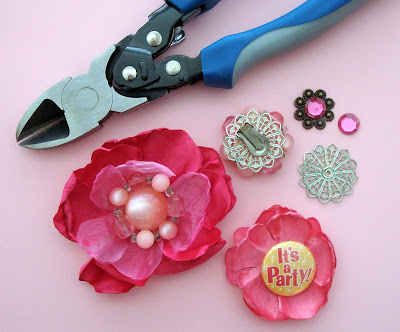 and yes, i am a bit psyched that i still have one whole earring and that cool silver filigree backing thingie to use on a future bling-encrusted project! :) 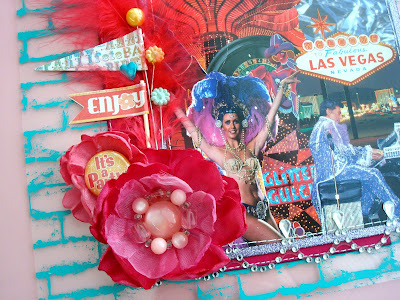 i was hoping to show the entire book today, but i'm still tinkering a bit with the finishing touches on the pages; plus... this is already a pretty long post, isn't it? so rather than rush, i've elected to come back later in the week with the dramatic conclusion! :) meanwhile, there are loads of fabulously inspiring "baubles, buttons and bows" projects at SOS; why not hop over and enjoy those right now?
Posted by lauren bergold at 6:30 AM

Email ThisBlogThis!Share to TwitterShare to FacebookShare to Pinterest
Labels: minibooks, papercrafting (but not cards), shopping our stash