wrapping up the summer giftwrap wrap-up

i really like wrapping presents. i may have mentioned this before. a few times, actually. but i keep on liking it, so i guess i'll keep on saying so. and occasionally posting photos of stuff i've wrapped. like now! 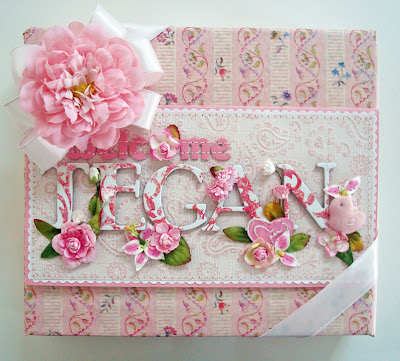 people often ask how i mail my over-sized, lumpy-bumpy cards. well, the baby gift above is one of my answers: you don't always NEED an envelope!

below is another example of the same thing, you can KINDA see the card, and it's decorating the parcel, but there's still an element of surprise when you undo the ribbon. (in this case the "wrap" is an old sewing pattern.) 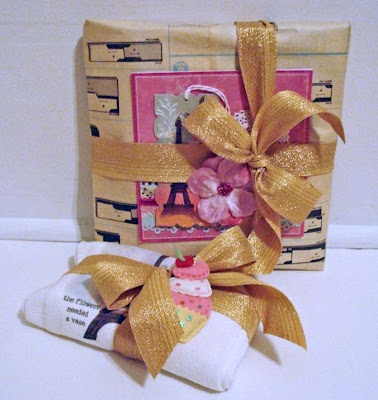 don't get me wrong, i looooove commercial gift wrap, but i like to play around with other options, too. above you can see a pretty tea towel that was part of the gift, which i've used to enfold another little present.

maps are great, too; and the illustrations from oversized, falling-apart books can be rescued and used to make a one of a kind envelope, like the one in this picture: 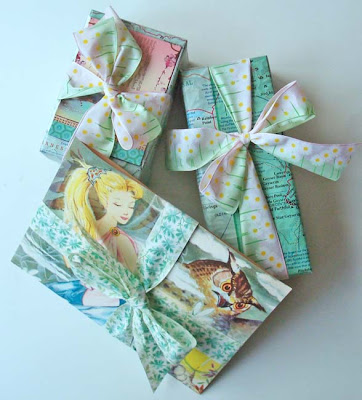 (speaking of pictures, i realize mine are particularly dreadful this time; mostly i'm snapping these on my phone late at night!)

ok, so maps... sometimes they're a bit plain, in which case, i'm pretty sure they WANT YOU TO stamp and color on top of them!!! :) and heck, adding some vintage lace and maybe a crocheted flower couldn't possibly hurt, could it?! nahhhhhh! 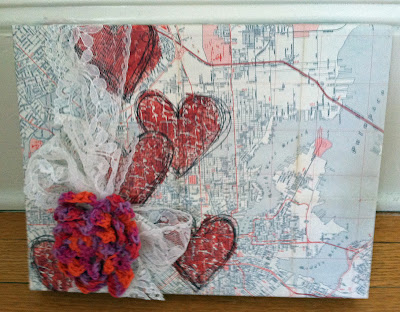 here's an idea for dressing up candy bars. why would you want to? well, i dunno about you, but i give cash or a check pretty often, and you have to put those *SOMEWHERE*. these little sleeves were made from cutting down the envelopes from a couple of old sewing patterns. i tucked the money inside, and tied on a pretty bow. easy-peasy! 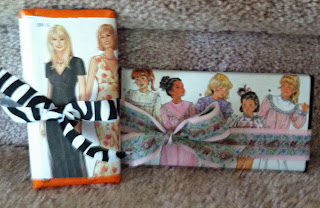 ok, one more map idea: how about using it to wrap a tube? in this case, it's a sleeve of chocolate biscuits, but this would work for a bottle, or tennis balls, or even a fancy scroll entitling the bearer to free baby-sitting or a pedicure! again, there's no reason you have to use the map as is; the queen and prince philip came from my "cut out" folder (but diecuts or stickers work just as well...let's face it, we all have TONS of supplies, right?!) i used an off-cut of the map plus a few alphas on the envelope. 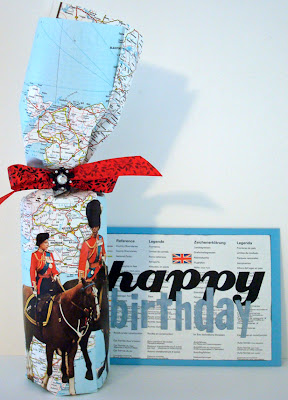 here's my favorite gift in this post, and it's got a really funny story attached: my aunt brought me this beautiful orchid as a housewarming present, and of course i was wowed by the fact that the bag matches it PERFECTLY... and i said so. at which point she, my uncle, and my cousin nearly fell over with laughter. can you guess why??! 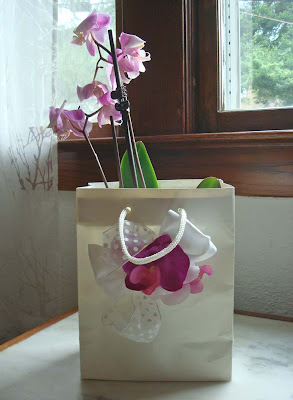 yep! apparently *I* made that bag, like three years ago, and put a gift for them in it!!! it was too nice to throw away, they said; thus it got saved.  so it seems like the really pretty presents... sometimes... THEY COME BACK!!! ♥
Posted by lauren bergold at 12:00 AM