today at ♥JINGLE BELLES♥ we're thrilled to have my amazing colleague from shopping our stash, jessi fogan, as our lovely guest star. for this fortnight's prompt she came up with, "sleigh belles ring" and of course, always mad for a fab title, we jumped on it! we debated for a bit whether the brief should be, "make a card with a sleigh on it" or, "make a card with bells on"...  the latter encompassing either the real jingly kind, or just the image of a bell. finally we decided we'd allow *either* (or both?!) of these ideas... and for anyone who finds those too challenging, we threw a further possibility, "make a card using sheet music". so basically, if you cannot find SOMETHING you like in this one, you're just not trying! :)

being ever the show-off, i used two of the three elements. ta-daaaaaaa:

so you can see the sheet music, obviously. i had planned on using some softly patina-ed vintage music, but when i was looking through my leftovers file, i found this digital copy, and the green and white sort of caught my eye. because of the layering, it might be a little hard to see my (glittery, diecut) jingle bells, so here's a closer shot of those, they are nestled in the border that stretches across the card; and yes, they are slightly less prominent than i had originally envisaged, but i think i'm starting to kind of like the subtlety of that: 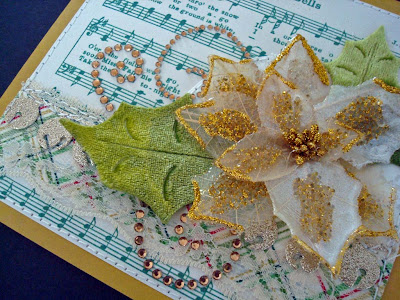 something i think *you* will like, is hopping over to ♥JINGLE BELLES♥ to see both jessi's and stephanie's cards. be sure to leave them a little love while you're there, won't you? oh yes, and i seem to recall something about there being a prize on offer... hmmmmm... well, i suppose while you're there you might as well check that out, too, eh, darlings?! :) :) :)

ps: i'm linking up with 52-card-pick-up, and the merry monday "anything goes xmas" challenge ...which lasts throughout july!
Posted by lauren bergold at 12:00 AM