it's not even a week!

since i posted the last batch of index card a day goodness... go, me! 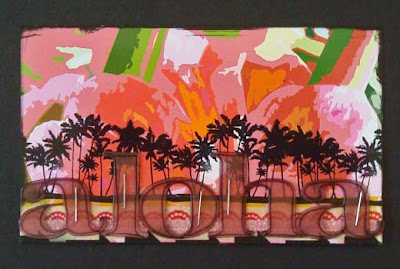 039: aloha
it's been 18 months since we went to hawaii, but we still talk about it all the time, and some of us (ok, mostly ME, lol) make little random bits of art. the palm tree stamp is hawaiian, given to me by my friend barb, years ago. the base of the card was this mega-photoshopped pic i took of orchids at the foster botanical garden in honolulu. i thought it looked kind of sunset-y! 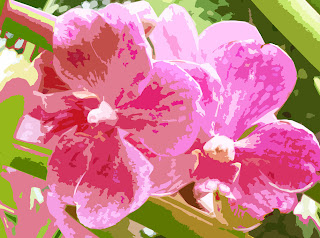 since it was pretty large (printed for something else, then not used) i had a leftover chunk of photo, which i used as base for the next card, the following night. but i wound up with so many layers on that one, you really don't see what it is. which is ok. 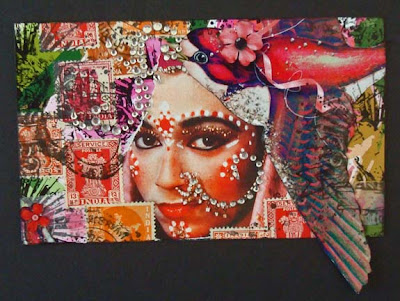 040: bhangra babe
again the combination of postage and rubber stamps, which for some reason i really like right now. the bird is from a digital kit, which i had also printed out ages ago, and i'd even fussy cut it, too.

which brings me to a question: am i the only one who has MASSES of leftover bits and pieces?! i mean, specifically... patterned paper scraps, off-cuts of vintage book pages, digi-files printed (on photo paper or sticker paper or a transparency) but not used, illustrations or stamped images i've cut out but abandoned, etc etc. i'm not complaining, mind you; i consider all the "extra" stuff a head start for the next project, and i just file them away, like with like. in fact, said files were the first thing i grabbed when i knew i was going to be locked out of my art lair during the great floor-refinishing caper. i limited myself to ONE packing box of paper, and this is it: 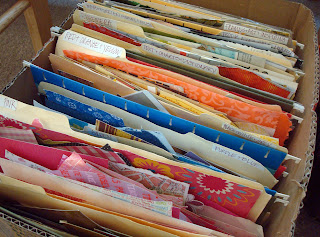 at the front are patterned paper scraps, sorted by color. further back is "the good stuff"; ok, heck, it's ALL good stuff, actually, i never met a piece of paper i didn't love, and that's the truth! :) but at the back of this box are more obscure things, like vintage paper and tags and magazine pages and... well EVERYTHING! these i group thematically, so that if i want some foreign text, or a bit of map, they're all together and i can just flip through them: 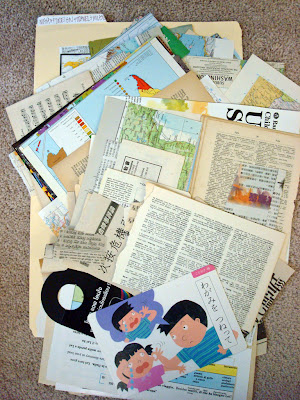 i also have a big file of "ready to use" stuff; mostly things that have been fussy-cut in advance. sometimes because i thought they might be right for a project, but then changed my mind... (i do A LOT of experimentation in the "lay out phase"; i dry fit everything and move it around for ages until something starts to gel) ...or sometimes, at the end of the night, when i'm too tired to be creative, but not tired enough to go to sleep, i'll just pick an image or two and trim them. they used to be in files, as well, but the tiny bits would fall out or tear, so now they're in envelopes: 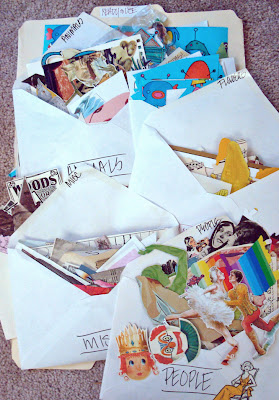 back to ICAD, but this next card does illustrate how my storage method works for me. i wanted to make an all-pink collage, so i grabbed the pink scraps folder and rummaged a bit: 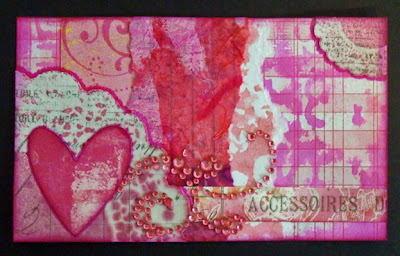 041: magenta
being spoilt for choice in terms of pink scraps, i narrowed down to ones that were inky essperiments, or offcuts. then i played with them a bit, but part of the ICAD exercise for me is not-- as is my usual tendency-- to over, over, OVER-think everything. so i tend to glue a lot faster, and dry-fit less. which i did. and yeah, the diecut heart was just there in the folder, too. no idea why, but i used it. 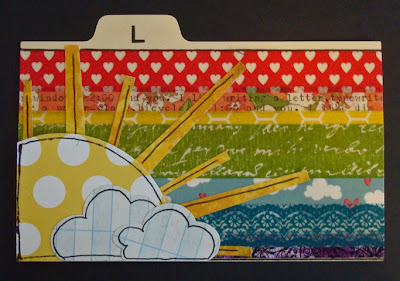 042: washi rainbow
one of the suggested ICAD weekly themes (in the first week i think?) was rainbows. i haven't been following the themes very vigorously this year, but that one stuck in my head and i keep coming back to it. when i was thinking about something new and fun i could do with my somewhat (AHEM) "plentiful" collection of tape, it came back yet again. i would not rule out seeing another version of this, for that matter.

wow, for a post with only four index cards in it, this thing is LONG! sorry about that, i guess the extra time being locked in the guestroom is sort of a mixed blessing, eh? not to worry, the floors will be finished eventually and i'll be back to neglecting you again soon, darlings! :) :) :)
Posted by lauren bergold at 12:00 AM