i made the cover of *CLAMOUR* magazine!

no, i did not spell that wrong. and no, i'm not ON the cover of a magazine; i literally MADE (a pretend) one! it was one of tammy's brilliant daily paper prompts from the daisy yellow art blog. see? 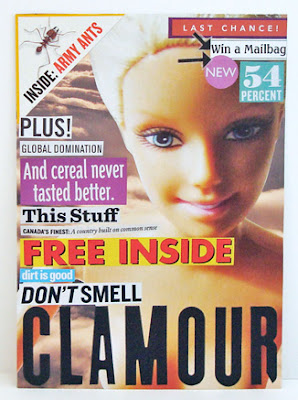 DPP#49: vogue (sort of)
you should really click the link for this prompt and see the astonishingly lovely faux magazine cover tammy drew and hand-lettered, because it is absolutely magnificent! i'm not capable of anything similar; but on the other hand i am pretty good at collage, and have loads of fun things i've saved from real magazines, so i had a blast cobbling them together into one hilarious (to me!) pastiche. do i even have to tell you my favorite part is the "army ants" banner??! i clipped that, gigglingly, from the cover of a national geographic AT LEAST two years ago and have been saving for "just the right thing". which, clearly, was *THIS*!!! 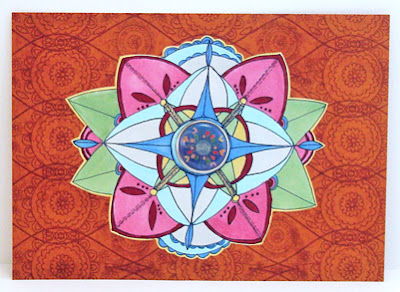 DPP#50: coloring book (1 of 2)
tammy garcia of daisy yellow drew several lovely line art mandalas (to which she would like to assert her copyright) for this prompt, i printed my fave, colored it with markers, cut it out, and added a few bits and bobs to round out the page. 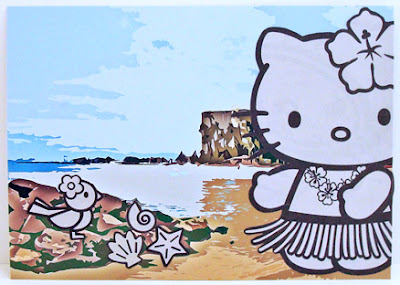 DPP#51: coloring book (2 of 2)
for the second coloring book prompt i grabbed a fab hello kitty activity book that the amazing miss stephanie gave me for my birthday one year (which i LOVE!!) and combined some bits trimmed from a hawaiian-themed page with one of my own photos of waikiki beach on which i've used PSE's  "cutout" filter... plus a few more digitricks. the result makes me grin like a loon! 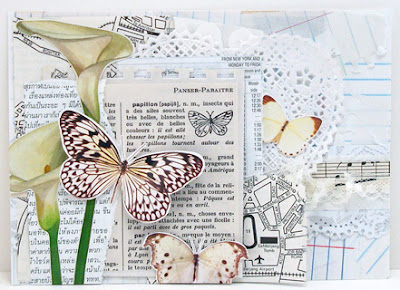 DPP#52: white page
i believe i've mentioned before that my favorite aunt's favorite color is *WHITE*! so over the years, i've made a bit of a point of "practicing" and "trying to" combine as much of that color-- or rather, i suppose, strictly speaking, that absence of color-- together as possible. ironically, the one time i feel i have really REALLY nailed it... is NOW... making a journal page that would never be used for anything. there's a lesson there, i tell ya! (this may be the only thing i've made for DPP that doesn't make it into the journal; b/c i'm thinking i might sew it to a card base, actually, and save it for aj's birthday!!!) :) :) :) 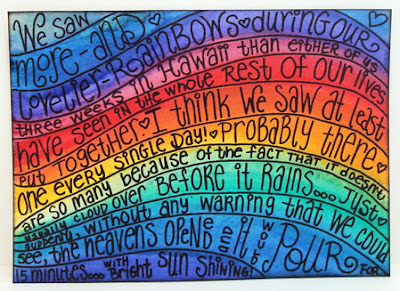 DPP#53: write
for this one i cheated a teeny bit, but in a GOOD way, lol! i've been craving a second shot at tammy's brilliant "slow journaling" idea (my first attempt met with in technical difficulties due to  infamiliarity with water soluble wax crayons); so i took it here! this time i've done the rainbow in watercolors (great practice mixing colors!) and thus had no trouble writing on top with a copic multi-liner. i did actually do some "proper journaling" instead of using a quote; i wrote-- appropriately enough-- about the rainbows in hawaii! ♥

i'm fairly proud of the fact that i managed to keep up with ICAD during june and july and with DPP until just recently*, but i am just the teeniest bit behind at the moment, so please bear with me; i'm still hoping to finish with the group on sunday or monday!!!

*did i mention september is NUTS in both jeff familiy and mine? between our two sides there are 7 birthdays and our own wedding anniversary in the space of about 3 weeks! sometimes i feel like the "holiday rush" starts on labor day weekend around here, because it honestly will not be totally calm and with "weekend breathing space" until january now! but, you know, in a GOOD WAY!!! ♥♥♥
Posted by lauren bergold at 9:00 AM