i mention that in case the first of my latest round of daily paper prompt journal pages, inspired by the daisy yellow art blog, was somehow obscure to you? nahhhhhh, surely not! :) 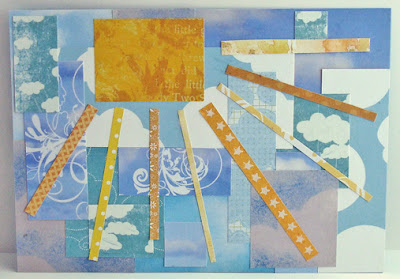 DPP#38: music with marit barentsen
for this prompt the very cool and very talented marit invited us to make a page inspired by a favorite song or artist. for some reason the first thing that popped into my head was an oldie but goodie (i'm not sure i'd call it a fave, though i do quite like it!) "mr. blue sky" by electric light orchestra. i had planned to make a more traditional sunburst, but at some point it turned into a layering of all right-angled shapes; i had also planned to put the lyrics (or at least the chorus) on here somewhere... but in the end this piece sort of just declared itself *DONE* and refused my efforts to add anything else, so i stopped. :) 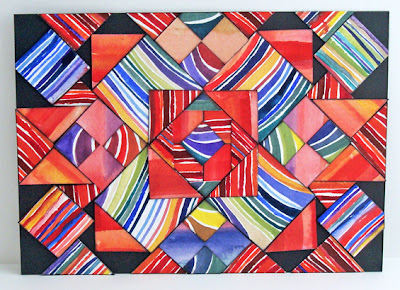 DPP#39: practice painting lines
in a reverse of the above, for this prompt, which was meant to be incredibly simple, i just could not stop playing around! i painted my lines on the off-cuts of watercolor paper i save to do brush and paint-color testing. i painted fat ones and thin ones, curvy ones and straight ones, dark ones and light ones; i practiced mixing different shades; then at the end i took all my strips, cut them into squares and/or triangles, and made a mosiac. why? i have NO IDEA... but it was fun and weirdly soothing! 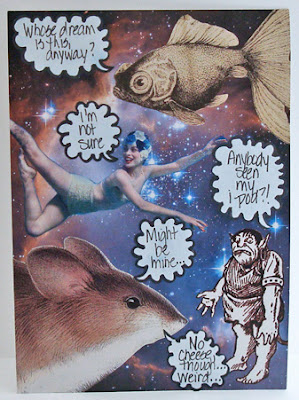 DPP40: thought bubbles with hannah
this was a fun one! just a straight up collage, where each "character" has something (weird and laureny!) to say. 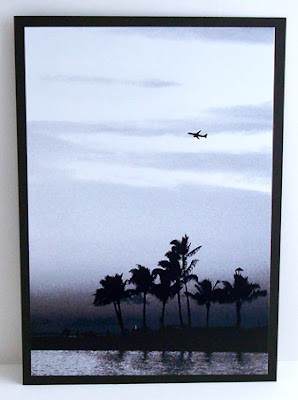 DPP41: draw a silhouette
ok, yeah, i totally cheated. i did actually take some silhoutte "still life" photos of the shadows cast by various objects and ornaments in my home, and i'd planned to use one even though none of them were (to me) particularly interesting. but then, while i was looking for the hibiscus photo below, i found this picture (which i LOVE) snapped last october on waikiki beach at sunset, and it was practically a silhouette anyway, so i converted it to black and white, played around with it in PSE, printed it, and called it done. 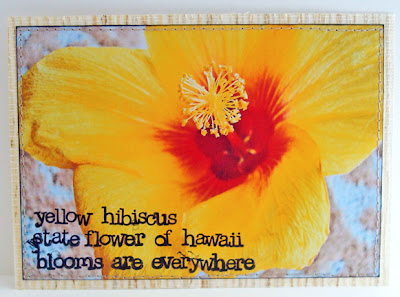 DPP#42: haiku
i'm pretty sure i've only written one other haiku in my entire life and that was in the third grade. i was stumped for the entire day, and had begun to try to think of "another way to go" on this prompt, when, right before bedtime, this whole entire thing popped into my head fully formed (including the stamping on the photo and the bamboo mat) so i just ran with it!

speaking of running, i have to, right now! ciao darlings! ♥♥♥
Posted by lauren bergold at 4:00 PM