(not) the end of daily paper prompts...

...because the irrepressibly inspiring miss tammy has decided to keep going throughout the entire month of september!!! which means, if you've been playing along during august you can keep going; or if you never quiiiiiite got to it, you can start now and still have 30 gorgeous new pages by this time next month! why not hop over to the daisy yellow art blog and give tammy a bit of a "WOOHOO" if you have a couple of minutes, and check out what she has in store for us next.

in the meantime, i've been keeping up with the prompts, but (as ever) not so much with the posting, so here are the last week or so of august pages: 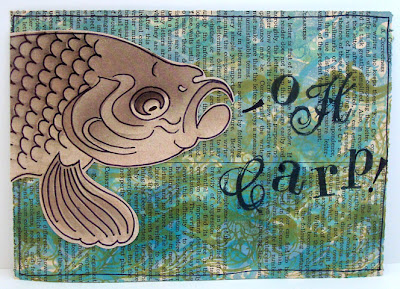 DPP#25: ocean waves (from prompt list)
i used a bunch of different sizes and shapes of swirly stamps to create my waves... but not enough contrast in ink colors, so they don't show nearly as much as i'd like. on the plus side, i outlined a chinese fish from a post card, and added a silly caption, so i kinda like it anyway. :) 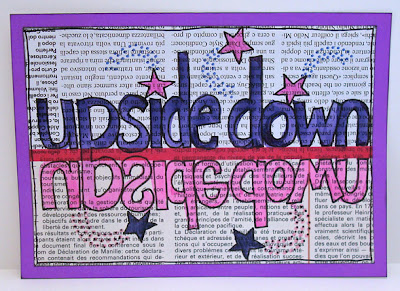 DPP#26: write upside down/mirror image text
my favorite thing about this project is being asked to do things i've not only never done, i've never even thought of doing! so when i read, "write something upside down" i honestly had no idea if i'd be able to or not. it turned out to be easier than i thought (admittedly, i used ordinary text as a mirror, which helped); as a bonus, this amused both myself and lovely husband jeff no end; in fact he chuckles every time he sees it! 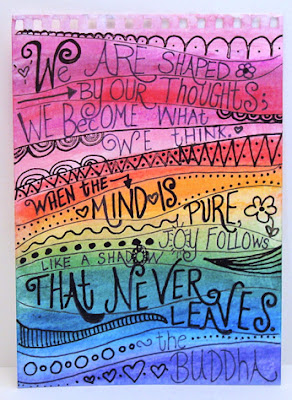 DPP#27: slow journaling
this was verrrrrrrrry slow journaling, indeed, it actually took me two nights, because i used my brand new (inexpensive but cool) water soluble wax crayons FIRST, and then tried to write on top using ordinary pens. i killed the tips of a sharpie and a copic multi-liner before i was even halfway finished my quote; luckily the next day i remembered i had some black jelly roll pens. i like how this looks, but it sort of makes my wrist ache... 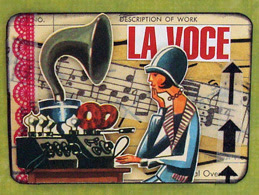 DPP#28: ATC
i haven't made an atc in ages, so this was just totally fun. (i know in this configuration it looks nearly the same size as all my other 5x7 pages, but it's 2.5x3.5" honest!) i used some cool "new" vintage bits from an incredibly fun thrifting expedition in new york with kirsty on monday, i will tell you more about that later! 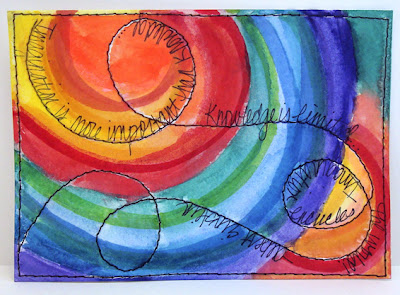 DPP#29: swirly writing
i created my swirl with the sewing machine and then wrote along it in a sharpie and watercolored over it, then at the end i added some swipes with markers to get a bit more color variation in there. i love the bold rainbow effect, but i wish it didn't overpower the einstein quotation quite so much. ah well, live and learn, eh? 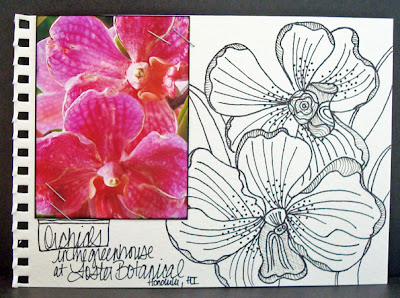 DPP#30: garden sketching
i believe i have drawn more this summer than in the past four or five years combined!!! it's made me realize a couple of things: one being that despite having very little talent in this area, i ENJOY drawing! for another, it's really very *LIMITING* to only be willing to do the things you can do well. who knew?! ♥ 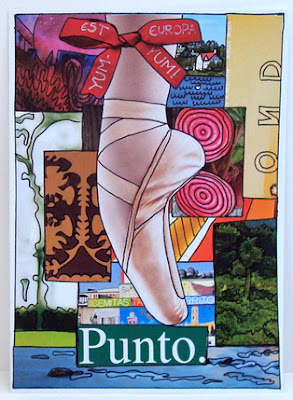 DPP#31: (no prompt)
i thought it would be fun to end the month with a pointedly* pointless collage. so i did. i hand-cut the squares and glued them as i went, added my focal pointe (lol), then outlined everything with a sharpie-- just because, as a newly converted "person who draws" i was feeling especially empowered! :) :) :)

tomorrow i have a little surprise i'm very excited about, so i hope you'll stop back for that. in the meantime, i wish a happy weekend to everyone, and an especially happy (and safe!) 3-day holiday weekend to my american darlings! ♥

*punto means point in italian; these images were cut from a copy of italian vogue i got in monday's great new york thrifting expedition, which i will tell you about soon!
Posted by lauren bergold at 5:00 AM