after two different-- but equally "maximalist"-- passes at amy's gloriously pared down sketch, which i absolutely *LOVED* from last fortnight, we ♥JINGLE BELLES♥ have moved on to prompt #9 for 2012: a little thing we like to call (in honor of this sunday's holiday) PEACE ON EARTH(DAY) in which we are asking you to create a holiday card (or cards?!) which re-use, re-purpose, re-cycle, up-cycle, or in some way "rescue" a bit of... well, SOMETHING... which you'd've either thrown away, or perhaps just overlooked in terms of card-making?

i knew i wanted to punch and re-use an image of the earth i remembered from one of the cards i received last christmas*; i also knew i wanted to re-use the technique i showed earlier this week on the pixie blog, about how to make cool custom die-cut chipboard alphabets from re-cycled cardboard (the "peace" letters below were made out of a 100 calorie pack cookie box!) and vintage paper; i used foreign text to kind of emphasize the "world" aspect. then, when i was choosing papers for the background, i found the green panel, which was actually a bit of the packaging from some florals that i'd saved, and it was the PERFECT size, shape and color, so i managed to work in a third "re-cycled" element, woohoo! 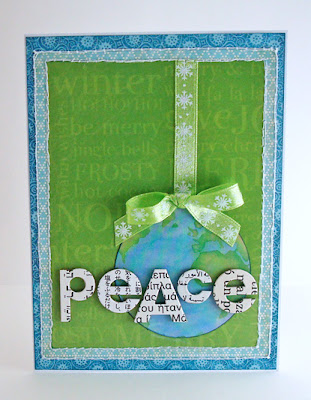 but none of that really answers the MINIMALISM question, does it?! ok, well, see, in the meantime, as i was assembling the bits and bobs i wanted to use on my card, i happened to check in on this week's card-making sketch challenge at two peas, which i discovered about a month ago, it's hosted by kimber mcgray and i've been intending to play along; so imagine my delight as i'm sitting there with a re-cycled card, a re-usable earth and some letters i know will work perfectly on top, and i see THIS: 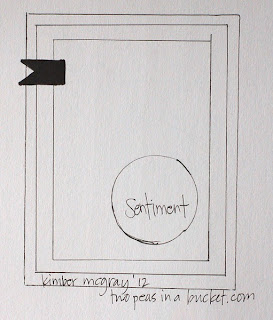 yeah!!! :) which is not to say that i couldn't have done my *usual* thing and added in a lot more bits until the minimalist sketch became a maximalist card... but somehow, mysteriously, this time, i did not! i can only think that miss amy's and miss stephanie's awesome examples took a couple of weeks to "kick in" and now i finally GOT IT!!! (in my great excitement i forgot to attach the little ribbon tab i'd planned to use up at the top left before sewing enthusiastically several times around the perimeter of the card. sorry. that would've been cool!)

here's a closer shot of the letters, which i've popped up on foam tape for a little extra dimension: 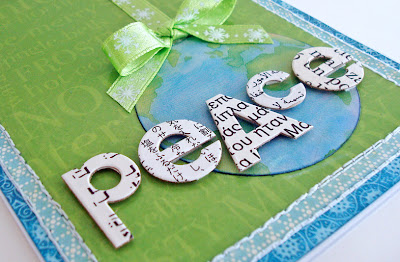 in the spirit of full disclosure i feel i should mention that the bow is a total cheat: i glued the flat bit of ribbon to the card, tied a separate bow, and stuck it on with glue dots. and no, the little "legs" of the bow didn't just happen to fall perfectly like that, either, i (wo)man-handled them into place and then glue-dotted them, as well. because i think its important to show ribbon who's the boss! :)

so now it just remains for me to invite you to sort through your holiday supplies, your treasured scraps, and maybe even your waste paper basket... and come along to celebrate PEACE ON EARTH(DAY) with us between now and wednesday, may 2nd at ♥JINGLE BELLES♥!

*remember, you needn't use an "earth" image or the word "peace" in your creations... the prompt is just about the recycling aspect; the fact that i've done both is sort of coincidental and i hope it's not confusing! ♥


ETA friday morning:  many thanks to the very lovely and uber-talented laurel seabrook for pointing out that this card is a serendipitously perfect fit for her very awesome INSPIRED BY CHALLENGE #20; which is also EARTH DAY related, but in this case involves being "inspired by" (hence the name of the challenge, lol!) this lovely photo. do check out her gorgeous LO and start thinking up what you will do! ♥♥♥ 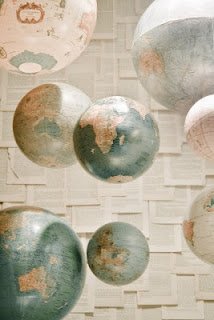