...or french onion dip...but it IS *called* a potato chip scarf... (or a curly-wurly scarf) ...and here it is, being worn by the world's least enthusiastic scarf model* : 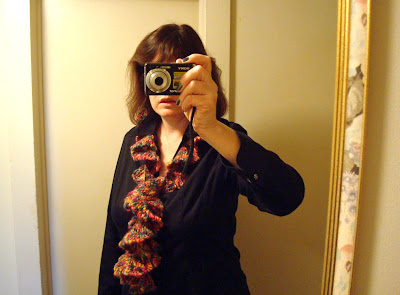 here's a closer shot, in which you can see the detail and shape better, but without seeing it ON someone, it's hard to see the fun drapy ruffly effect! 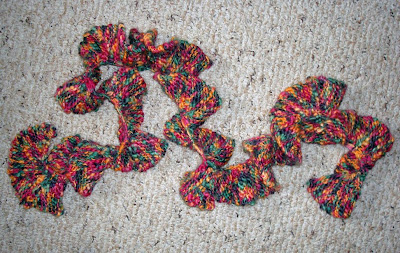 i used this pattern, which involves short rows**, but is a much better way*** to knit a potato chip scarf if you have a limited amount of yarn and are not totally sure when it's going to run out. i had 3 balls of very high end italian thick-n-thin called venezia that i snagged for a song when my favorite local yarn store was closing****. it was luscious to knit, and i know the colors will look amazing on my friend lelia, whose birthday present this is. and now of course i am firmly in the grips of yarn lust...and totally longing to cast-on something else! :)

*no, i actually wasn't homicidally angry when this was taken; so no, i don't know why i'm making that face!!! :)

**short rows are really no big deal to do...i'm not sure why they made me weirdly (& needlessly) nervous in advance; additionally, the pattern i used gave me a link to the best explantation of how to "wrap" a stitch when turning your work that i've ever read, making me even more confident with this technique!

***the more common method is to work a verrrrrrrrrrrrrry long horizonal swatch that *DOUBLES* every other row. the finished product looks almost exactly the same...assuming you have unlimited yarn and don't run out, mid-row!

Posted by lauren bergold at 7:23 AM