here's a little HEART the ART secret: for the last couple of weeks, i've had this page sort of half-made in my head, and i've just been waiting on a prompt for which i could use it! week 44--SMALL THINGS seems like a good fit, so here ya go: 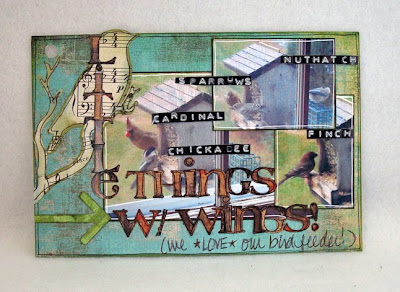 a few years ago, i asked jeff if there was some way of placing a bird feeder near our apartment's (3rd floor) dining room window, so i could really see the birds up close. (there's only one tree near enough to eye level from our windows to work, and it's a weird, leaning, craning view!) he was dubious, to say the least, about whether birds would be willing to come SO CLOSE to us in the house in order to use the inexpensive feeder we bought, which he mounted on a plank by re-purposing some brackets that were designed to hold a window box. he also was slightly puzzled as to why i even wanted such a close-up view of our avian friends. but one of the MANY ways that guy earned the nickname "lovely husband jeff" is by almost always being willing to humor me, and he is absolutely always ready to take on a construction/fix-it project.

flash-forward several years: the plank has been upgraded a couple of times and now features a bigger, two-sided feeder, as well as a holder for the suet blocks that wild birds enjoy in winter, AND extra window-box rails for the "on deck" birds awaiting their turn at the feeder. from october to march we buy birdseed in GIANT sacks which gets dispensed daily out of a large sealed kitchen trash can that lives (cleverly disguised) near the bird-feeding window. and every weekend, an eager bird-watcher can be found in the chair that now resides by that window purposely to hold eager bird-watchers: avidly cataloging new visitors, chuckling at avian antics, and generally making this project the best expenditure EVER in our household.

care to guess *WHO* can be found in that chair most often and longest ??! i'll give you a hint: it's the bergold who is NOT WRITING THIS! :) don't get me wrong, i love the feeder and watch it often, with great delight; it just turns out, i don't watch it MOST often, or with GREATEST delight--that job is reserved for the man of the house! ♥♥♥
Posted by lauren bergold at 6:26 AM