My sister just returned from a week at the Jersey Shore, and thanks to the wonders of technology and social media, I was able to follow along while she and her family had fun at the beach, thus I was properly jealous! Alas, I don't have a seaside trip scheduled any time soon, but luckily I do have Eyelet Outlet Shell Brads and Pearl Swirls, so I was able to make my own little ocean scene, in card form! 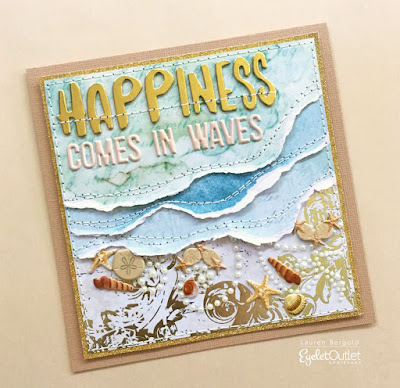 I get cardmaking inspiration from all sorts of places, but it's not very often that a whole entire idea pops into my head fully formed. This was one of those times, though, so I was very excited to get to work. My thought was to make "waves" of torn paper that would overlap a neutral colored beach on which lots of Eyelet Outlet Sea Shore Brads, Shells and Shell Corners had washed up. As I was getting out my supplies, I spotted some white Pearl Swirl Bling and it sort of reminded me of the way seafoam makes little designs on the sand. So I tucked some snippets in and around my shells, starfish and sand dollars. 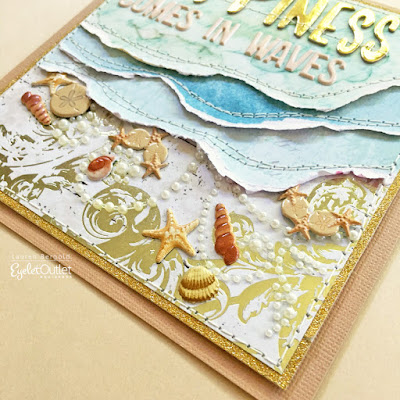 Here's a little behind-the-scenes process that typically doesn't make it into my post, but I've talked about "dry fitting" the elements of a card fairly often, and this pic really shows what I mean. Before I've poked a single hole to set a brad, before I've even touched the adhesive, I lay out every element I'm going to use, in the place I think it should go. And then... (this is vital!) ...I snap a photo with my phone, so I remember where it all went. As you can see, I've trimmed all the papers (which are from various Prima Marketing collections, including Georgia Blues, Misty Rose and Havana) roughly to size for my 6" square card. I've torn the "waves" so they overlap nicely. I've snipped my letters from their backing sheets and arranged them --for size rather than correct spelling lol. Now I am ready to assemble the layers for real! 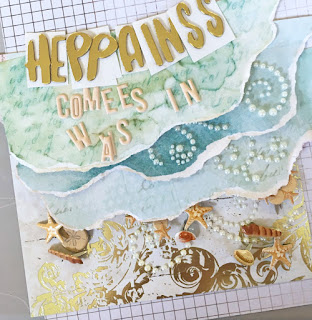 You can see that I did make one or two changes during the assembly process. As I was sticking down the letters I realized that "comes in waves" would fit on one line, rather than two, and I liked it better that way. When I decided to add machine stitching to the layers of waves, I knew the sewing process would be much easier if all the pearls were on the beach. I also decided that a little more sparkle was in order, so I made a mat by adding strips of Glitter Gold Tape to the edges of plain white cardstock cut just 1/4" larger than the central panel. 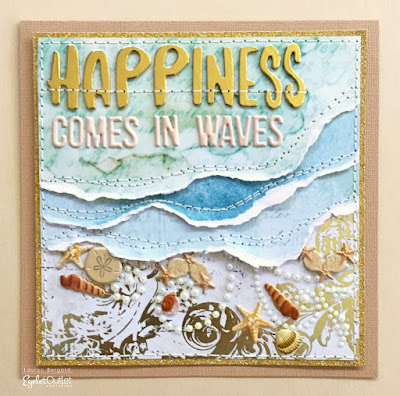 Whether you are headed to the beach, the farm or the zoo this summer, Eyelet Outlet has brads and tape that will work for ANY destination! ♥
Posted by lauren bergold at 3:00 AM