Did She Say, "Steampunk Goggles"?!

Yes. Yes, I did say STEAMPUNK GOGGLES! Because that's what's on the card I made for today, a pair of fanciful goggles surrounded by lots of Eyelet Outlet Gear Brads and Pearl Swirls and... well, lots of other good stuff I'll tell you about in a minute. 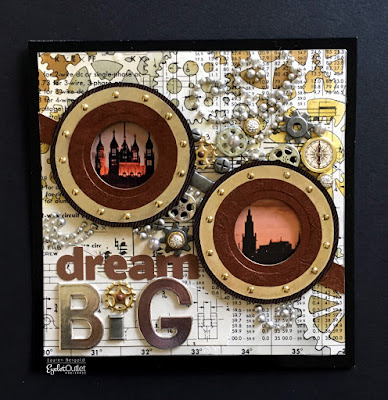 The goggles themselves were actually really easy to make. They're just layers of diecut circles, stacked together. The largest (dark brown) is about 2 5/8", the silver layer is 2 3/8", the copper colored layer is 2" and the die that cut the hole through all of them so we could see Victorian London (via magazine photo, lol) is just over an inch. I think the thing that really "sells" the feeling of steampunk and fantasy is that after I assembled all the layers, I set twelve (12!) tiny 1/16" Mini Round Gold Brads around each lens, to act as the rivets holding the goggles together. I also used a Pipe Brad for the nosepiece and a couple of tiny scraps of copper colored paper at either end to suggest straps. 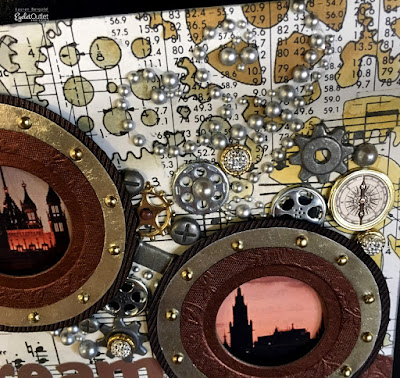 The steampunk goggles I have seen photos of (because apparently YES, this is really A Thing!) all have gears and attachments and things, which I decided to add to the background, instead of the goggles themselves. I stenciled a few gears over some text paper. Then I got to work adding Gear Brads, Screw Brads, Valves from the Pipe Brad set, a Compass Brad, and even a couple of film canisters from the Movie Brads set, because they looked like a different type of cog or wheel to me! Then I added bits of a Pearl Swirl to suggest movement, and filled in with some 8mm Stippled Jewel Brads and loose Pearls. 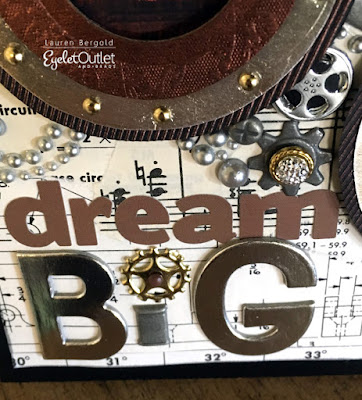 For the sentiment, I used letter stickers in brown cardstock (dream) and silver metallic chipboard. I swapped out the "I" in "big" for a Pipe Brad and a Gear Brad embellished with a Tiny Round Brad from the Brown Mix. 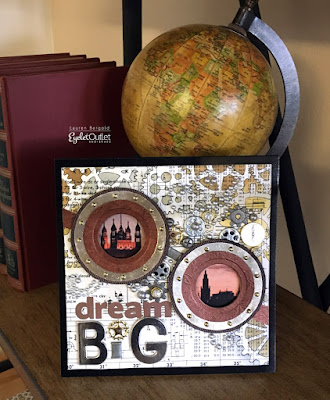 I hope you'll be inspired to dream up your own fanciful creations, because there really is an Eyelet Outlet Brad for EVERYTHING! ♥
Posted by lauren bergold at 3:00 AM