index cards (and a BEAR!) as far as the eye can see!

because, yes, another week of ICAD is over, we are past the halfway point of the 61 day challenge! and YES, i really did see an actual adult black bear, out and about this week; more on that in a minute. 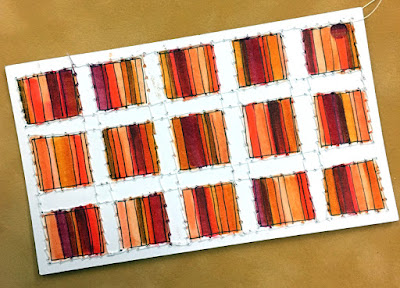 day twenty nine: terracotta
i used some beautiful pieces of semi-see-through terracotta fabric paper to make a collage, to which i then added a grid of machine stitching... that card is below this one. because, in the end, i liked the reverse of the card, with stitched squares, more than the collage itself. so i flipped it over and added some marker stripes. 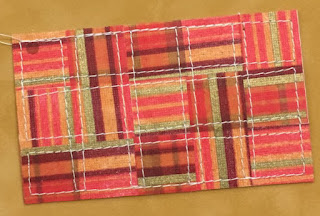 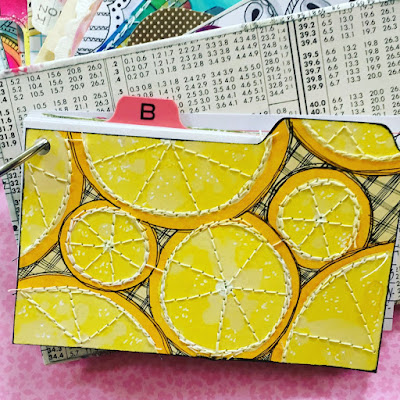 day thirty: lemon or lemonade
this is the simplest idea in the world. i painted some lemon yellow colorburst circles on a nice sturdy tabbed index card. and surrounded them with rings of gamboge. when the card was thoroughly dry i added all the white pithy bits of the lemon with machine stitching. and then i put some pen doodles in the spaces between to make the lemons stand out a little more. 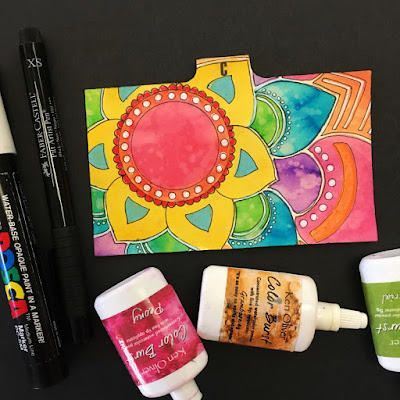 day thirty one: mandala monday
more colorburst, on a different tabbed card. and yes, it was monday, so it's a mandala! 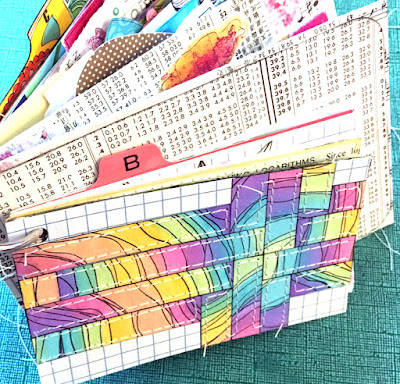 day thirty two: mis-matched
this was an ordinary index card on which i painted my leftover rainbow shades of colorburst from the mandala above. when it was dry i added some pen doodles and then i cut it up and re-arranged the pieces somewhat randomly. as it turned out, they don't actually look very mis-matched. but i still like the card. 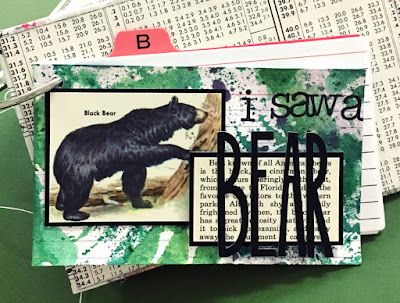 day thirty three: off prompt
...because yes... I SAW A BEAR!!! just before 10am, in roxbury township, new jersey, on my way to work at paper anthology. i had been aware that bears are occasionally seen in the area. or more accurately, that the evidence of bears is occasionally seen in the area. thus, for example, we are very careful with our food trash, etc. but i was still extremely shocked and quite amazingly awed to see a very large, healthy looking, adult bear, just moseying happily along towards a residential neighborhood. which, oddly enough, happened to be called "deer view"; though i'm sure the bear couldn't have known that and been hoping for venison!   ...well... pretty sure, lol. 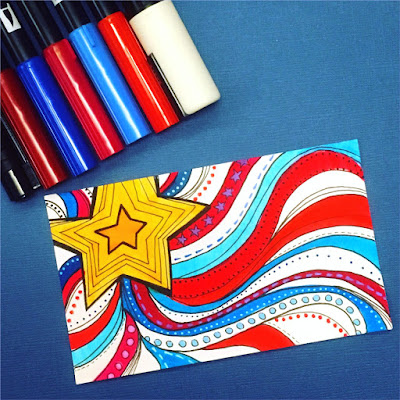 day thirty four: off prompt
here's my card from the 4th of july which was a very busy day with a cookout, fireworks and of course some DOODLING! ♥ 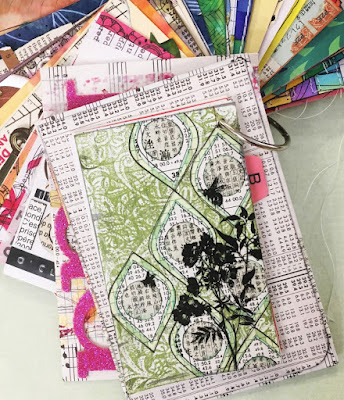 day thirty five: ogee
yes... i still love cutting out shapes and piecing or stacking them together as patterns. and ogee is one of my favorites! (fair warning: i had some leftovers, you will likely be seeing this idea again lol!)
Posted by lauren bergold at 8:30 AM