we wish you a digi christmas!

this week at ♥JINGLE BELLES♥ we are lucky enough to have one of my favorite lovely guest stars AND one of my favorite types of prompt, and they are BOTH in the same fortnight, so let's get right to it! our guest is the uber-talented gina cunningham, and the brief this time is near and dear to her heart... (and mine!) ...we're making holiday cards with at least one digital element involved, whether that be as simple as printing and coloring a digital stamp, or as complicated as making a multiple layered collage in photoshop that uses loads of actions, blending modes and digital elements. be as simple or as complicated as you like, just make sure to have some fun with it!

i've got LOADS of digital supplies, but sadly, i mostly use them only when i am making blog headers or other things that will be seen online. apparently, i'm slightly lazy when it comes to making hybrid cards, which is a shame. because they're fun to make, flexible, and so economical... since you can customize each bit, and you only ever need to print what you're actually going to use! for instance, i've been meaning since january to make a card that features the kit i used for this year's JB header, but it took a specifically digi-based prompt to make me actually DO IT. having said that, i really like how this came out:

you can see that in addition to using the same ingredients, i stuck pretty close to the layout of the blog header, too. well, i mean, i did DESIGN that, and i think it's pretty decent, and i sort of thought it'd make a nice card. i stand by that decision, lol! :)

when i'm doing a fully digital project (like the header) i spend a lot of time adding drop shadows to give the appearance of depth and texture. when i'm doing the hybrid version, i tend to want to cut things out and layer them loosely; sometimes with a bit of foam tape under the top edge, like this: 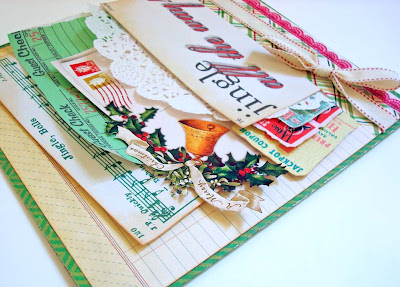 and now i bet you'd like to head over to ♥JINGLE BELLES♥ to see gina's and stephanie's hybrid masterpieces, right? then i hope you will start thinking what you can make when you JOIN US!!! ♥
Posted by lauren bergold at 12:00 AM