as promised, here i am to show you what was in nephew matthew's BIG... (and somewhat lumpy!) ...package, which i showed in the gift-wrap wrap-up yesterday: one super-deluxe, custom-made bulletin board, on which to hang all of his important school papers: 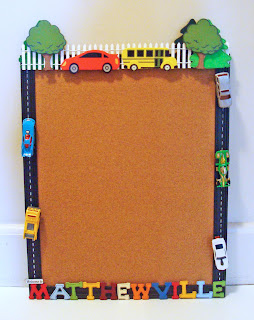 i should mention that the creation of a bulletin board was a special request* from my sister amie, who, coincidentally, is also matthew's mom! :) a couple of years ago, frustrated by the fact that there were just not enough cool and decorative bulletin boards available for less than a million dollars, she asked if i could make one for madeline; always game for a new challenge i said, "sure"! of course, something i only realized when i started this second assignment, is that GIRL-themed bulletin boards are actually quite a bit easier to make than BOY-themed ones. at least, they are if you are *ME*... which i am, lol! so i feel quite justified in linking up the results at the fabulous anything but a card blog, where this fortnight's challenge is to show off one's favorite (non card!) "make" of the year!

i mused for quite a while about the design, considering first a dinosaur theme, and then pirates (two of matthew's most current passions) before settling for something i thought might "age" a bit better: cars and trucks! as often happens when i've been pondering something for a bit, when the idea finally came, it turned out that my subconscious had done most of the work. all i had to do was sketch it (in the back of my datebook) when it arrived fully formed, while i was sitting in a restaurant one day with lovely husband jeff. (the curvy bits of road i imagined proved difficult to achieve, irl, so we skipped those!) 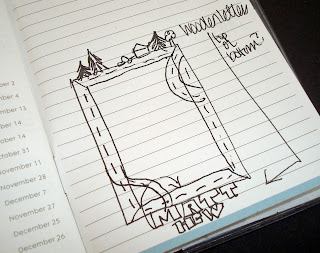 i had hoped to find a pre-made board with the right size and shape of frame, which i could paint black to create the "road" around the edges. when that didn't happen, we "frankensteined" a nice big corkboard from one source and an inexpensive (already BLACK!) poster frame from another. where i really lucked out was in wooden shapes to make the "town" at the top: all but the pine trees were pre-finished bits from michaels, which only needed a bit of tweaking! 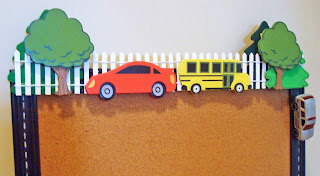 i painted the (plain wood- also from michael's) pine trees and letters with acrylic craft paint, then outlined them with an ordinary sharpie-- this works wonderfully, btw, but eventually kills felt tips, so have a couple extra pens on hand!!! everything which is attached to the top and bottom of the board was done with a combination of hot glue, and, in the case of the higher layers, some stacks of foam tape to make a better connection between the lumpy pieces. i drew the "passing" lines on road with a white paint pen, and then finally it was time for my FAVORITE bit: i attached a bunch of little metal racing cars to the "road" with black sticky-back velcro, so they can be taken down, moved around, re-arranged, or even-- because it turns out most of them have enough clearance-- even RACED, assuming one is on a hard smooth floor!!!

ok, i believe i mis-spoke a moment ago, when i said the velcro-ed cars were my favorite part; actually THIS was my very favorite part: 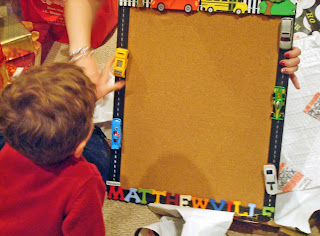 matthew immediately NOTICING the velcro-ed cars on christmas day, and taking them down, right away, to RACE!!! welcome to matthewville, little man... please drive carefully! ♥♥♥

*i absolutely LOVE IT when my sister or brother give me a "hint" towards something one of the kids needs or wants; especially when it is something like a bulletin board, which frankly, a non-parent such as myself would never have thought of making! it's always fun to try new things, and all the more so when one can still see the gift in question, happily in use in the child's bedroom, years later! awesome! ♥
Posted by lauren bergold at 12:00 AM