yepper. christmas was all about rainbows this year, specifically ones made of yarn. like this: 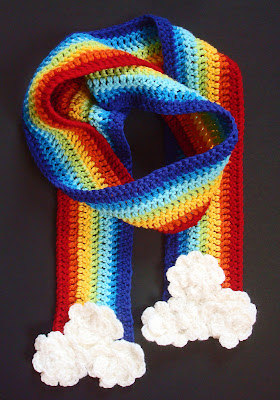 the amazin' stephanie saw this awesome "rainy day scarf" pattern on a super-creative blog called walker whimsy and sent me a link. of course i fell in love with it immediately, and then happily realized that our eldest niece, jessica, would also fall in ♥LOVE♥ with it immediately, so i made her one, immediately. :) and then i made stef one, too, because... well... just because! i should probably mention that this took place right around halloween, whilst we were without electricity for eleven days after hurricane sandy, and anything accomplished in the hours past dusk (around 5pm) had to take place by candlelight. so designing much of anything was what the adventurous crafter might call "challenging"; but the simple double-crochet construction made these totally DO-able; and the lusciously bright colors of cascade 220 really brightened up those dark nights!

it didn't take me long to realize that ALL of the nieces would enjoy wearing similarly fun scarves this winter, but i wasn't sure i could manage four more before christmas. and then it hit me: the littler nieces have been wanting to learn how to crochet, and in fact, we had some lessons over the summer. maybe they could make THEIR OWN rainbow scarves?! ok, the swirly clouds are perhaps slightly beyond a beginner, but i could mass-produce those. and afterall, the colorful part is only seven rows of perfectly straight-forward double crochet. and if practice makes perfect, they should all be DC *experts* at the end! i re-read the pattern, checking for flaws in my plan. i found one. in the very first line, the foundation for all the rows to come: "chain 240." hmmmm... i don't think 8-10 year olds are gonna quite be up to that kind of commitment. ok, nevermind.

but wait! the girls are all still reallllllllllllly into their american girl dolls, and LOVED the ponchos i made for them last year. in fact, that was a big part of why they all asked to be taught about yarn, because of the rich potential for DIY doll clothes! what if i devised a pared-down, doll-sized, child-friendly version of the scarf, and gave them "kits" containing all the colors of yarn and pre-fabbed clouds, for christmas, along with a few more lessons during the school holiday? yeah. that could work. i fiddled about a bit, making protypes. i went with single crochet instead of double, and settled for five rows rather than seven. 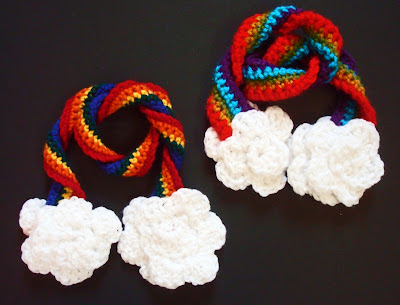 the first one was teeeeeeny. the second one was not quite right in terms of color. they were both swirly because that's what single crochet does when you make it into long, narrow rows. i decided the swirly-ness made it even cuter. i fiddled some more. i managed to cut the pattern down to an absolute bare minimum, "chain 75" and decided that it was probably a good thing american girl dolls don't actually require scarves for WARMTH, or need to wear them loose enough to not be strangled to death. but finally, i had something prettttty cute. 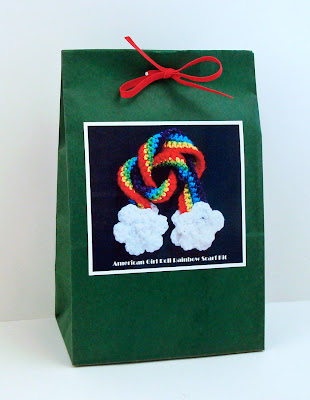 then i just had to make a whoooooooooooole lotta clouds. so i did. i made nice, bright, white, easy-to-see-by-candle-light clouds. yeah. lots of them. after a while even the fact that the yarn had a bit of sparkly thread running through it did not excite me. not even a little bit. i was sick of clouds. but it was totally worth it because finally i had four awesome "rainbow scarf kits" to bestow upon four awesome american girl doll-moms, on christmas day! 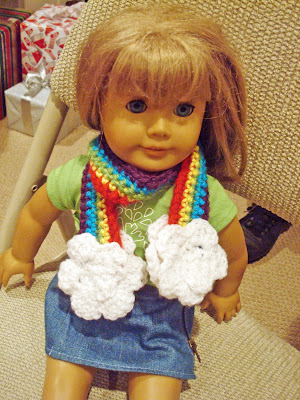 despite the not-very-enthusiastic look on kanani's face, the kits were a big hit. so much so that whilst the adults were still opening presents, the nieces and , at their request, were up in lindsay's room reviewing slip-knots and chaining! we're all getting together again this weekend for an intensive scarf-making workshop, and i can't wait-- let the crocheting commence!!! ♥♥♥
Posted by lauren bergold at 12:00 AM