by which i mean: every single bit of paper in my little set of 4x4(ish) thank you cards, including the glossy cardstock card bases, was either a leftover or an offcut! the little strips were from the big box of little strips (which, yeah, i pathologically save; mostly because i love cards like this!); the snowflakes are old (but still well loved); the brads are ancient (but ditto); and the twine was a heretofore unused gift. pretty sure i just hit the frugality hall of fame, right??!?!?! :) :) :) which is awesome, since this is my project for the new challenge at shopping our stash, which kicks off this morning and will run twice as long as usual, thus for TWO weeks, seeing out the end of 2012 by wrapping up on december 31st. the brief is to make a papercrafting project with a winter... but NOT HOLIDAY... theme. so think snow, snowmen, mittens, penguins, polar bears, sleds or sleighs, a fireplace, hot cocoa, daniel craig... no wait... i think we'll save him for summer, actually, because we don't really want to cover him up too much, do we, ladies? ;)

ok, what was i talking about, again? oh yeah. thank you cards. not as handsome as d. craig, but kind of appealing in their own way, see: 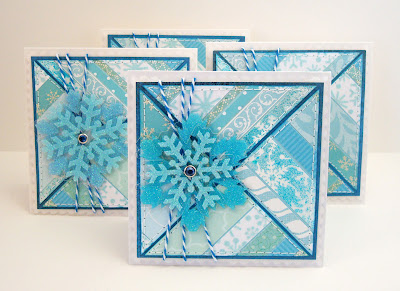 i had the bases all ready to sew up, and knew i wanted big snowflakes as accents, but wasn't quite sure as to how i'd used them. then i saw this week's sketch at unscripted-- problem solved! 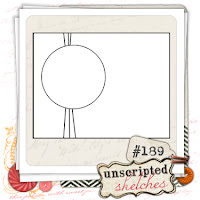 i also FINALLY managed to work in the "piggyback" challenge this week-- at least i think so; the brief was to make a real feature of the circle element by doing something interesting to it... does stacking up snowflakes count??! (if not, i guess i'll just have to try again next month!) :)

and now why don't ♥YOU♥ try heading over to SOS, where it's a veritable winter wonderland of papery pulchritude! (plus the cards look reeeeeeeeeeal niiiiiiiiiiiiice!) :)
Posted by lauren bergold at 7:00 AM