...about my thanksgiving weekend papaya art store binge* now that i've used some of the proceeds (ie this divine glitter giftwrap) to make a gift for someone else: 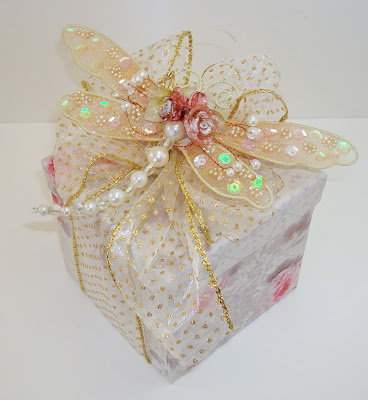 actually i made two of them; for my friends, janet and liz. i used a couple of dollar store gift boxes that were frankly... well... i hate to criticize another designer's vision, but these things were ugly. i should've taken a "before" picture, but, as usual, i only thought of it after. (sigh) ah well. i actually covered the box and the lid permanently, rather than just wrap them, and i've attached the dragonfly to the bow, and tied the ribbon in such a way that it can be easily slid off to see what's inside, and then slid back on again. because something that's happened a couple of times in the last few years is that recipients of my fancier packages have flatly refused to open them until i have promised to "do 'em back up again" before i leave. so i've had to get a bit cleverer during the initial process to make that easier! plus, this way, the boxes are re-usable. 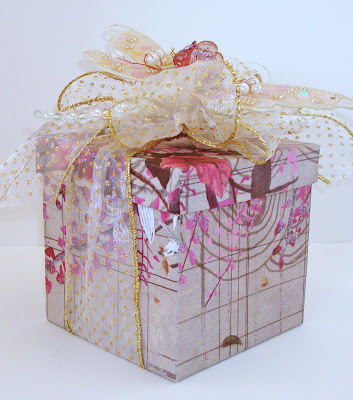 the dragonfly ornaments were from a craft fair, or possibly christkindlmarkt, last year... or maybe the year before? i bought a bunch of them, and thought i'd given them all away at the time. i don't know why i didn't, but-- long story short-- i found a few "escapees" on the gift shelf in my attic. i had just been drooling over the glitter paper, actually, and when i happened to see them sitting next to the ugly boxes, i had an "AHA!" moment, and suddenly knew how i ought to present the artisan chocolates and bookstore giftcards i was planning to give.

here they are together: 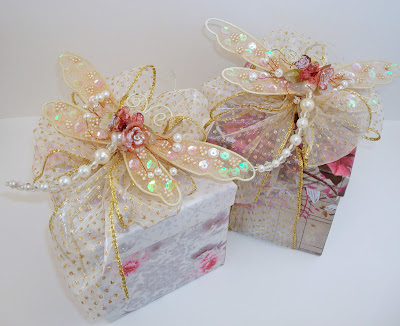 i was under the impression i'd done a step-by-step tutorial of the box-covering process, (maybe for a pixie dust paperie post??) but cannot find it now. i might have to make another early in the new year, and shoot all the steps, because i've actually developed a pretty good system over the years and would LOVE for someone else to learn from my "trial and error"... mostly error... attempts which proceeded it! ♥

*in my defense, there was a REALLY GOOD SALE, and amy shared her coupon, and i used it mostly** to stock up on presents!

**ok, yeah, and possibly maybe also one or two tiiiiiny and totally necessary things for myself. :) :) :)
Posted by lauren bergold at 12:00 AM

Email ThisBlogThis!Share to TwitterShare to FacebookShare to Pinterest
Labels: gift wrapping, papercrafting (but not cards), xmas