last week's HEART the ART prompt was QUESTION. this page is really really really not where i thought i was going with it...but it's what i made and i have to say i that i think i like it A LOT! :) 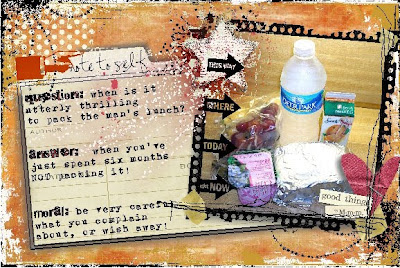 generally, when i "go digi" for these, it's for practical reasons; usually because i have more to say than will comfortably fit on a 4x6" page in my big sprawly handwriting. and that is actually why i did it here...but somehow instead of just dropping in my photo and adding the text and maybe a frame, i wound up almost making a mini LO! i'm not entirely sure how that happened, but i had a great time doing it, which is sort of the point, right?!

by the way, in case you are wondering, *YES* that is jeff's genuine lunch, right after i assembled it, last wednesday night, for the first time in nearly six months BECAUSE HE WENT BACK TO WORK ON THURSDAY!!!!!!!!!!!

here's the short version of what happened regarding his vertigo: after A LOT more tests, and a whole terrifying sub-plot of seeing several neuro-surgeons, due to the discovery of an anomalous artery near his aural nerve... (which might've led to an operation that is not TECHNICALLY brain surgery, but has the same risks) ...while we were waiting to get in to see yet another specialist, jeff went on a second round of stronger steroids, just to see if there was any chance there was still inflammation left from the original ear infections (last jan) that might be persuaded to vacate the premises. and there was. and it did! and his symptoms cleared up--AND (more importantly) STAYED GONE after he stopped the medication! there are still some follow-up issues, and also a chance the full-on dizziness could come back the next time he gets a sinus/ear infection; but for RIGHT NOW he is FINE, he is thrilled to be going to work every day, and there is GREAT REJOICING throughout bergoldia!!!!!!!!!!!

many MANY thanks for all of your well-wishes, prayers, good thoughts, kind words and friendship...which really reallllllllllllllly helped and meant more than i can express! ♥♥♥, darlings!!!

Posted by lauren bergold at 8:17 AM