what are the odds??!

you already know that we had a FABULOUS time in north carolina. even the famous "back of doooooooom" was fairly well-behaved! there were, however, a couple of teensy tiny disappointments i must report:

1. knitting monkees is harder than you think. as it turns out, i had to knit the first 10-12 rows of mine 3 different times! i am now on attempt #4...which seems like it will actually work. i will take a photo when the piece of monkee anatomy in question is large enough to be observed with an ordinary (non-microscopic) camera.

2. western north carolina is NOT a frozen dessert mecca. in fact, during the entire trip i had only ONE ice cream and one gelato...and neither were particularly tasty! (remember: this is ME--perfectly content with a weight watchers ice cream sandwich--saying that!!!)

3. there were no cool flea markets, thrift shops, or antique stores to be found anywhere. i dunno if it was too early in the season, or we just didn't stumble upon them, or there genuinely just aren't any where we were...but whatever the reason, the result was the same: i did not come home with *anything* cool or vintage.

as i said, these were disappointments of the very smallest and most ignorable kind, which i would not even have mentioned were it not for the following

amazing circumstance
which i shall now relate to you: the other day, back in lambertville, whilst killing a bit of time, i wandered into a used bookshop to say hello to a friend of mine. while we were chatting, i noticed, on a very low and out-of-the-way shelf, a small and somewhat tattered box of old postcards. now, i've been in this shop 9,230,677 times. at least. and i never noticed that box. but i am assured that it has been there--untouched, unsold and unregarded--since the carter administration. most of the cards were......well, you know how i looooove and revere vintage paper of all descriptions, and you also know that i can find something to ADORE where other people see only trash that ought to have been discarded eons ago, right? so when *I* say, "most of the cards were total rubbish" you will get an idea of how very lackluster they must've been! in fact, i would probably have stopped almost immediately, just out of hygenic concerns. but i was there...and i was waiting for someone...so i stubbornly carried on. 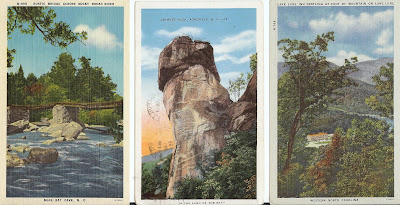 L to R from top: chimney rock from a distance, green river gorge, the broad river near bat cave, chimney rock and the lake lure inn

seriously: what ARE the odds??!
Posted by lauren bergold at 8:16 AM