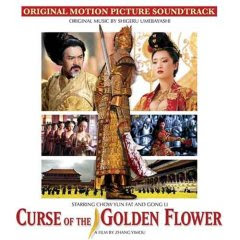 one good thing about my back being out (...as it has been AGAIN for the last week or so...) is that it's the only time i ever get a chance to catch up on foreign films. actually, this is the ONLY good thing about these circumstances. (and i'd trade it away in a heartbeat for a non-wonky back, thank you very much!) but hey...i'll take whatever good there is, and be glad of it... here are some movies i have enjoyed...or not...recently:

la vie en rose
in the same way that the essence and spirit of ray charles seemed to positively flow through jamie foxx in ray, marion cotillard appears to actually be channeling edith piaf. it's extraordiary, impressive, and occasionally spooky. the film is a magnificent and lavish depiction of piaf's world, life, and art. what it isn't is cheerful. (if ever there was a "vie" that was emphatically NOT "en rose" it was piaf's!) but this hypnotic film is worth a look for the soundtrack and best-actress-winning performance alone.

lust, caution
has ang lee ever made a bad film??! the director of eat drink man woman, sense and sensibility, and brokeback mountain is yet again right on form. set in 1948 shanghai this film is gorgeous. it's magnificent. it's sexy. it's perfectly cast and flawlessly acted. it's got intrigue, suspense, espionage, plotting, counterplotting, sex, love, lust, longing, and...of course...mahjong. but again, if you're looking for laughs, this is SO not your film.
russian dolls
a follow-up to the excellent l'auberge espagnol, this is one of a very small number of film sequels to equal...maybe even surpass...the original. five years after the events chronicled in the first film we catch up with xavier in paris where he's a working writer (though still not a published novelist) and about to meet up with the rest of the gang for a wedding in st. petersburg. if you've been reading this list in hopes of a light and frothy french film: here ya go!
apres vous
and here's another light and frothy french film! (wahey! two in a row!) unfortunately this one is all froth, with no underlying substance to support it. daniel auteuil and jose garcia give wonderful performances...as characters that we can't reallllllly believe in...and thus, ultimately, we fail to care about. or at least, i did.
cache
let me preface this by saying, as i often have, that i would be willing to watch daniel auteuil read the parisian phonebook. having spent two hours watching cache, i actually wish he HAD been reading the phonebook. yes it's a taut, psychological thriller, and yes it raises interesting questions about truth and lies, memory and perception. but booooooooooy does it ever move slowly...we're talkin' geological time. c'est vraiment, c'est trieste.
avenue montaigne
a young girl, fed on her granmuzzer's tales of parisian life, leaves her small town for a waitress job in the city. there she meets the actors, art collectors, and musicians who gather around le bar de theatres. everyone she meets has their own story which we follow, and all the stories we follow weave in and around each other. this charming, whimsical, robert-altman-esque slice of life film doesn't breaak any new ground, but it's a pleasant enough way to spend a couple of hours.

siberia
if you are easily offended, DO NOT rent this film. in fact, you might even want to skip my review of it. the basic premise is this: two young dutch lads, living in amsterdam, make their living by picking up pretty female tourists, sleeping with them, and stealing their money. they collect the photos from the girls' passports...their goal is to get one photo each from every country in the world. to this end, they will lie, cheat, dodge, dive, cajole and sneak around. then they meet lara--a russian girl who's smarter than both of them and twice as ruthless--and things really get interesting.

wristcutters
this isn't a foreign film, but it's definitely off the beaten track. the setting: an afterlife exclusively for people who've killed themselves. neither heaven nor hell, it's a limbo-like place that, as one character observes, is only slightly more depressing than his life was. when the protagonist, zia, discovers that his ex-girlfriend has also committed suicide, he sets off on a rambling roadtrip to find her. yes, i know, this all sounds very peculiar and a bit depressing. did i mention it's a comedy? yepper...and a LOVE STORY, too!
curse of the golden flower
did you like crouching tiger, hidden dragon? elizabeth? the lion in winter?? if your answer to one or more of these is "YES!" stop reading and go rent this baby, pronto. it's big, it's sprawling, it's sumptuous. it's got palace intigue, historical drama, plots and subplots, plenty of martial arts action, and a cast of thousands. what more could you ask for? ok maybe one thing...to see it on a big giant movie-theater screen where it belongs!
Posted by lauren bergold at 6:30 PM

Email ThisBlogThis!Share to TwitterShare to FacebookShare to Pinterest
Labels: movies/tv