it occurs to me that i have not posted anything of a papercraftical nature all week! what's up with that??!

it's not that i haven't MADE anything cool...in fact i've made some decent cards this week, if i do say so m'self...it's just that i can't show them...yet. they're for the special caardvarks design team gallery that goes with our next challenge, starting 4-20. ordinarily, i would have time to do some little challenges in between, or at least make my paper adventure page for this week. but since we'll be on vacation next week, and i am still contending with the back from H-E-double-hockey-sticks... (many, many thanks for all the good wishes on that score, btw; it's MUCH better, but not yet 100%!) ...anyway, the point is, that i haven't made as many items as usual, and thus i am forced to fall back on the old stand-by...showing some pages i kind of like from my three beautiful things journal. so here ya go! 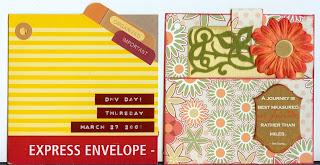 (the lefthand one is a cutdown DHL envelope & contains some receipts from awdrey's "DMV day"; the righthand one was me playing with some new products--the felt fusion and dcwv chipboard sayings--and some scraps)
some picture pages:

(the monkey one is an extra pic from sockrates & tipsy's most recent photo shoot; the tiger is from a magazine and says, "here kitty kitty" in rub-ons, and "warning: objects in book may be closer than they appear" in dymo labels)
some pages that don't really have anything in common...except i like them... :) 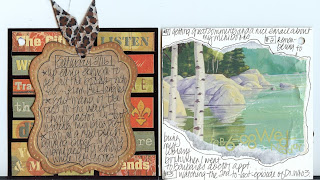 (the lefthand one is me using up some word stickers i didn't really like--tho they sort of "work" as a background, dontcha think?; the righthand one is part of the cover from a clothing catalog; it accidentally got wrinkled when i was gluing it on...but i like the effect!)

Posted by lauren bergold at 3:53 PM

Email ThisBlogThis!Share to TwitterShare to FacebookShare to Pinterest
Labels: 3 beautiful things, papercrafting (but not cards)