You Must Be 21 or Older to Enjoy This Post

Just kidding! Hi guys, today I have a couple of fun and slightly snarky birthday cards featuring the new Eyelet Outlet Wine Brads (which feature bottles and glasses in both red and white) plus Grape Brads, which have red, green and purple grapes in each packet! 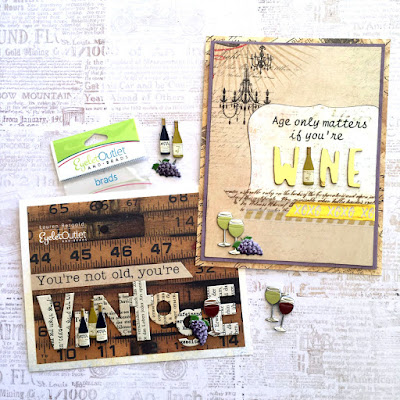 I've mentioned before that sometimes when I have two different ideas for a card, rather than trying to choose just one, I actually make them both. In this case, I wound up using two different sentiments, but I think you could easily interchange them. My first card is a bit more elegant, thanks to a scrap of pretty chandelier paper, gold metallic alphas, and some lovely newer tapes. I chose to emphasize the word "wine" by using larger letters and swapping out the "I" for one of the bottles in the Wine Brads set. Down in the corner, I added two glasses from the same set and a bunch of Grape Brads. I finished off with some gold foil XO Tape, as well as some Script Tape and Skinny Washi in a little cluster. 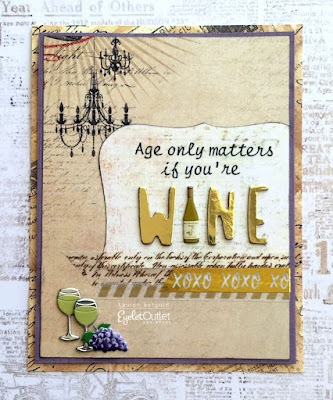 For my second card I again used a "half and half" sentiment, but this time the emphasized word is made with Foreign Text Chipboard Letters from my Etsy shop, Just Enough Stuff. Instead of swapping out a letter, I attached several bottles and a glass from the Wine Brads and bunch of Grape Brads directly to my oversized letters, which span the width of my landscape oriented A2 card. I like the funky vibe and especially that either card would work for a masculine or feminine birthday! 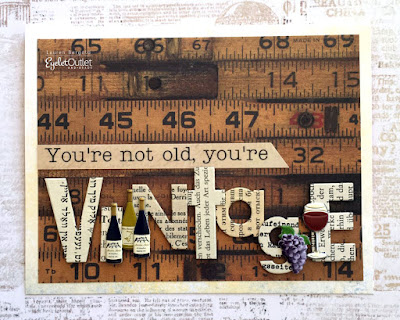 Contrary to my post title, you can actually buy Wine Brads --also Beer Brads, Cocktail Brads, and even Champagne Glasses in the Wedding Set-- at any age, so why not pop over to the Eyelet Outlet Store and see what delicious Beverage Brads are available?
Posted by lauren bergold at 3:00 AM