if you've played along with us at ♥JINGLE BELLES♥ in other years, you'll probably know that thanks to kathe deck, whose brilliant idea it was in 2011, we do a reuse/recycle/upcycle challenge every year right around earth day, and since it's that time again, guess what the brief is this fortnight? yep, the amazingly fun earth day special! here's what i made: 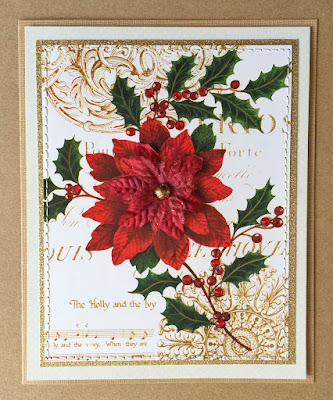 one of my favorite things about this challenge is figuring out which recycled things each person has used. because a lot of the time, the cards are so amazing, you'd never guess they are made from "non traditional" ingredients, so to speak! we've seen everything from diecuts made of flattened-out soda cans, plastic salad containers converted into shrinky-dink-like elements, scraps of carefully saved giftwrap, illustrations from a catalog, pictures off a particularly pretty tissue box... well, as you can imagine, there's a whole list of great ideas! this time i went with two of my favorite recycling targets: a bit of pretty papercraft packaging and one of the store-bought holiday cards i received last year: 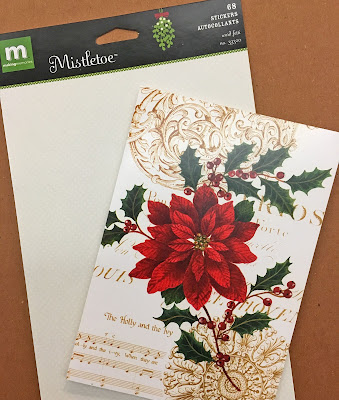 i'll admit that using the amazingly pretty cardfront really felt like cheating, lol! because let's face it, it doesn't need much, does it? i added some fabric poinsettias to the middle of the printed one and attached them with a jingle bell brad. i adorned some of the printed holly berries with sparkly eyelet outlet gems. then i matted the trimmed down panel onto a piece of gold glitter paper, followed by a mat cut from the packaging. et voila. i called it DONE. 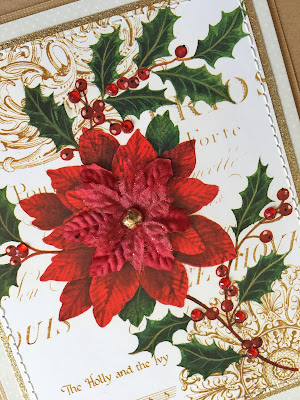 stephanie, of course, has something amazing to show you as well, so why not hop over to ♥JINGLE BELLES♥ and check that out whilst thinking about what *YOU* can pull out of the recycling bin or wastepaper basket to make your own earth day masterpiece!
Posted by lauren bergold at 12:00 AM