because index cards are ♥AWESOME♥ dontcha think? ok, sorry, that's a silly question, isn't it? here's another little clump of cards i added to my book this week: 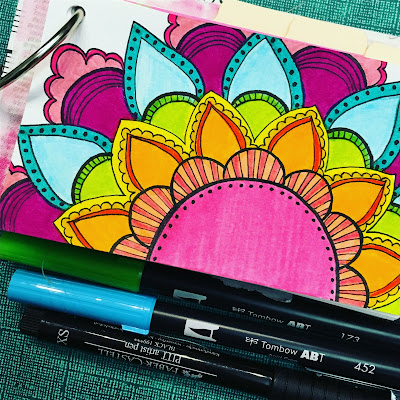 day 7: off prompt
this one's an "i was stumped" two-fer: couldn't think what to draw, so i went with "mandala"; couldn't decide on a color scheme, so i opted for "rainbow". if the default settings ain't broke, why would i fix them?! :) 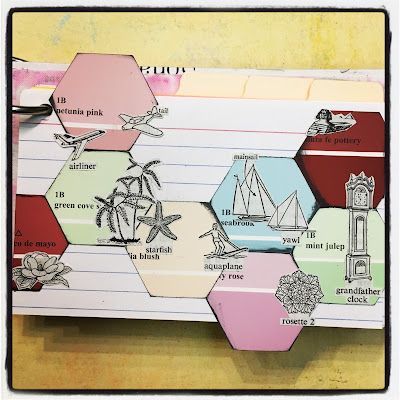 day 9: ombre
i had this awesome idea about compiling a gradient composed of the different patinas of various bits of vintage paper. i may have very slightly underestimated A) how much range there is and B) how much vintage paper i own. so it wound up being made on three cards that i taped together, a fact which is hard to tell in this tiny montage. there's a bigger pic on instagram.
(on the other hand, i still love this idea and have plans to expand it at a more collage friendly size, that doesn't need eyelet outlet washi tape hinges in order to make it fold up into 3x5 card size!!!) 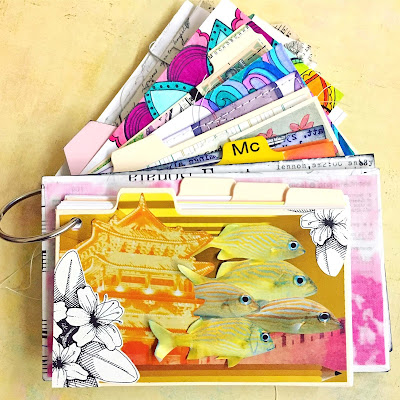 day 10: sunshine yellow
this collage was ENTIRELY yellow until the very very end when i added the b&w flower illustration, which you'd think would dilute the yellow-ness, but actually it intensifies it. ...interesting... 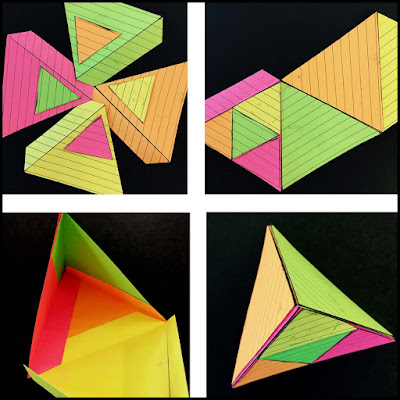 day 11: tetrahedron
don't bother googling, i'll tell you right now that a tetrahedron is also known as a triangular pyramid; it's officially described as a dimensional form whose four identical and equilateral triangular planes can be composed of four identical and equilateral triangles. i know that for a fact, because i had to look it up on wikipedia, too! and then, of course, i had to use my tiny sliver of new-found knowledge and prodigious non-engineering skills to build a 3D tetrahedron out of neon index cards. obviously. (fyi: in this very silly story you will seriously find EVERY SINGLE THING you need to know about me, lol!
(PS: if you want to see this "in action" there's a flipagram on my IG page! bc if you spend time building a dimensional tetrahedron out of neon index cards, you probably wouldn't want to post JUST ONE photo of it!!!)

there's loads more info about the index card a day project at daisy yellow art, including links to the facebook and instagram populations. and no... it's NOT TOO LATE TO START if you want to!
♥♥♥♥♥
Posted by lauren bergold at 11:00 AM