we're still making cards with windows or other apertures cut into them at ♥JINGLE BELLES♥ and this week i've done something i rarely ever do... used the same ingredients, two cards in a row. but i really HAD TO, this time, because about 15 seconds after i attached the diecut holly leaves adorning the window on last week's card, i realized that i should have used the holly dies to cut the actual window in the card! so i did:

in the meantime, having treated myself to the sizzix/tim holtz "holiday greens" dies last week at paper anthology; this week i treated myself to the MINI size of the same dies! so when i cut through the music paper, i was able to arrange ALL the holly leaves from both sets, into a larger spray, which i think looks really cool! of course, i could have gotten a similar effect by making more than one pass using the larger holly branch too. or i could have arranged one of the other greens dies with the holly on my magnetic platform for that matter. btw, i'm not allllll that much of a gadget girl, but i must say that's an accessory which has completely changed the way i think about making window cards and/or doing complicated or multi-die cuts. if you have wafer thin dies and you don't have the sizzix magnetic platform, you are missing out! you can get one at paper anthology, btw. just sayin'... :)

here's a pic that shows the aperture a little better. i put some little dots of foam tape around the holly leaves underneath, so that there'd be a little space between the top and bottom layers. i also used the darkest green paper i had, for maximum contrast! 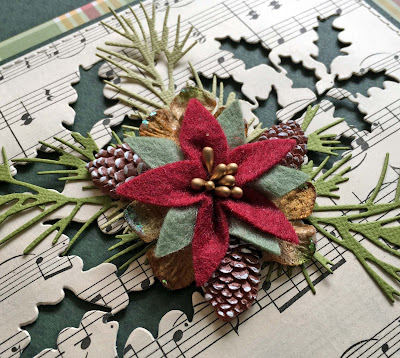 meanwhile, stephanie also has a beautiful and HOLE-y card to show off. why not hop over to ♥JINGLE BELLES♥ and check it out right now?!
Posted by lauren bergold at 12:00 AM