the holly and the ivy

we're celebrating holiday foliage at ♥JINGLE BELLES♥ this fortnight, so in addition to --or instead of-- the eponymous holly leaves and ivy stamps, it's time to break out the evergreen washi tape and mistletoe journal cards. oh and by the way, did you know that poinsettias, which totally look like flowers, are actually composed entirely of leaves, no matter what their color? for that matter, you needn't build your card exclusively around foliage, just include a bit of christmas greenery somewhere in your design. of course, if you want to build your card entirely around foliage and flowers, we won't stop you, lol! (btw, that's what i did, see?!)


everyone knows i love florals so it's probably not a big surprise that i was able to compose an entire lumpy bumpy card from holly, ivy, poinsettias, pinecones, red berry sprigs and those cool velvetty red flowers that i think are hydrangeas, except i'm pretty sure they shouldn't be that color? they look good, though, in a little cluster, on top of some birch bark patterned paper, with an accent of eyelet outlet pine tree washi tape. of course it also helped that i found the *PERFECT* sketch at atlantic hearts sketch challenge: 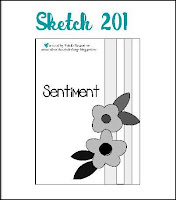 stephanie also has something fab and foliage-based to show you. why not hop over to ♥JINGLE BELLES♥ and check that out right now, darlings?
Posted by lauren bergold at 12:00 AM