would you like to see my index cards from week three? before you answer, i should probably warn you that if you say, "no thanks" --as of course is your right-- the rest of the post falls kind of flat... no pressure, tho! :) :) :) 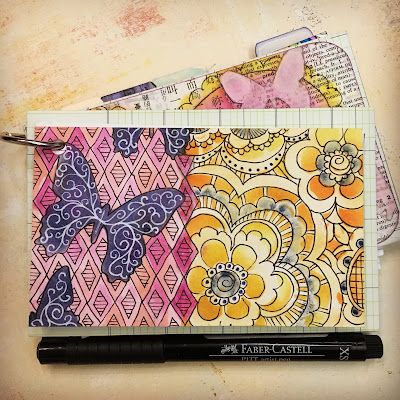 card 12: off-prompt
not to be obnoxious, but i love this one! the irony is that everything i like best about it was something added to cover up a "mistake" of some sort: the harlequin stencil shifted, i got a big navy blue smudge before i planned to use navy blue (so WHERE'd the ink even come from to be smudgey in the first place, we ask ourselves...??!) the pen went wonky, etc etc; the point is that sometimes improvised "fixes" actually turn out cooler than the things we originally PLAN to do, which is why if you have a little extra time to experiment, it's great to keep going rather than start over when things go wrong... just sayin'... 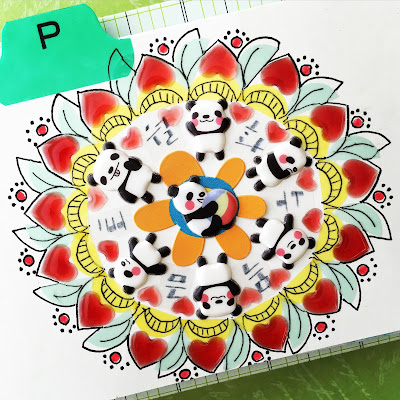 card 13: playground
these clever playful pandas have organized themselves into the world's first panda mandala... or "pandala" if you will? or, maybe not. :0 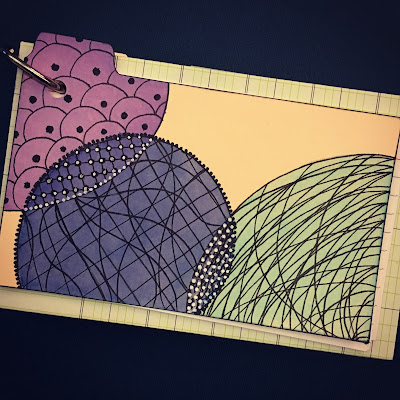 card 14: venn diagram
after the smashing success (in my head, anyway) of "pandala" i thought venn diagram + zentangle might result in a cool "venntangle"? it's not what i expected, but it kinda works. 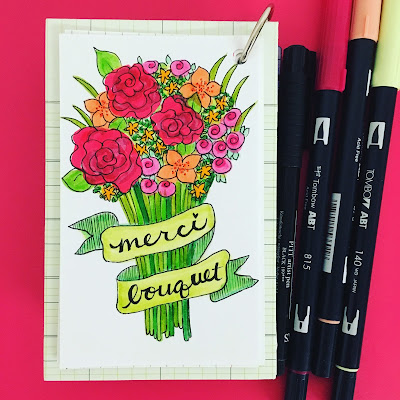 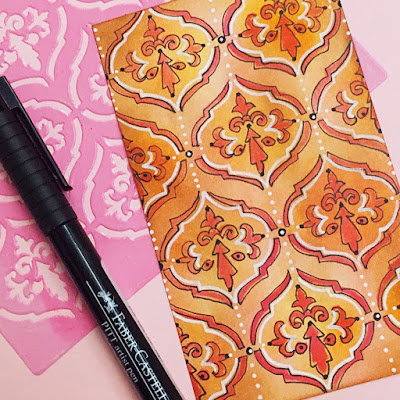 card 16: wallpaper
stencils and inks and pens are all quite fun to play with at the end of an evening. so this night, that's exactly what i did! card 17: landscape
for this one, i had a great idea about "thread painting"... but by the time i came to work on it, lovely husband jeff was sound asleep in the room directly above my sewing machine. so i settled for markers. i must say, this really is a fun and soothing way to color... 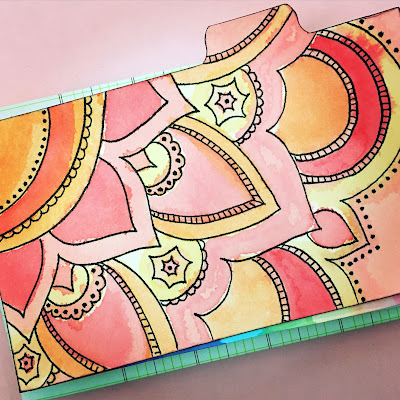 card 18: orange
colorbursts in tangerine, orange and burnt orange... with special guest stars yellow ochre and fuchsia! (yes, there are A LOT of mandalas in ICAD; basically if i get to the end of the day without a specific plan or concept for the prompt, the ICAD machinery automatically defaults to its mandala setting, lol.)

hope you're having a lovely weekend, generally; a great father's day, in particular; and that sometime before it's over you get to do something creative and fun! ♥♥♥

ps: it is DEFINITELY not too late to start ICAD; it's never too late to start a daily art-for-art's-sake practice, heck, you could do it in february if you want! if you've been thinking about it, don't worry about catching up or planning ahead or anything else... JUST START! check out the official ICAD FAQ page at daisy yellow art for all the details and check out the #dyicad2016 hashtag on instagram and facebook for some amazing ideas and to make a new friend or two! if you're blogging ICAD, be sure to link up on this post here!
Posted by lauren bergold at 10:55 AM