if you play along regularly at shopping our stash, you may remember that back in january we had a special challenge in our late friend leslie's honor; well we're back again with a second (gah!) PINK challenge, but this time in addition to seeing PINK on your project, we'd like you to incorporate a "UFO"... no, not the alien kind... just an UNFINISHED object or leftover from another card; you know what we mean, right? the background you made but never used; the image you colored so carefully and then swapped out for something else in the end; the 27 hearts you diecut before realizing only about six would fit?! yep, that's what we're talking about, so go grab the box or baggie or file folder in which you keep those sorts of things and while you're at it, find something (gah!) PINK to include as well! here's what i made:


as we know, i like (gah!) PINK... quite a lot, actually. i also change my mind fairly often in the course of making... well... ANYTHING, really. so i generally have quite a few UFO's and a fair proportion of them are (gah!) PINK! so i was quids in for this one, lol! here are the things i "pulled" thinking they might work together: a medium sized hand-cut heart, a few argyle diamonds leftover from the mother's day card i made for the eyelet outlet blog, a butterfly diecut of unknown origin, a bunch of pink silk flowers that were surplus to requirements in this SWHIA collage, a chipboard + giftwrap flourish that must've been made right after i bought that TH die, because the little bits of black die material that come off in the first few passes were still clinging to it: 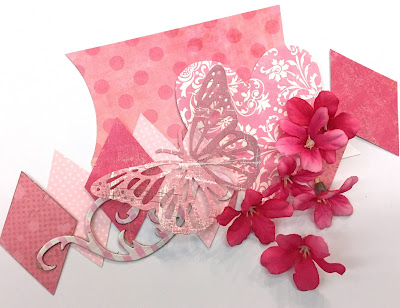 shockingly enough, i used almost everything in the pile, though i did wind downsizing the butterfly, and i STILL have a couple of argyle diamonds left, which is fine since i still have some argyle ideas floating around my head. the big serendipitous "surprise" in all of this is that i actually found a piece of ancient brown patterned paper with a diamond pattern on it, which was a GREAT size to hold the argyle diamonds... so instead of measuring, etc, i just popped them onto this pre-made background, added some machine stitching, et voila! 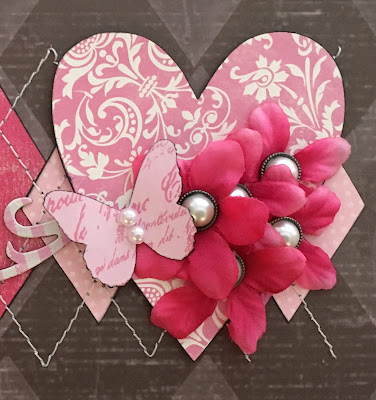 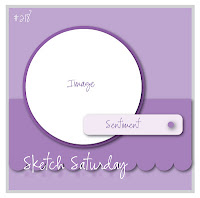 and now i invite you to hop over to SOS and see the other fabulous (gah!) PINK projects; be sure to leave my wonderful dt darlings some love as well, won't you?
Posted by lauren bergold at 6:30 AM