ok, yes, i realize if you live in the northeastern united states... (where we've experienced an extravagant abundance of rain in the last two weeks) ...the word "showers" is the last thing you want to hear, but this time it's 100% confined to papercrafting, i promise! this week's challenge at shopping our stash is called "april showers bring may flowers" and we've got multiple choices as to how you approach it: you can go with umbrellas or rain in any context... OR you can make something with flowers... OR you can make a card or gift for a baby shower or wedding shower. lots of ways to take this, so use whichever works best for you.* here's what i made:


yep. i went with flowers. ~SURPRISE~! i do have a pretty cool stash-usage story, though. last week when i was unearthing my UFO's, i found an entire ziplock baggie full of those cardstock punch-out flowers that were a very big deal for like six months back in... 2004 or so?? i think every company made some, and it's entirely possible that i bought one sheet of each. :) 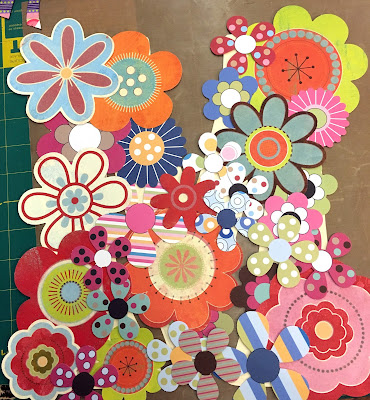 somehow, despite the fact that i used them fairly often at the time and have continued to do so intermittently ever since, i still had A LOT left. meanwhile, niece madeline's 12th (twelfth!!!) birthday is next week and her family party was this past saturday. her gift was pretty bulky so i needed a big gift bag, which meant a big decoration. i decided on a giant monogram (an M, obviously) and thought it would be cool to fill it with the diecut flowers. 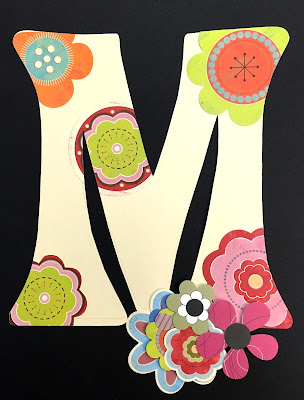 i stand by that decision, despite the fact that unless you're actually close enough to TOUCH it, the flowery M just looks like it was made out of a particularly exuberant 1970's-style patterned paper. it's a pretty patterned paper, though... and maddie loooooooooooooved it! i backed the completed letter with a little mat of mint green cardstock to sturdy it up, and attached it to the gift bag with a minimal amount of foam tape, so she can take it off the bag and hang it on her door or somewhere in her room as a sort of decor piece. the big flower is on a clip, so i just clipped it to the letter, so she can choose whether to leave it on there or wear it in her hair or on her jacket or... whatever... 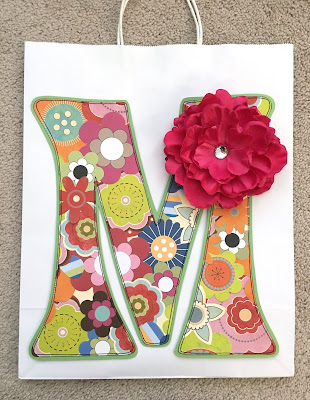 need a little more inspiration for april showers and/or may flowers? my SOS design team darlings have lots to spare... check it out! ♥

*it isn't specifically mentioned in the description i received for this challenge, but i'm going to go out on a limb and speculate that if you make a card which features the pilgrims' ship the mayflower, that would also be acceptable, and i, for one, would be VERY impressed lol!  :) :) :)
Posted by lauren bergold at 6:30 AM

Email ThisBlogThis!Share to TwitterShare to FacebookShare to Pinterest
Labels: gift wrapping, papercrafting (but not cards), shopping our stash