sometimes procrastination is a GOOD thing!

i mentioned last week that jeff had the chance to use up a few extra vacation days right before christmas, and that he was excited about last-minute opportunities to spend a day in bethlehem at christkindlmarkt and later for us to take an overnight near his parents' house so we could visit longwood gardens. we also unexpectedly go the chance to play host to some cousins from out of state who were in town for "a limited engagement" during christmas week. all of these events were wonderful, but there's only so much time in a day, so the thing that got pushed to the back-burner was december daily. i was still taking photos and composing pages, but photographing and posting just didn't happen. and i'm *fine* with that. afterall, there's no statute of limitations in papercrafting, darlings! my book is finished now, though, and i have a mega-wrap-up post for you, so let's get started: 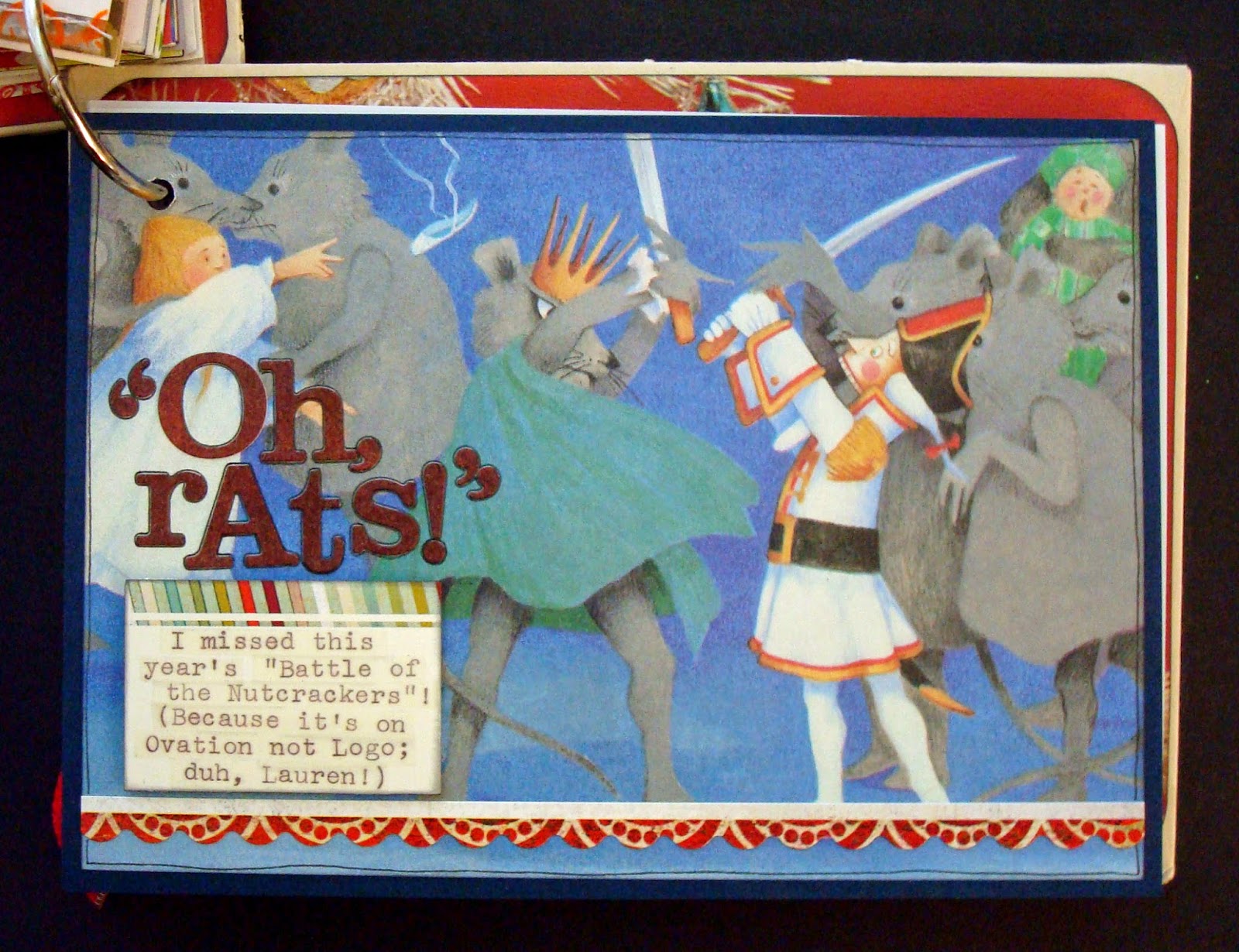 dd19: oh rats
all december i'd been periodically checking the listings on the logo channel to see when they'd be showing their annual "battle of the nutcrackers" in which a different version of the ballet airs each night. and it was NEVER listed. the friday before xmas i discovered why... because it's not on logo, it's on ovation! so here's a page that's cute AND an excellent reminder to be careful about asking a question to which you THINK you know the answer. 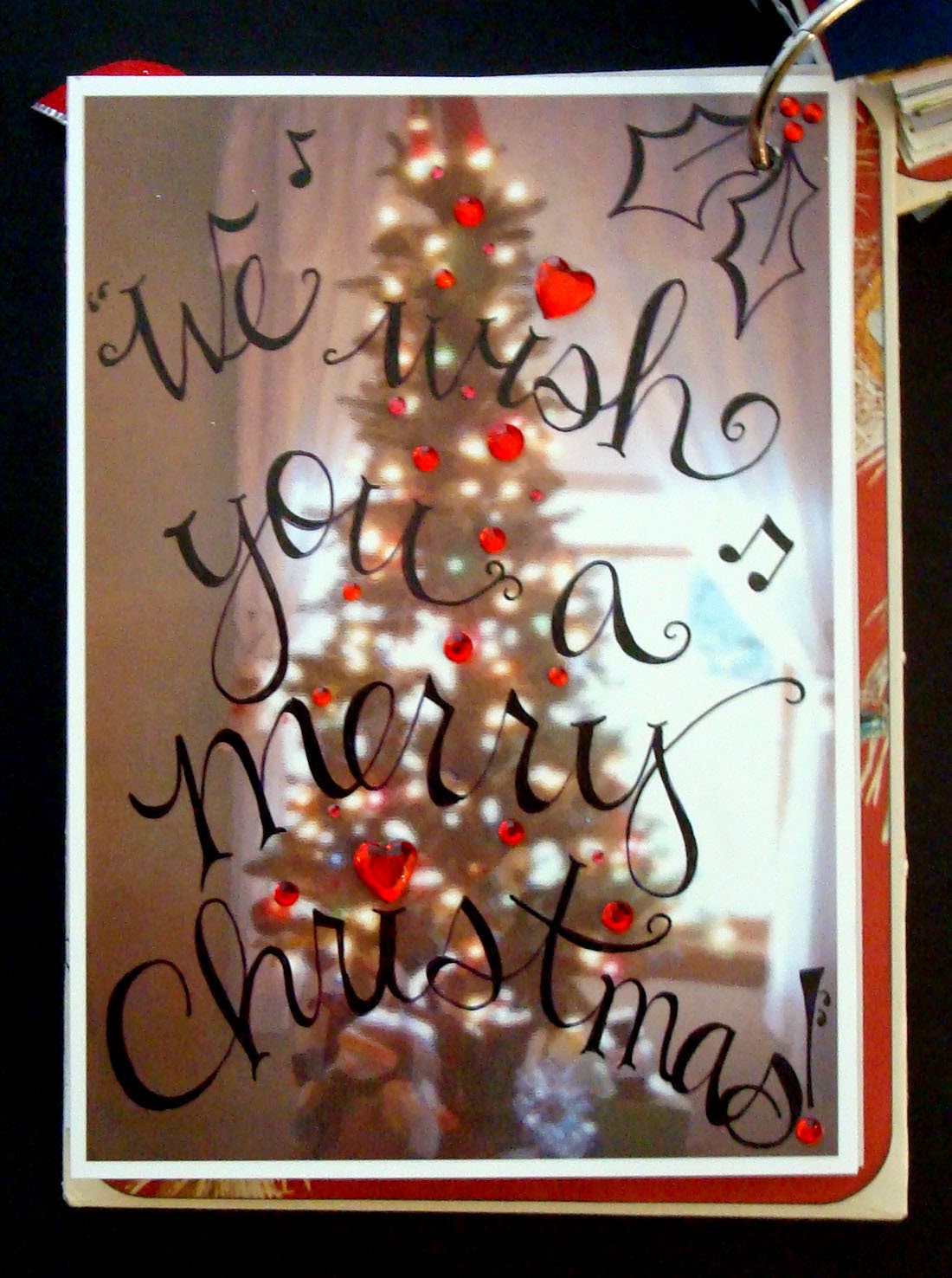 dd20: (photo-less) christmas with the bergolds
apparently it's going to be a yearly tradition that there will be one BIG december event at which i utterly fail to take any photos at all. last year it was brunch with my family. this year it was christmas dinner with jeff's family, which took place on the saturday before the big day. somehow i came away with only one quick iphone snap of the badly backlit mini tree in my MIL's living room that i took when we first arrived. once there were cool photogenic PEOPLE onsite, it seems i forgot all about photos. 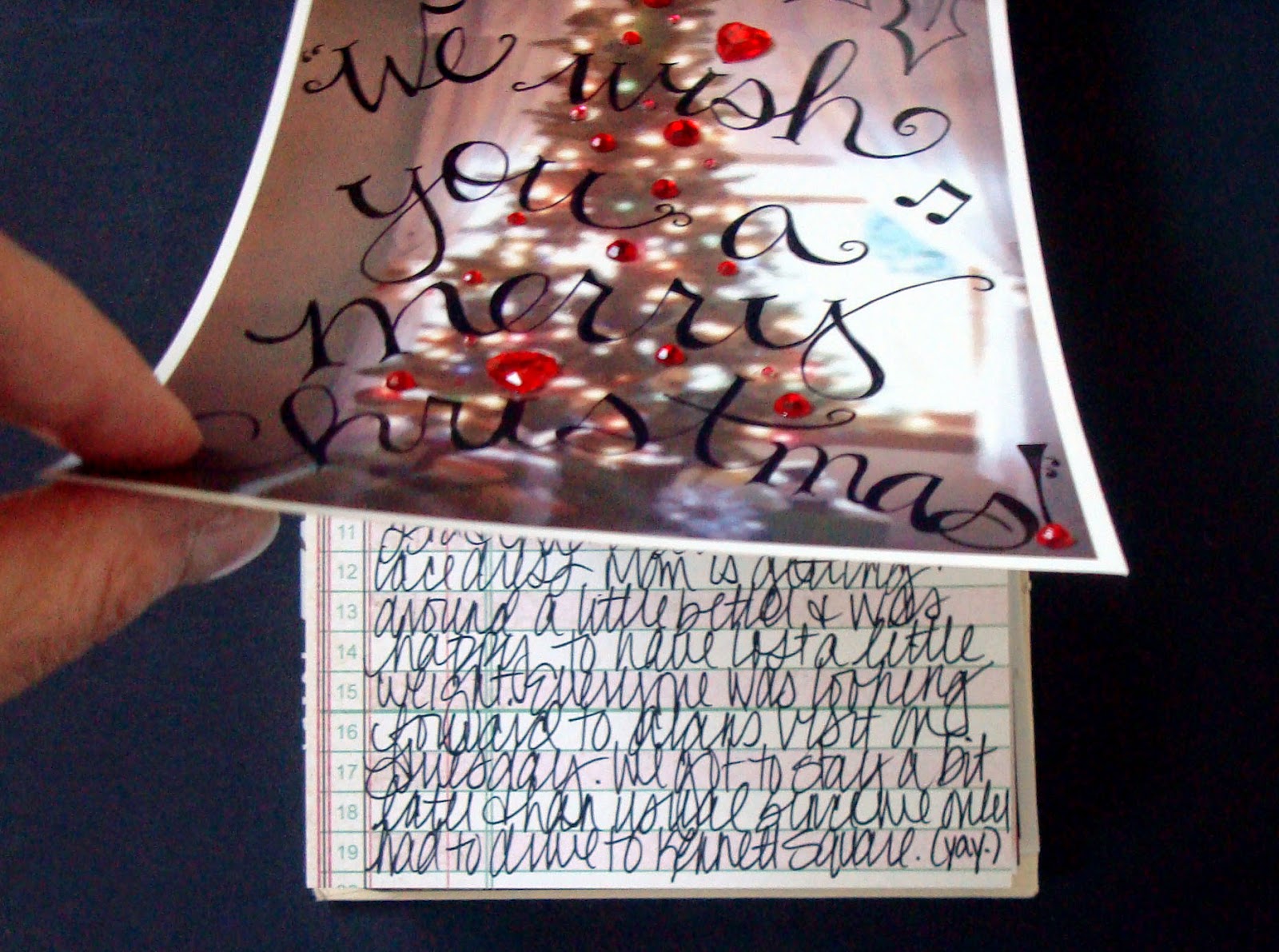 so i played around with filters and levels, printed the best version of the one pic i had, did some handlettering on top and journaling underneath on an attached oversized card. it's not the page i envisaged, but again it illustrates a nice point: during the holidays, it's more important than ever to just ROLL WITH IT. yeah, i can do that. 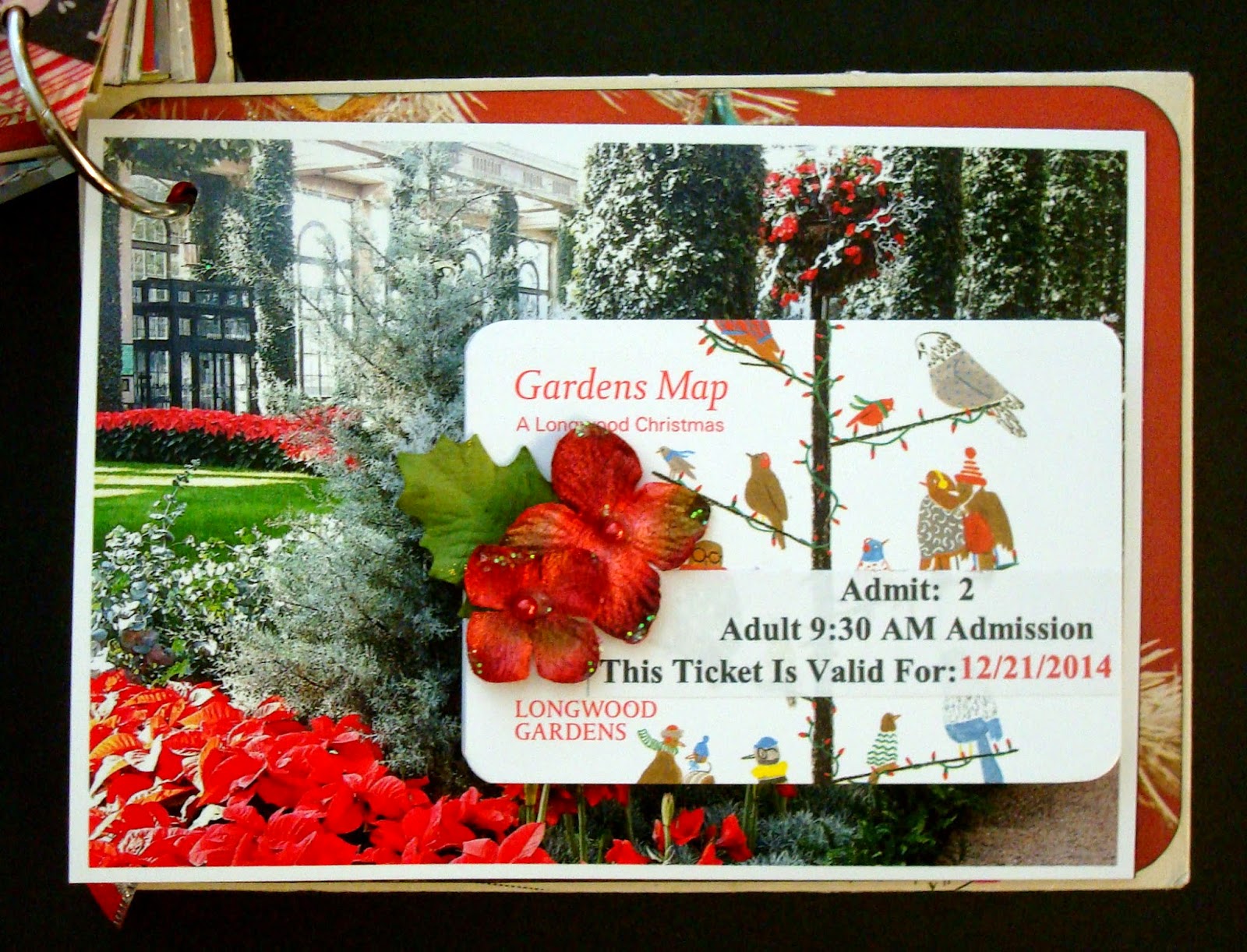 dd21: longwood christmas
conversely, from our day at longwood gardens, i have waaaaaaaaaay more photos that i could possibly ever use. so i didn't even try. i chose one shot i liked, printed it at 5x7, attached the fold-out map and part of our e-tickets, added a couple of dimensional sparkly velvet flowers on top, and called it done. 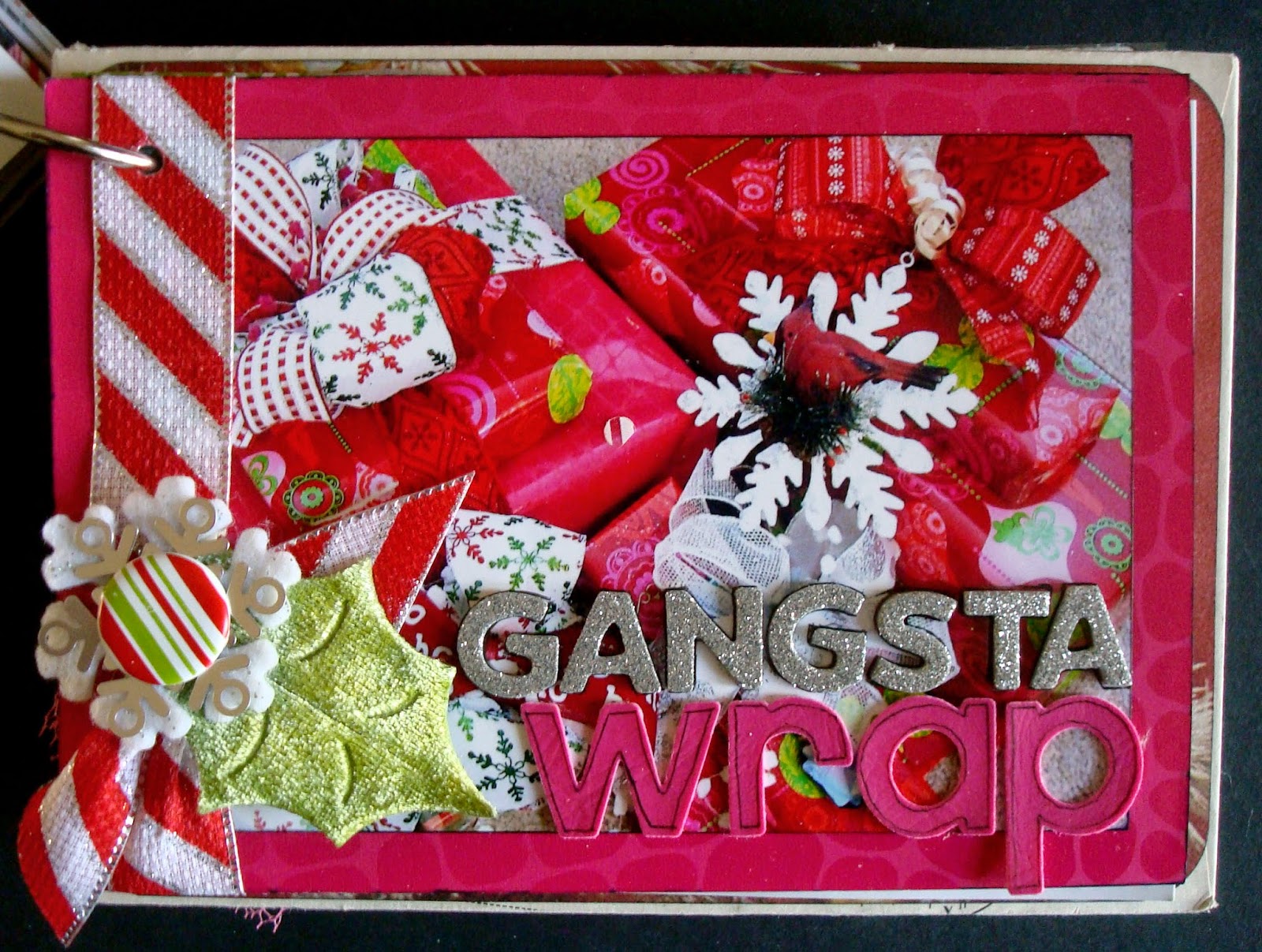 dd22: gangsta wrap
i love wrapping presents. i may have mentioned this about elebenty gazzillion times over the last few years. i like to take pics of gifts i think look especially nice... but they don't need many words, really, so a page covered with one of the textured papers i used, trimmed out with ribbon and featuring a nice big photo and a few thickers works for me. job done. 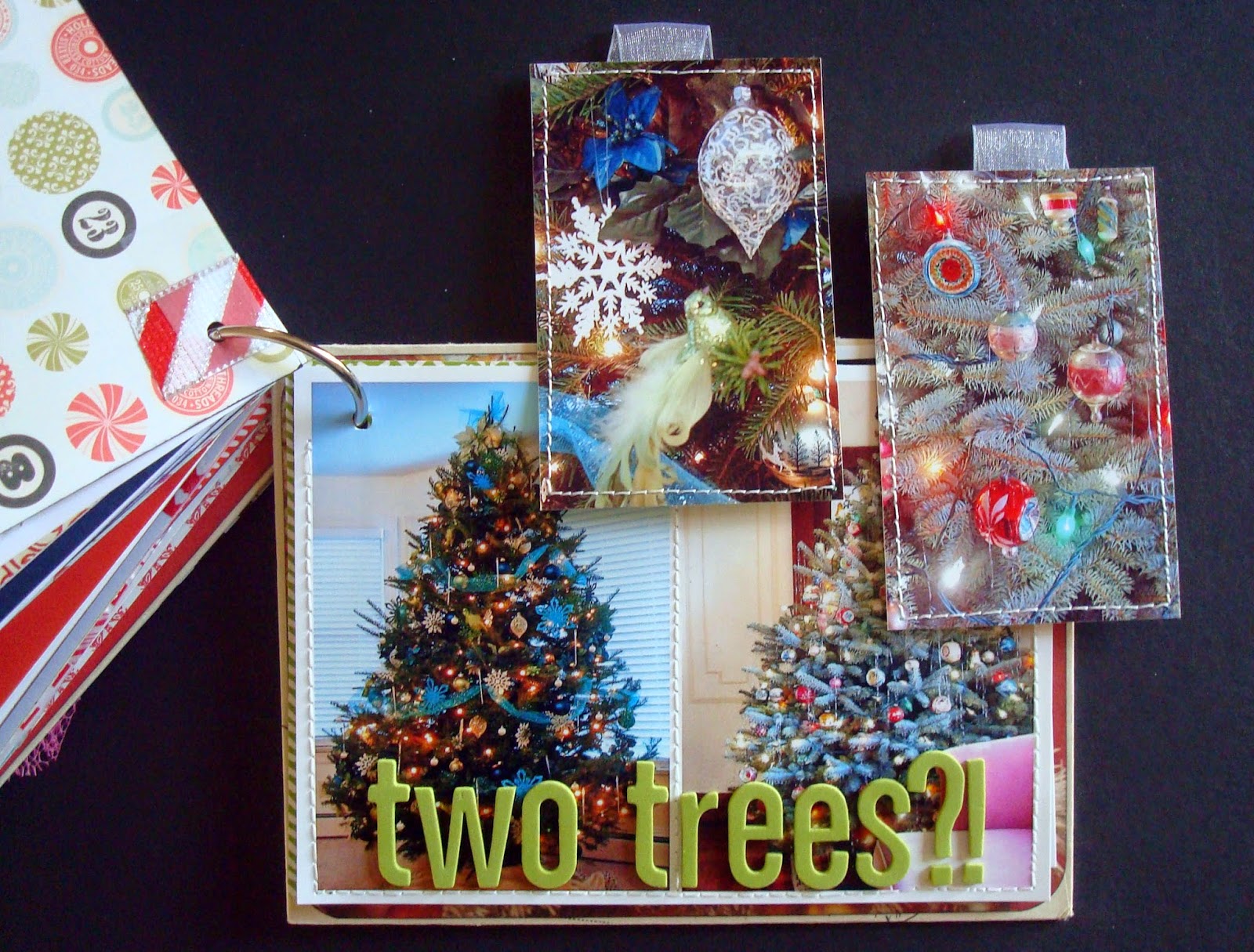 dd23: two trees
here's the only page in the whole album that i might actually go back and add to, or at least tinker with. once again this year we have two full-sized, freshly cut, seriously sparkly, uber-decorated christmas trees. and they are both kinda... well, MAGNIFICENT, actually... if i do say so myself, which apparently, i do! :) i took a pretty good full-sized shot of each and then made a pocket on the back of the page to hold a close-up detail pic of each tree. the back of both little cards holds typed journaling telling the type of tree, what kind of lights and garland i used, and other details i know i'll want to remember next year. i definitely like what's here, but i wouldn't rule out the addition of a few more decor pictures, on a different/extra page. 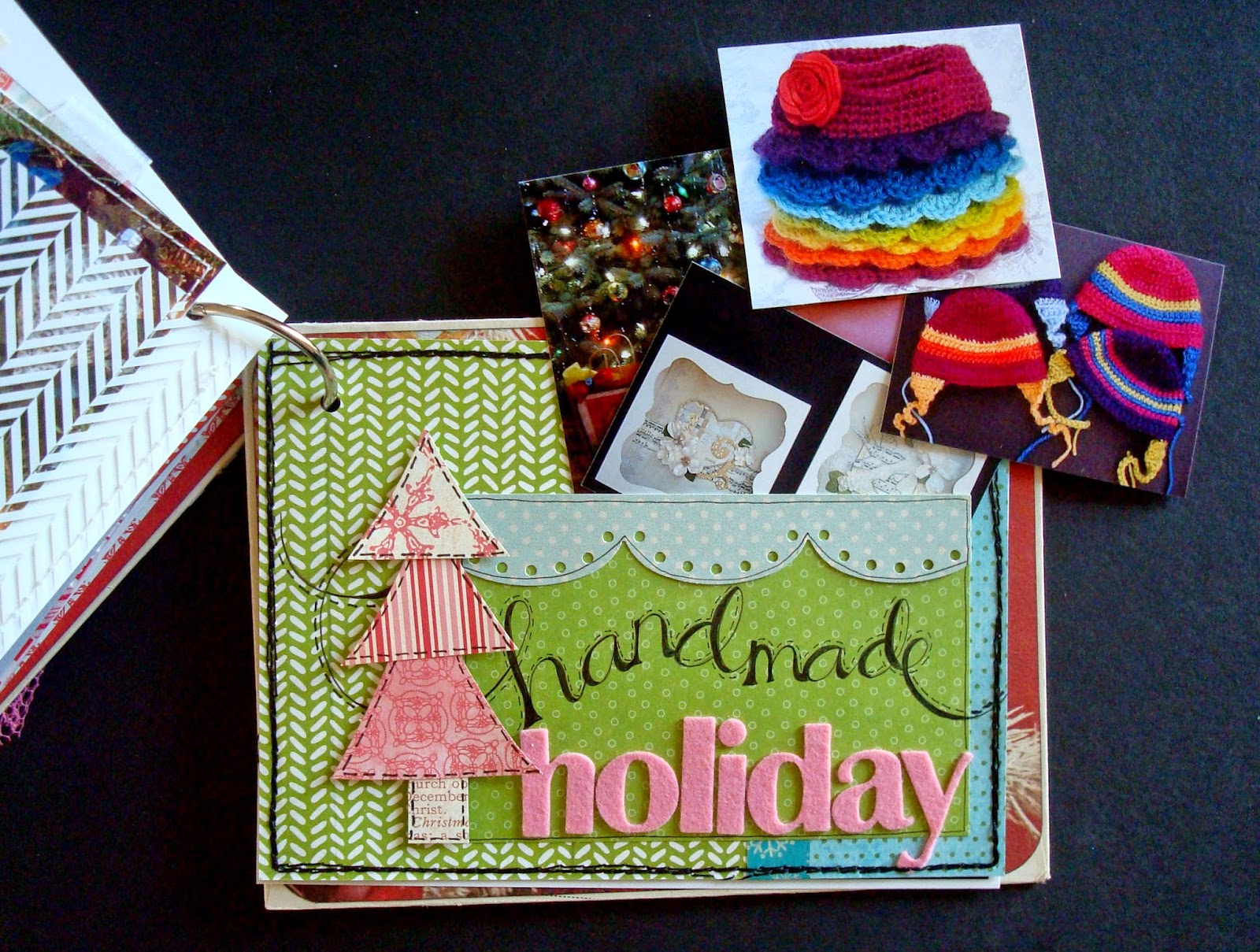 dd24: handmade holiday
i'm pretty sure this journal has more pocket pages than any project i've ever done, and here's another! it holds mini-snaps of the handmade gifts i gave this year: shadow boxes for my aunt and uncle, a funky ruffly rainbow purse for our new niece-by-marriage's little girl, and wooly caps for all the american girl dolls. 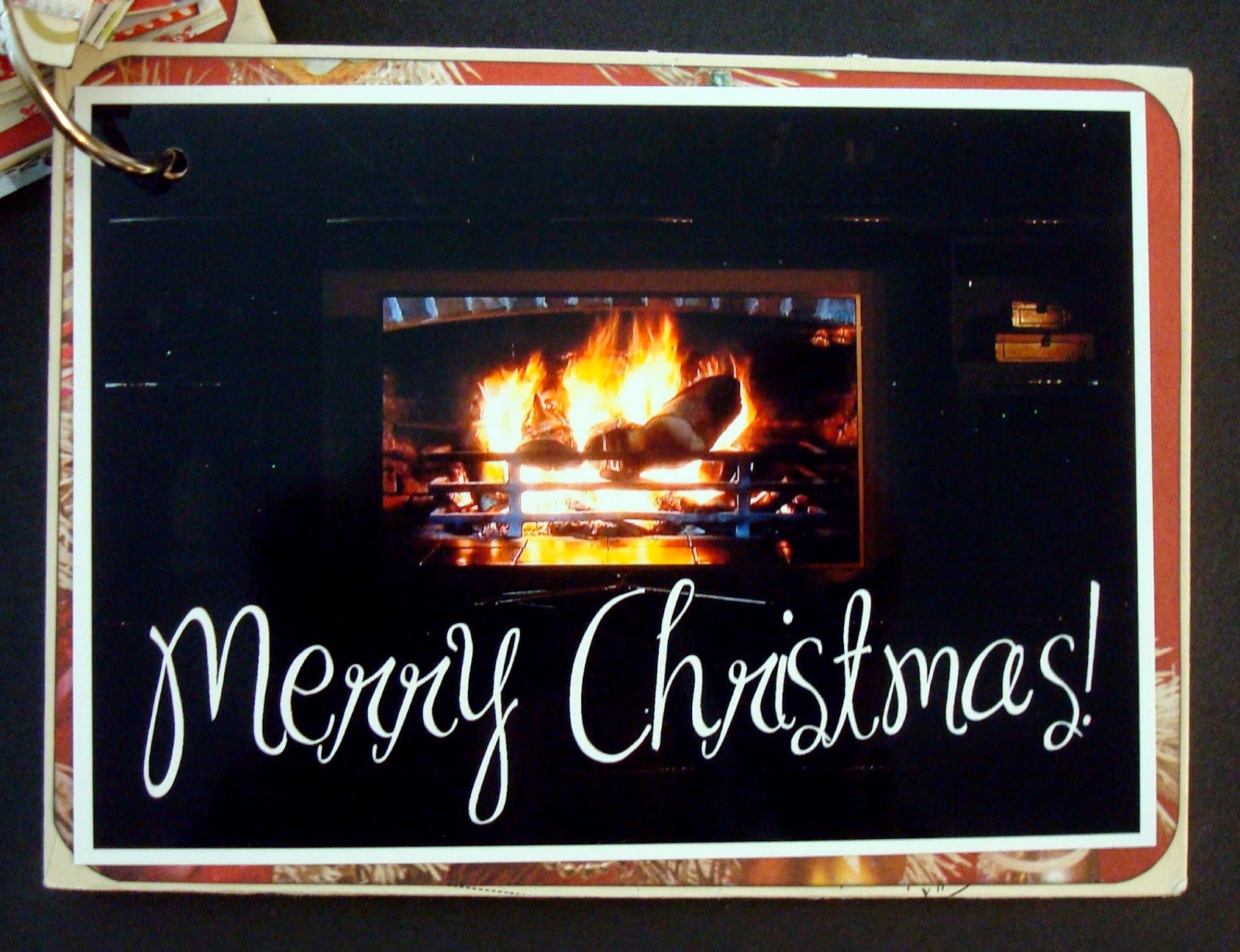 dd25: the yule log
this is probably only funny/interesting if you are me, or possibly if you are my sister. which admittedly, you might not be! but amie and i have both long been obsessed with the televised burning yule log that gets aired on smaller cable tv stations on christmas morning. which it turns out looks REALLY cool on the biiiiiiiiig giant tv that now (still rather surprisingly to me) resides in our living room. so of course i had to take and text a photo of it to my sis first thing that morning, and many, "i hope you have a dvd of fire extinguishers standing by" jokes ensued. again, you probably need to be us to find this even remotely significant but to me it seemed a fitting image to conclude this year's december daily festivities! 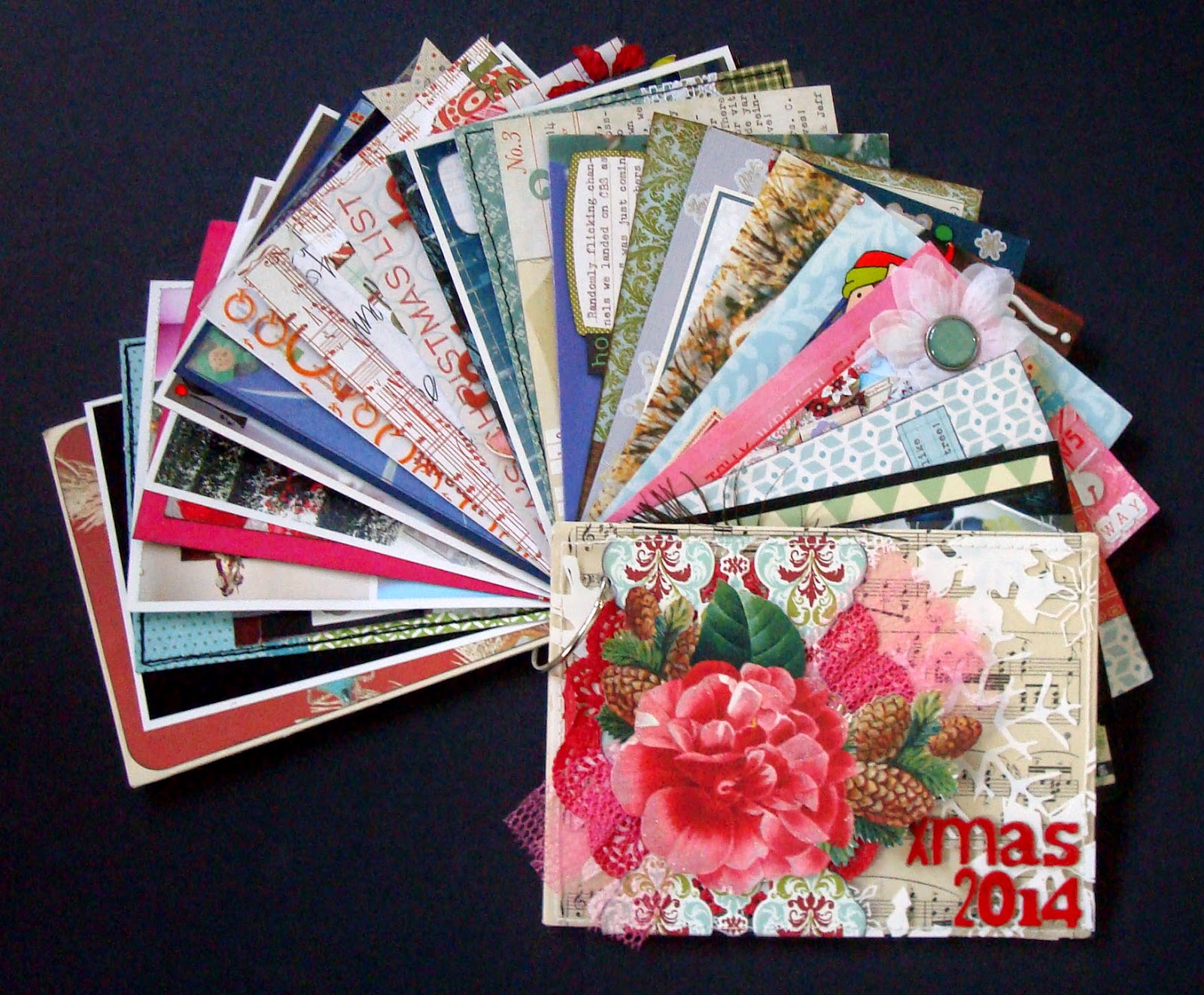 december daily 2014: the big sprawl
no journaling project of mine could be considered complete without the sprawly picture of the finished book, so here's this year's version. below, a more restrained photo of the same thing: 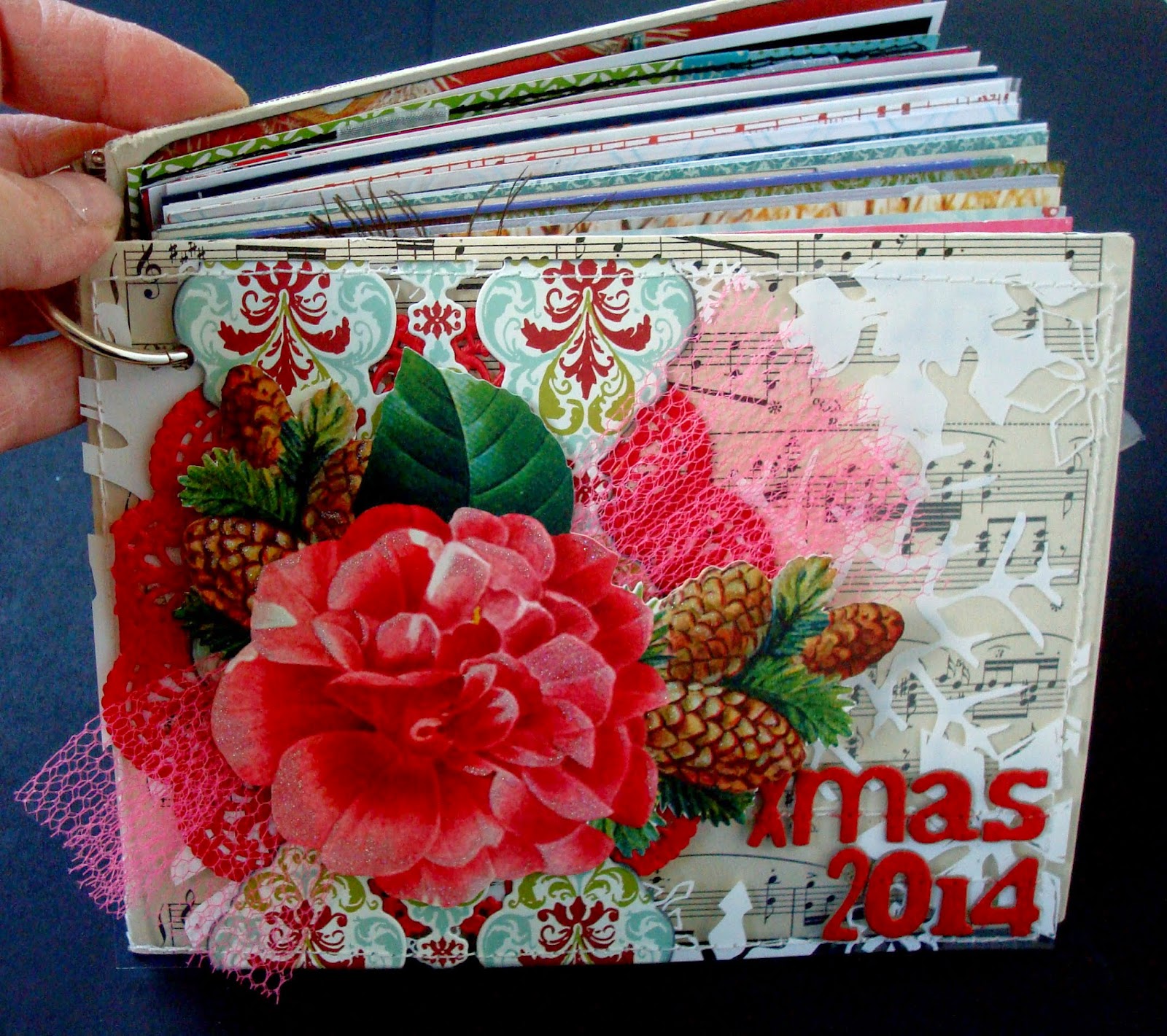