at age four, nephew matthew is *SERIOUSLY* into dinosaurs. he knows quite an impressive amount about them, too: the names of many different species, which ones were carnivores, herbivores or omnivores (and yes! he uses those words!) where they lived, and so forth. i was actually slightly worried that this particular example might not be deemed anatomically correct enough to pass muster with such an expert, but fortunately he also has a nice sideline-interest in stuffed animals! plus, he was VERY IMPRESSED to learn that i had made it by doing something called "crocheting"... enough, in fact, that he asked me *HOW* does one crochet and could HE learn to do it??!?!!?! ♥♥♥ 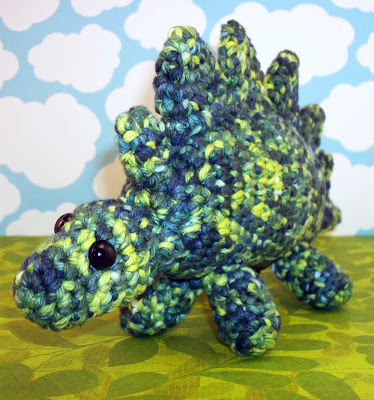 measuring about nine inches from nose to tail, horace is quite a bit bigger than the other amigurumi dolls i've made, but that is mostly because i wanted to use this gorgeous variegated cotton yarn my (non-blogging) friend cheryl hand-painted a few years ago. it's *PERFECT* for dinosaurs, don't you think? i used this pattern from a rather fab etsy shop called planet june. it was well written and easy to follow, and as you can see it's positively OFF THE CHARTS in terms of cuteness!!! i'm proud to say that, according to my sister, (who kindly texted to tell me!) apparently, matthew went around for several days excitedly telling everyone he encountered that he now has, "a yarn dinosaur my aunt made!" ...hard to beat in terms of crafty satisfaction, no?! 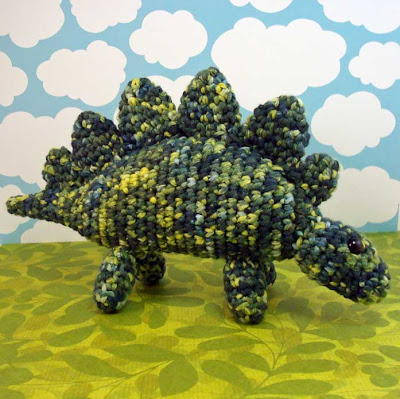 if real stegosauruses (stegosauri??!) had been as adorable as horace, i'm preeeeeeeeeeeetty sure they would not be extinct right now!!! :) :) :)

*after a bit of deliberation, matthew has renamed horace... who shall henceforth be known as MORRIS the stegosaurus. awesome. ♥♥♥
Posted by lauren bergold at 5:26 AM

Email ThisBlogThis!Share to TwitterShare to FacebookShare to Pinterest
Labels: amigurumi, things made of yarn