i don't scrapbook, as such. i do make travel books, which mainly consist of souvenirs, brochures and photos collected from a vacation, punched & held together with a bookring. they have a sort of loose handwritten narrative that i work on each night whilst on the trip, mostly it's an outline of what we did each day, plus any funny stories i want to remember, or details i think would come in handy on a return trip. usually i make them myself from chipboard and patterned paper, and until now they have been finite, covering one trip-- from start to finish and then ending. this works for me, and i really enjoy both making and then owning those keepsakes.
but when it came to new york, i was kind of stumped. because, living in central new jersey, i'm lucky enough to spend a fair amount of time in the city, and i have an accumulation of cool things i've been collecting for years. ...but... we're talking about day trips, with maybe a few overnights; and the "documentation" is sketchy at best. and you can't make a travel book full of completely random, non-chronological and utterly unrelated junk!!
...ummmmmmmmmmm... who says??!?! 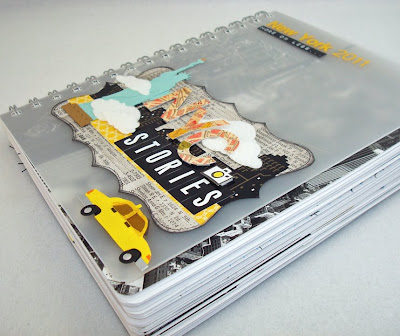 actually, the dictionary definition of a scrapbook is, "a blank book used for the mounting and preserving of pictures, clippings and mementos". DUDE!!! that's totally what i *HAVE*!!! :) 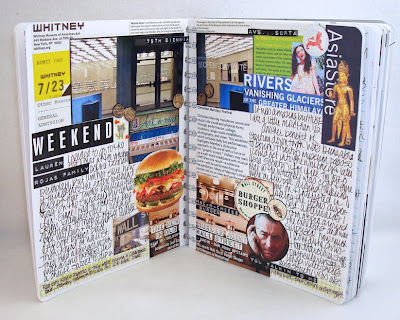 the other thing that's different about this book is that i built it around a ready-made volume. i got this beautiful desk calendar for like $1 at borders in march. i was going to use the abundance of gorgeous b&w new york photos in artwork or... something... but about a month ago it occurred to me that it would make an excellent home for the NYC stuff! 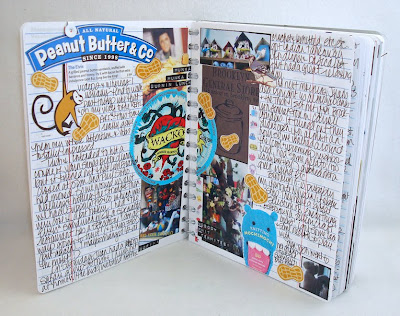 the problem was, sometimes i had loads of "stuff" (tickets, photos, postcards, museum badges, business cards, etc) but no photos. sometimes i had photos--but they're snaps i took b/c they looked cool and don't really relate to anything significant that we did. sometimes i just have stories and nothing at all to go with them. 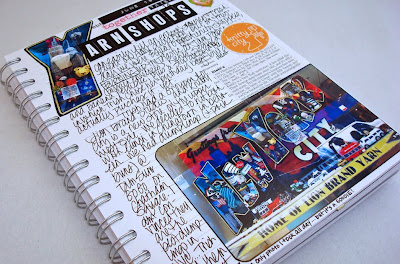 then i had another problem: if i was using a ready-made book, i'd need to work chronologically, wouldn't i?! b/c i wouldn't be able to go back and add or subtract pages! any my stuff is SCATTERY to say the least! some is from 2 weeks ago, some from years gone by, and i don't necessarily know the dates of ANYTHING. 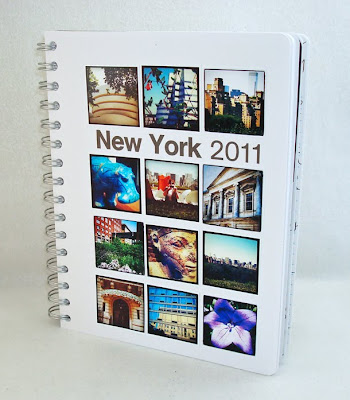 ...but again... why does it have to be in a particular order? up until now everything has been in a couple of hanging files that i'd occasionally take out and flip through. and i still enjoyed taking it out and flipping through it! if i put it all in a book at least i wouldn't have to worry about dropping the file and having stuff go EVERYWHERE, right?! ;) 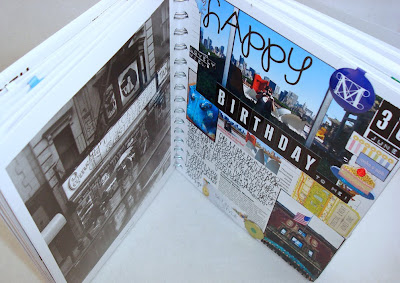 the more i thought about the idea of making everything into a book... however weird and non-traditional that book might turn out to be... the more excited i was about the idea. so i decided to just WING IT. and i did. and i looooooooooove what i came up with! 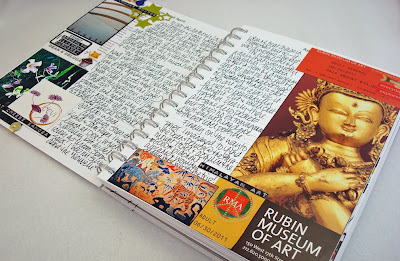 when i had things/photos that related to a particular day, i grouped them together and labelled them, and wrote as much or as little as i remembered from that outing. i deliberately spaced these throughout the book, leaving gaps in between, so that if more are found, they can go anywhere at all. 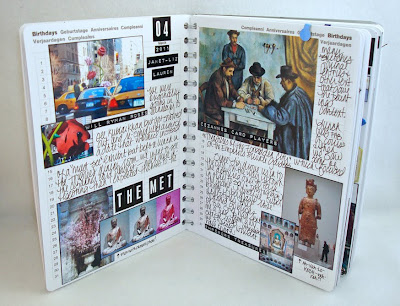 when i didn't have any kind of chronology, i worked thematically. for example, a few years back, my mom asked if i'd take her to see the the xmas spectacular at radio city music hall, which she remembered as a very special treat when she was a girl. that trip spawned other holiday adventures, and now we go every december, to check out the department store windows, have a nice lunch, do some shopping, etc. it's a day we both look forward to each year, and i have loads of stories, but honestly, i could not tell you what happened when, and i don't have many pictures. 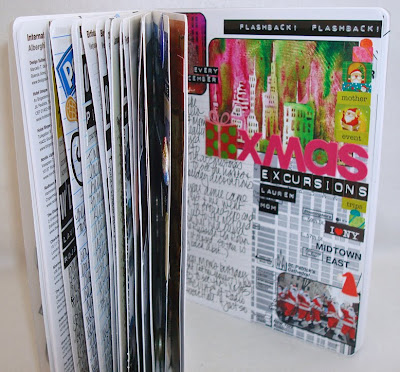 whilst i was puzzling what to do, i found some cool radio city images in a guidebook. and some text about the rink at rockefeller center, and the department stores in a brochure. and i did a google image search and found some GORGEOUS photos! in the end the 4-5 pages i put together capture a WHOLE BUNCH memories, and look cool, too. 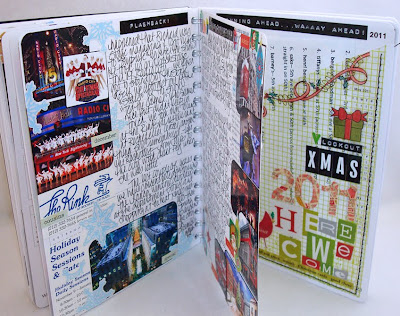 sometimes i have things that are too big to fit, but i want to save them, anyhow. like the "itinerary" i (ALREADY!) made for this year's xmas trip, with as yet un-visited venues i found while looking for the photos i used above. or the national geographic article my friend kim read, that made her want to go in to the city and walk the disused elevated railway through the meatpacking district, called the highline--one of new york's newest and most inventive city parks! (this turned out to be a WONDERFUL day, which i'll blog about it in more detail later!) in these cases i sewed transparent pockets into the book to hold my "treasures". 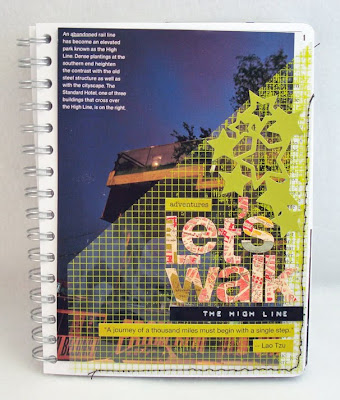 i had (& still have) plenty of photos-- either in a natural state or which i have altered--that i adore, but they just don't go with anything. which didn't stop me from wanting them in the book. i arranged a bunch into a grid for my title page (shown several shots above), and i made a "farewell" page at the end. i expect to fill in here and there with more of these shots. at the same time, i'm keeping in all of the beautiful b&w photographs by christopher bliss. afterall, they are what made me want the book in the first place. 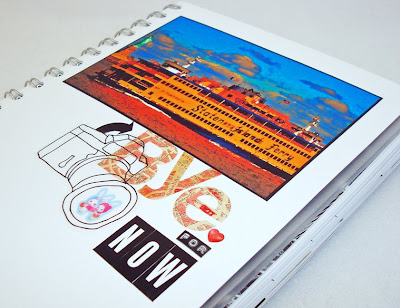 i've also got things like old letterman "top ten lists", and a digi LO i made last year, and funny new york cartoons, newspaper clippings, etc. if i like it, and it's "new yorky" it's going in!!! :) 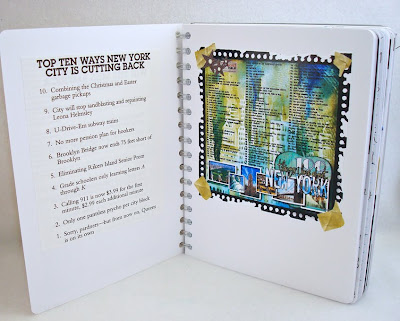 at the very end of this "preliminary session" i made the cover. i very nearly psyched myself out because suddenly, it really MATTERED to me that it should come out well. but by this point i was having soooooo much fun, i don't think i could've made something i didn't love, and i love this: 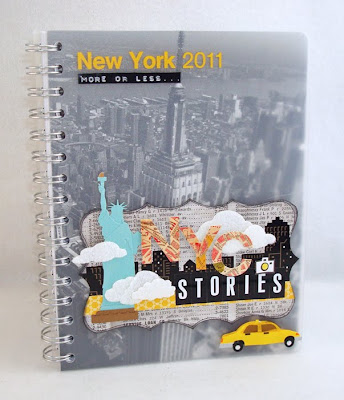 so what's my point in telling you all this, or i am just showing off?! well, yeah, i am a bit! ;) but also, i think there's maybe a bit of a moral here: sometimes, we make things harder than they need to be. sometimes, we get so fixated on problems that we don't stop and consider possibilities. and SOMETIMES if we just trust our instincts a little bit, forget what everyone else is doing, and work only to please ourselves, things turn out really, REALLY cool! ♥♥♥
ps: many thanks, yet again, to the ineffable bruce mau and his incomplete manifesto; especially point #3!!! (process *IS* more important than outcome!) (definitely!) :)
Posted by lauren bergold at 5:58 AM